North Carolina Opera's Faust: The Devil's in the Details 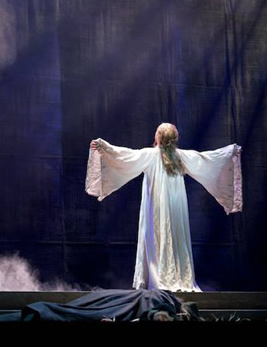 Operas based upon the various legends and dramas about Dr. Faustus, who sells his soul to the Devil, have always fascinated me. During the pre-performance lecture for the North Carolina Opera's radical new production of the Faust, by Charles Gounod (1818-93), General Director Eric Mitchko said the various plays had their origin in a real 15th-century Doctor Faustus, a colorful character who claimed to be able to read fortunes and communicate with and raise the dead, such as Helen of Troy, whom he claimed became his mistress! Villagers believed him to be in league with the Devil; they ran him out of town. Christopher Marlowe's The Tragical History of the Life and Death of Doctor Faustus (1604) is a surviving example of what was once a plethora of plays on the subject. The Doktor Faust (1925) of Ferruccio Busoni (1866-1924) is one of the few operas on the margins of the repertoire based on the original legend. Most Faust operas,  including Gounod's and Hector Berlioz's La Damnation de Faust, legend dramatique,  are at least loosely based upon Faust, the monumental and virtually unstageable play by Johann Wolfgang von Goethe (1749-1832).

According to Hans-Christian Schmidt's program notes to the Teldec recording of the Welsh National Opera staging of the Gounod opera, Goethe's Faust is heavily centered upon a complex Faust "who is driven into the arms of the devil by a cognitive urge, a thirst for knowledge, a wish to achieve, and a hunger for life." Gounod's libretto, by Jules Barbier and Michel Carré, greatly condenses and omits from Goethe and shifts the focus to Faust as "a normal ageing man" wanting youth and love. This massive shift to the seduction of Marguerite and her tragic death led Germans to name Gounod's opera Marguerite until recently.

The NC Opera, lacking a sufficiently large auditorium with good acoustics such as Charlotte's Belk Theater, made a virtue of necessity. Director James Marvel and conductor Timothy Meyers made heavy cuts in the libretto, the entire "Walpurgis Nacht" scene was omitted, as well as small trimmings here and there. No attempt was made to have realistic sets which would have been expensive and time consuming to change. The sets consisted of a large table, a few chairs, six topiary plants, a garden bench, and a holy water font. Characters were in modern dress, costumes were coordinated by Denise Shumaker. All the action was staged in front of the large orchestra on the Meymandi Concert Hall stage. Part of the chorus, well-prepared by Nathan Leaf, was deployed along with the lead singers along the front of the stage while the others were deployed in the upper balconies overlooking the stage. A large screen overhanging the orchestra had brief translations of part of the text under an active, constantly shifting video prepared by S. Katy Tucker. Part of the opera was dominated by a close-up of a human eye (reminiscent of Luis Buñuel), part by visions of Marguerite and various abstract and stylized images such as a flaming human skull, all carefully coordinated with the music. This staging had the considerable advantage of keeping the focus on the interactions of the lead characters and keeping the drama paced forward with little interruption.

Focus on character would have been for naught had not the NC Opera had an outstanding cast of experienced young singer-actors. All the main and secondary characters' biographies listed impressive national and international opera companies ranging from the Metropolitan Opera, Vienna State Opera, Santa Fe Opera, and the Opera Theater of Saint Louis, etc. Tenor Domtri Pittas was fine as Faust, possessing a warm-toned lyric voice, even across its range, soaring to a precise, ringing top. The delivery of his aria "Salut! demure chaste et pure" ( "How pure and chaste this modest dwelling") was beautifully colored and paced. Soprano Mary Dunleavy melds outstanding acting ability with a flexible and gorgeous voice. Marguerite's innocence was perfectly conveyed by "Il était un roi de Thulé" ("There was a king of Thule") followed by her exquisite spinning of the "Jewel Song." Her anguish and pain were heartbreaking in her ""Il ne vient pas!" ("He does not return") as was her distracted madness over the course of "C'est toi!" ("Yes, it's you"). There are few more juicy roles in opera than the Devil, and bass-baritone Christian Van Horn relished every bit of it. His rousing delivery of "Le veau d'or" ("The Golden Calf") at the beer hall and his leering "Catherine, que j'adore" ("Catherina, I implore you") were wonderfully villainous. His sadistic hectoring of Marguerite, "Souviens-toi du passé quand, sous l'aile des anges" ("Think again of the days when you came to the altar"), revealed the full depth of the Devil's evil. His lower range was resonant and perfectly supported.

Secondary roles were as solidly cast. Baritone Lian Bonner superbly delivered the arias, "Avant de quitter ces lieux" ("Now before I leave this place") and curse of Valentin, Marguerite's brother, "Ecoute-moi bien, Marguerite!" ("Now Hark my words, Marguerite!") to rousing applause. Mezzo-soprano Irene Roberts was totally believable as Siebel, the friend of Valentin who is shyly in love with Marguerite. Her singing of "Faites-lui mes aveux" ("Lovely flowers") was lovely and pure. Mezzo-soprano Janice Meyerson brought a rich, solid lower range an alto might covet to the role of Marthe Schwerlein, Marguerite's nosey neighbor. Her aggressive pursuit of the Devil as a potential husband, and his wary attempts to escape, was priceless! Baritone John Brandon sang Wagner's drinking song with fine abandon and style.

Meyers' orchestra played with a remarkable sense of ensemble considering that the musicians came from a number of the state's orchestras and free-lancers with a short rehearsal period. Meyers kept the orchestra's dynamics under tight control so as to never cover his singers. He had so well prepared his soloists and chorus that he was able to keep everything on track despite being located between his vocalists and the instrumentalists. Concertmaster Carol Chung's solo was beautifully played and tightly focused as it soared upward. The brass and woodwinds were strong. Jimmy Gilmore, a recent retiree from the North Carolina Symphony, delivered the accomplished, extensive clarinet solos. Triad-based Robert Campbell led the fine horn section. Gounod scored Faust for four harps but Laura Byne gave it her all in the heavenly finale with the angelic choir.

The staging of the various chorus characters was awkward, in part, because of the confined space.

The opera is repeated April 30. For details, see the sidebar.