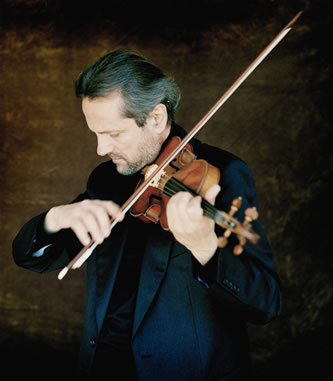 It was not so long ago that Italy was at the tail end of developments in historically-informed performance practice and the use of period instruments, with early music ensembles vanishingly few, and those ensembles which did focus on Italian baroque music employing a style and approach which dated to the initial revival of Vivaldi and his contemporaries in the nineteen-fifties (the sort of thing robustly ridiculed by Peter Schickele in his incarnation as PDQ Bach).

Things have changed, and Duke Performances played host in Page Auditorium to soloist Giuliano Carmignola and the Venice Baroque Orchestra, which uses period instruments (or replicas), and plays with almost no vibrato. Their performances were, for the first three works on the program (focused exclusively on Venetian composers), not entirely convincing, with the smallish ensemble (violins, 3+3, one viola, one cello, one bass, one archlute) producing a sound that was not pleasing – thin, too bright, scratchy, not smooth, and a tuning that was iffy at times. The overall impression for these works (a Vivaldi Sinfonia in A, a Concerto a Quattro in G minor by Galuppi, and the Concerto in G, Op. 7, No. 4 by Albinoni) was scrappy, that perhaps the music had been under rehearsed – at any rate, one could imagine numerous North American ensembles that could have done the job better.

All this changed when Giuliano Carmignola appeared on stage. Slender, handsome, taller than anyone else on stage, the violin soloist cuts a romantic figure – think James Bond, or perhaps one of his archenemies. He has technique to burn, played with a sweet tone, and good tuning. He plays with the extremes of expression that this music calls out for, rushing ahead with passion, stomping his accents. Here you will find fire, wit and virtuosity. The Tartini Concerto in A (D. 96) arrived at what normally would have been its concluding Presto, only to move to a lyrical, beautiful Largo, with a poetic superscription asking the rivers and fountains to pour forth tears enough to consume the composer's sorrow. It was beautifully rendered, with Carmignola taking the final diminuendo to the very end of the bow.

The second half offered three little-known Vivaldi concerti (Tempesta di Mare, R 253; in G minor, R 332; and in D major, R 210), all replete with highly virtuosic writing for the violin soloist. To be able to play such difficult music with effortless technical assurance makes mere mortals think that some magic, or even deviltry, must be involved. Carmignola certainly deserved his standing ovation, and rewarded the listeners with two encores (a "Winter" - first movement - taken at the very limit of presto, and another Vivaldian first movement).