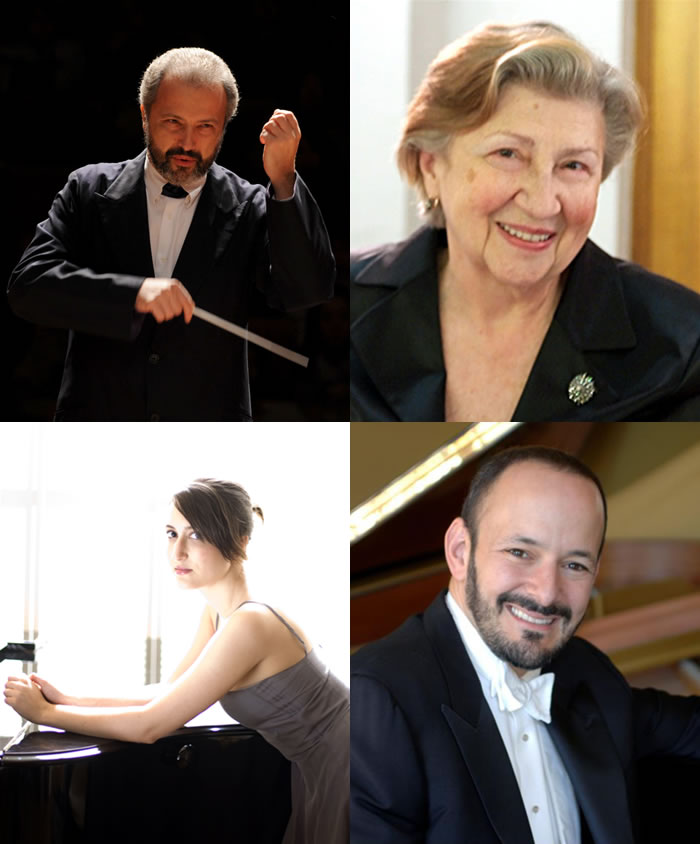 Opening the evening was Haydn's magnificent four-movement Symphony in G. The symphony reveals Haydn in full possession of his compositional powers. Tunes seamlessly follow without hesitation, changes in texture and character reveal humor and an understanding of audience expectations. And the GSO was on — maybe because Malina was back in the saddle, maybe because of the optimistic nature of the symphony itself.

The first movement begins with an ominous slow introduction, which serves as a foil to the scurrying Vivace that follows. The second movement Adagio features a solo cello (forcefully played by Beth Vanderborgh) that breaks away from the section to add a very unusual and distinctive color to the proceedings. The Minuet is full of sturdy Austrian peasant-sounding tunes and rhythms; the Trio put great playing from the GSO winds on display. The Presto Finale brimmed with good spirits.

Throughout, the GSO performed like a well-oiled machine with a heart. Infectious tunes seemed to delight both strings and winds, the many lively passages were cleanly played, and the fun was shared by all, including Malina, who seemed to be smiling throughout the work.

The aria "L'Amerò," ("I shall love her"), from Mozart's early opera Il Ré Pastore brought daughter and father Sitkovetsky together on stage. Julia (soprano) and Dmitry (violin) collaborated with the orchestra for a lovely moment in the spotlight. The singer is certainly center stage, with the violin answering her phrases with heart-felt warmth. Ms. Sitkovetsky's voice is lovely, and the high and fast passages were solidly in tune and expressive; Mr. Sitkovetsky's playing was a model of decorum.

Ms. Sitkovetsky immediately returned for a performance of Vivaldi's motet, "Nulla in Mundo" ("In this world there is no honest peace"), with Maestro Sitkovetsky at the podium, and Malina at the keyboard (in this case, a 9-foot Steinway instead of a harpsichord, which the score calls for). Formally, the music consists of an aria, a recitative, another aria, and a concluding "alleluia," with vocal line mostly accompanied by keyboard and cello, with the orchestra providing a contrast in texture.

Ms. Sitkovetsky's voice was well suited for this showpiece, designed to display various acrobatics from the voice, which were especially noticeable in the final coloratura passages — music full of swoops and scales at a fast clip.

The second half of the concert began with Handel's Arrival of the Queen of Sheba, taken from the opera Solomon; a thinly veiled concerto for two oboes, wonderfully played by Mary Ashley Barret and Anna Lampidis.

The program concluded with Haydn's Concerto for Piano and Violin in F, a work written when the composer was 24 — the composition offered a nice comparison with the mature work that opened the program. While this work is pleasing and elegant, there is not much of distinction in the music. The performance, however, with Mr. Sitkovetsky on the violin and his mother, the esteemed Bella Davidovich on piano, was wonderful to hear.

This is a three-movement work that approximates chamber music, with violin, piano and the orchestral strings serving as three equal partners. Sitkovetsky's playing was silky and nuanced, and Davidovich's pianism was sparkling. Especially fun was when mother and son played cadenzas together — great music making and family bonding time.

Speaking of bonding time — all three generations of Sitkovetskys joined together for an encore: "Le bonheur est chose légère" ("Happiness is a light thing") from the opera Le Timbre d'argent by Camille Saint-Saëns. The composition offered a wonderful opportunity to have all three take the spotlight by turns. A nice touch to a delightful evening of varied music.