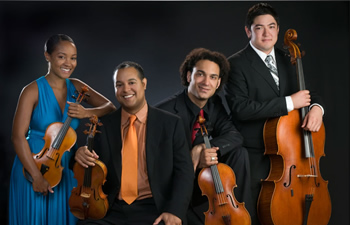 The UNC Charlotte Chamber Music Festival presented The Harlem Quartet at Robinson Hall. In the program book festival director and UNC Charlotte professor David Russell wrote that performing chamber music requires "the fundamental ability of individuals to share, yield, and lead in appropriate balance and for the greater good." Performing jazz does, too, which is why the trumpeter, composer, and eloquent jazz spokesman Wynton Marsalis often uses jazz as a metaphor for democracy.

Mr. Russell and Mr. Marsalis both speak the truth, and to witness a fine chamber music performance or jazz session is to reaffirm one's faith in cooperation, communication, and the common good. The Harlem Quartet concert was a bit of both. The first half focused on two fine challenging works from the 20th-century Russian repertoire; the second explored recent string quartet compositions by two celebrated jazz musicians, including Mr. Marsalis himself. The quartet excelled in each instance.

The program opened with Dimitri Shostakovich's String Quartet No. 7, Op. 108, written in 1960. Dedicated to the memory of his wife, who had died in 1954, this quartet is brief and expressive. The first movement is built on short, disconnected rhythmic phrases and implies a certain agitation or even irritation, until the first violin comes in with a high lament. The sorrow hinted at there receives full expression in the Lento, which follows without pause. The second violin plays a continuous stream, into which the other instruments weave their voices. The final section opens with a mournful melody in the viola, but the tone becomes more intense as the instruments enter a rigorous fugal section. The piece ends, though, with a peaceful major chord – the emotion spent.

Older players than the young musicians of The Harlem Quartet would perhaps have conveyed more pathos. The strength of emotion – the truth of it – was more evident in moments of tension than in moments of grief. But their performance was smart, energetic, and musical.

The longer Prokofiev String Quartet No. 1, Op. 50, composed in America in 1930-31, provided ample opportunity for the fine musicians to display their facility and intellect. The first movement, Allegro, is full of vigor. The second movement begins slowly then scampers off, while soulful melodies sing through the busy din. The final movement is the slow movement, marked by an especially beautiful moment towards the end when the cello lies silent and the upper voices join in lyricism. There were times in the slower, more tuneful passages when the tone – the actual sound, rather than the phrasing – lacked emotional depth or presence, particularly in the cello. Nevertheless, the quartet's performance was excellent throughout this challenging work.

The Harlem Quartet was founded in 2006 by the Sphinx Organization, and each of its members – Ilmar Gavilán and Melissa White on violins, Juan-Miguel Hernandez on viola, and Paul Wiancko on cello – was a first-place winner in the Sphinx Competition. The aim of both the organization and the competition is to diversify the classical music demographic by providing educational and performance opportunities to young Black and Latino musicians. The Harlem Quartet takes the mission a step further by presenting a diversified repertoire, highlighting works by minority composers.

Before taking an intermission, the quartet demonstrated that diversity, as well as their versatility and sense of humor, by performing Billy Strayhorn's "Take the A Train." Playing without scores/charts, the group gave a lively performance of the jazz standard, each member standing to improvise a chorus – or half-chorus – with wit and style.

The relaxed and jovial atmosphere introduced by "A Train" was continued throughout the program's second half. Before playing two movements of Chick Corea's Adventures of Hippocrates, the quartet's first violinist recounted that the group had performed this piece for Corea at a special concert honoring the jazz pianist/arranger/composer. Corea was so pleased that he invited The Harlem Quartet to play with him at the Blue Note and is also composing a work especially for them. Composed in 2004, Adventures of Hippocrates is Corea's first string quartet piece and it is both engaging and well written. Part I is a tango that sounds much like music by Astor Piazzolla. Part V is a quick-tempo rhythmic romp. In both parts the string writing is natural and idiomatic, with pieces of melody passed effortlessly among the instruments, and the playing was terrific.

Wynton Marsalis is a proud New Orleans native, and his At the Octoroon Ball evokes scenes and circumstances from his storied hometown. The Harlem Quartet performed three of the work's seven movements. "Rampart Street Rowhouse Rag" depicts, as the first violinist told the audience, a "house of ill-repute." The viola and cello share the left hand stride of ragtime piano, while the violins whinny and whine and sing with dissonant drunken humor and sass. "Mating Calls and Delta Rhythms" recreates the nighttime sounds heard in the Louisiana bayous. The instruments whirr and click and squeak and moan, and melodies emerge from the ruckus to entwine in satisfaction. "Hellbound Highball" is, as the violist described, a train bound for Hell that teases its passengers with frequent stops and starts, giving false hopes to those looking to escape. Techniques reminiscent of the bluegrass favorite, "Wabash Cannonball," recreate the whistle, brakes, and chugs of the train. But the train never completely stops; instead the four musicians get up and walk off stage, still playing.

They came back, though, to reward the boisterously approving audience with a special encore: "My Little Conga," written by the first violinist's father. Both a reference to the dance and the drum, the delightful piece hustled with a conga rhythm, stopping to allow the cellist and first violinist to tap and beat their instruments in vigorous Latin jubilation.