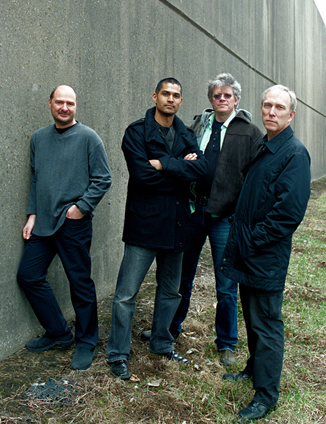 There have been several memorable concerts by the Kronos Quartet at Duke University, but even by those high standards, this program, and the events leading up to the performance at Page Auditorium, were transformative in several respects. Once again – and the season is not over yet – Duke Performances has shown that an arts organization need not be merely a booking agency. Over the course of a few days they teamed up with a local club in rapidly revitalizing downtown Durham, presented 2009 Pulitzer Prize winning composer Steve Reich in a discussion of his prize winning work Double Sextet, held a free open rehearsal by the Kronos Quartet of a soon-to-be premiered work by Duke Ph.D. candidate David Garner, and finished off with the Duke commissioned world premiere of Steve Reich's WTC 9/11 in a Kronos Quartet concert that featured all of the works written by Reich for Kronos – also a first!

Native New Yorker Steve Reich is universally recognized as the most influential living composer as he dismissed the stodgy, cerebral and academic-based compositional styles of the 50s and 60s and developed a brand of music that focused on small musical cells, repeated patterns, slow-moving and relatively simple harmony, and use of counterpoint. In his talk at Pinhook, the previously mentioned Durham club, he told us that one of the great influences on him was the 12th century French composer Pérotin. Surprisingly, after listening to an excerpt, it made a lot of sense: everything old is new again.

In 1988, using what is now considered primitive technology, Reich wrote Different Trains for Kronos and it became a seminal work for both. Using pre-recorded voices and string parts, this work depicts train travel in the early 40s from New York to Chicago to L.A., but then ominously switches to the use of trains in Europe during that time as death conveyances to concentration camps. The primary musical effect in this work is the musicians' evocation of the speech patterns of the recorded voices. That job fell primarily to violist Hank Dutt and cellist Jeffrey Zeigler as they both succeeded in coaxing out of wood, strings and hair a sound eerily human. As David Harrington, first violinist of Kronos was to say in a question and answer session after the concert, this work marked a new era for them as from that point on they hired and always used a sound and lighting designer as well as an audio engineer.

The highlight of the evening, the world premiere of Reich's WTC 9/11, is very similar in its pre-recorded effects as Different Trains. Using publicly accessible recordings by NORAD and the New York City Fire Department, as well as neighbors of Reich who lived just four blocks from ground zero, he developed an experience that went beyond music as this was something that we not only all shared, but was a "before and after" point in many of our lives. The insistent emergency signals of the violins were a mixed message of chaos and first responders attending to their public duty as the world as we knew it was coming apart. "WTC" also stands for "World to Come" portrayed in painfully sustained, nearly static harmonies at the start of the third movement: a brilliantly composed representation of Shmira', the Jewish practice of guarding the body from death until burial, which actually took place in the days following the attack. The piece ended, quite frighteningly, with a recap of the staccato NORAD beeps while a voice intoned in Hebrew "The world to come, I don't really know what that means."

Upon hearing a new, as-yet-unrecorded work for the first time, I have often thought that it would be nice to hear it again. So, after intermission, WTC 9/11 was played in its entirety (about 16 minutes) all over. We were to learn from Mr. Reich in the post-concert talk that it was actually a standard practice for world premieres to be repeated, but that had gone out of favor in the past 30 years. This was a great idea and a fortuitous time to resurrect it: a second hearing was even more musically and emotionally forceful and greatly enhanced the uniqueness of the entire evening.

The evening started off with Triple Quartet, written for and dedicated to the Kronos Quartet in 1999. As the name implies, it is for three string quartets most often played by a live quartet with the two others pre-recorded, although Mr. Reich said it was recently performed at Juilliard by three live real-time quartets. This is Reich at his most elemental: pulsating rhythms, cyclical basic harmonies and canons galore. This was followed by three selections from Reich's opera, The Cave, that explores the roots of Judaism, Christianity and Islam. Like many of his other works, this uses sampled speech and explores musical mimicry of language, although these excerpts were perhaps the most lyrical of the evening.

This concert, and the events leading up to and following it, was an artistic triumph of the highest order. While it is certainly too soon to speak of it in terms of musical history, it was definitely an event which had a profound impact on everyone present. If there was a Grammy for presenters, then Duke Performances should get one for this once-in-a-lifetime event.