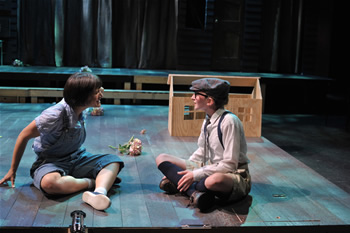 
Liz Beckham and Samantha Rahn in TO KILL A MOCKINGBIRD

Burning Coal Theatre Company is remounting its Fall, 2010 production of To Kill A Mockingbird, and all indications are that this remount has lost nothing of its original power. Adapted for the stage by Christopher Sergel from the novel by Harper Lee, the play depicts the main story of the novel, the trial of a black man, Tom Robinson, for the rape of a local white girl in 1930's Alabama.

Burning Coal has managed to reassemble the entire cast for this presentation, a total of ten actors who together portray 22 different characters in this compact, two-hour work. Of the ten, only three portray just one character: Scout, or Jean Louise, the main character and narrator; Atticus, her soft-spoken attorney father; and Boo Radley, the infamous "monster" who lives on Scout's street. This last one is a bit of a head-scratcher, since Boo has only about five minutes onstage at the end of the show. But it is essential that the recluse remain a mystery until he finally decides to show himself to Scout and the rest of the denizens of Macom, AL.

Scout (Liz Beckham, Tartuffe, Taming of the Shrew) tells us the tale of "how my brother broke his arm" with all the impish charm required of the character. Atticus is portrayed by Roger Rathburn, a veteran actor of stage and screen who lists the part of Atticus Finch as "the role of a lifetime." He portrays Atticus with the soft-spoken certainty that what he is doing, regardless of how it is perceived by his neighbors, is nonetheless the absolute right thing to do. His defense of Tom completely undermines the railroading that is attempted by the prosecution, and Rathburn's closing argument is superb theater.

The other seven actors all portray multiple characters, and several characters are performed by several different actors at different times. Bob Ewell, the main witness for the prosecution, is the play's villain and is ably portrayed by Burning Coal member Fred Corlett, who also portrays a total of six characters. Those who are familiar with Corlett will find it both surprising and satisfying that Corlett gives such a chilling portrayal of this slimy character.

The remaining six actors portray the denizens of Macom, AL, and the principles of the trial of Tom Robinson (Jade Arnold). Mr. Gilmer, the prosecuting attorney, is portrayed by no less than five different actors, who combine to encircle and browbeat Tom while he is testifying. This constant shifting of characters aids in creating the chaos that this trial is creating. The other characters are Calpurnia (Emelia Cowans, Crowns, 1960!), the Finches' housekeeper; Heck Tate (Jeff Cheek, Light in the Piazza, Hundred Dresses), the County Sheriff; Mayella Ewell (Whitney Madren, Hair, The Producers), the young woman who was the supposed victim in this trial; Jem (Adam Patterson, The Country Wife, King Lear), Scout's older brother; and Miss Dubose (Samantha Rahn, Way to Heaven, Annie), the crabby old woman who is a thorn in the side of both Scout and Jem.

The set for this production is deceptively simple. It is a straight thrust stage, but it has a number of strategic traps and doors fit into it. A miniature of the Radley home, a supposed "haunted house," sits downstage left. The only other set pieces are a couple of chairs. This simple staging is simple but highly effective, allowing the actors free movement around the stage while supplying everything that is needed for each scene. This set is the brainchild of Marc Bovino and director Randolph Curtis Rand.

The flavor of the novel is ably maintained in Sergel's adaptation, which brings out different aspects of Atticus' character, such as his supposed dichotomy of a distaste for guns and his ability as a crack shot, a trait that earned him the nickname of "One-Shot Finch." This realization causes Scout a great deal of joy, because she has believed that her father is not at all a "talented" man. Burning Coal's ensemble cast recreates Macom, AL, in 1935 with verve and wit, bringing out the humor of Lee's novel as well as the drama. The only problem with this show, so far as this reviewer can tell, is that so much of the Deep South maintained its bigoted views of Blacks well into the latter half of the 20th century. Nonetheless, Lee's landmark novel and the subsequent play point out the small steps that can be made by brave men and women, even when so much of the world around them is screaming in protest.

Note: This production continues through March 20; for details, see the sidebar.