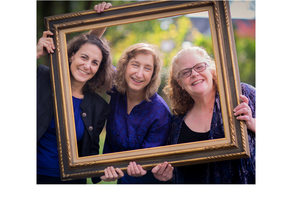 from left: Stephanie Vial, Elizabeth Field, and Allison Nyquist of the Vivaldi Project

This preview has been provided by Baroque & Beyond

The string trio, although largely overlooked during the past century, was manifestly popular in its day - at its compositional peak (c.1760-1770) out-publishing the string quartet by a ratio of more than five to one! These forgotten works, some 2000 string trios by more than 200 composers, reveal not only a wonderful array of instrumental techniques and styles, but also a significant, untold part of chamber music’s history. Since 2015, The Vivaldi Project has been immersed in this study of chamber music’s forgotten genre. With three volumes to date in their critically acclaimed series, Discovering the Classical String Trio (MSR classics), they are set to record Volume 4 in June of this year.

In our own backyard

Each set of recorded trios is the result of a multi-step process involving study, rehearsal, and performance, but which begins with gathering trio manuscripts from libraries and online sources around the world. Imagine the delight in discovering that a completely unknown trio by the virtuoso violinist and composer Maddalena Lombardini Sirmen was to be found right in the back yard of The Vivaldi Project’s co-director and cellist, Stephanie Vial. There in the Rubenstein Rare Book Library at Duke University, among the 48 cartons of research papers left by the late musicologist Jane L. Berdes, lay the more than 250 year old unique manuscript.

String trios not for women?

Classical string trios written by female composers are extremely rare, in part at least because the violin and cello were generally considered indecorous instruments for the "fairer sex" to play. Such was not a concern among the charitable Venetian ospedali, which, perpetually short of funds, sought to cultivate the musical talent of the orphaned or abandoned girls in order to present all-female choral and instrumental performances, whose increasing fame drew ever larger crowds. As Berdes’ research reveals, The ospedali became the first music schools for women, and the best teachers (like Vivaldi at the Pietà) were brought in to oversee the musical education of these figlie. By 1753, 7-year-old Maddalena Lombardini would undergo a rigorous audition in order to enter the Ospedale dei Mendicanti, where she would remain until she was granted permission to leave and marry violinist and composer Lodovico Sirmen in 1767.

In the most recent 3rd volume of their series, The Vivaldi Project recorded Sirmen’s trio op. 1, no. 5. Reviews of the volume often focused on this trio, describing it as "an unalloyed gem," and Sirmen as a composer The Vivaldi Project should record again "as soon as possible." (Read more reviews.) It would have been easy enough to record from among the remaining 5 trios in the op. 1 set of published trios. But how much more exciting for the three women of The Vivaldi Project to be able to contribute a delightful
new trio to the list of known works by Maddalena Sirmen.

Modern premiere of an 18th-century work

The modern premiere performance will be given on Sunday, February 12 as part of the 2023 North Carolina HIP Festival. The program will also include Classical trios by Simon Leduc l’ainé, Joseph Schmitt, Luigi Boccherini, Joseph Haydn, and Lugwig van Beethoven.