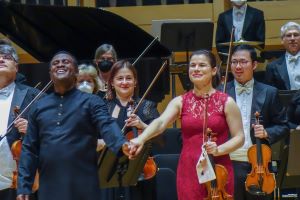 Kwamé Ryan was slated to make his Charlotte Symphony debut at Knight Theater last March in a program that included Errollyn Wallen's Mighty River, César Franck's Symphony in D minor, and Samuel Barber's Violin Concerto with soloist Jinjoo Cho. Cho showed, but Joshua Gersen from the New York Phil and the New World Symphony filled in for Ryan. We could have speculated that Ryan had withdrawn his name from consideration as CSO's next music director, giving way to Gersen as a hot new prospect for our upcoming vacancy. Earlier that same week, however, the native Canadian was announced as one of 10 guest conductors for the current season, so it was clear that Ryan's hat remained in the ring – but he and the Charlotte Symphony would need to fashion an entirely new program.

This time at Belk Theater, the program would be all-20th century – John Adams' Short Ride in a Fast Machine (1986), Erich Wolfgang Korngold's Violin Concerto in D (1945), and Aaron Copland's "Great American" Symphony No. 3 (1946) – and even more American, since Korngold, revered for his many Hollywood film scores, became a US citizen four years before his concerto premiered, with Jascha Heifetz wielding the fiddle. Bella Hristova, making her local debut in the Korngold, was apparently booked after Ryan and the concerto had been placed in the 2022-23 lineup.

If you haven't heard Adams' brisk orchestral bagatelle, the title describes it well. Marin Alsop, recording the piece with the Bournemouth Symphony, appears to hold the land speed record for her Fast Machine among the seven samples I've tracked down, clocking in at 3:58. At the other end of the spectrum, Michael Tilson Thomas with the San Fran Symphony and Kurt Masur with the New York Phil are the sluggards among the conductors on record, leaning more toward Adams' subtitle, Fanfare for Orchestra, than to the work's speed. Tilson Thomas made the best-sounding recording, though Stephen Mosko's performance with the Netherlands Wind Ensemble is definitely worth a listen, even if the woodblock opening the piece – and its insistent marking of time afterward – is tuned higher in the treble. Here the crisp woodblock over the pulsing brass may not have worn out its welcome before giving way to a richer timekeeping shaker when the brass began to soar.

We've heard Charlotte Symphony in this music at least a couple of times before, with Alan Yamamoto at the Belk podium in 2006 and Jacomo Rafael Bairos in an all-American KnightSounds concert in 2013. My review of the Yamamoto performance cruelly credited him with thinning the crowd during intermission, but with Bairos, I could happily note how far our subscribers had progressed in accepting Adams. There was a little helter-skelter in Ryan's reading, maybe a good thing in warding off minimalist monotony, but the audience was downright enthusiastic when the rollercoaster abruptly shut down. Latecomers who were ushered to their seats in the wake of this tasty appetizer could be legitimately pitied for missing out.

Between the evening's two fanfares – for the Copland Symphony famously repackages his well-known Fanfare for the Common Man – Korngold's Concerto made for a lyrically lush contrast. Hristova was more precise than Vadim Gluzman, who introduced the piece to Charlotte with Christof Perick at the Belk in 2005, five years before his fine recording on the BIS label. But Gluzman was more ardent, personable, and charismatic in his playing. You can tell a lot in the opening bars of the Moderato nobile about which direction the soloist intends to take. There's the richer, lusher approach taken by Gil Shaham and James Ehnes that opts for the alluring path I prefer, and then there is the thinner, more gilded approach favored by Sophie Mutter and Itzhak Perlman that aims toward the exquisite and ethereal.

Hristova most resembled Mutter among these four, but I felt that Ryan and the CSO outshone her in the opening movement. She wasn't playing enough with the orchestra's swells, so their oceanic responses to her episodes weren't like majestically crashing waves, and her climactic cadenza lacked fire and confidence. Reaching the middle Romance-Andante movement, Hristova achieved parity with the orchestra, growing tenderer and richer in tone with heightened expressiveness. Better still, she was outstanding in the rousing Allegro assai vivace that climaxes the concerto, fairly dazzling with her ricochet bowing and pizzicatos. Here she was meshing well with the folksy ensemble as they reached the spirited series of cymbal smashes that signal the onset of the finale.

Although Copland's most familiar fanfare doesn't get its Symphony 3 rebirth until the concluding Molto deliberato movement, Ryan certainly understood the fanfare kinship of the opening Molto moderato with the more familiar Common Man proclamation that awaited us three movements later. More in keeping with Leonard Bernstein's CD version than with the initially mopey takes by the San Francisco and Minnesota Symphonies, Ryan threw the themes into an echo chamber spin cycle before emerging at the conductors' common summit: a cathedral of sound that fell away into quiet, mellow sublimity. With a bass drum alarm blast and fresh brass annunciations that dribbled away into comical clockwork pulses of woodwind and percussion, the Allegro molto sounded like a scherzo at first. But when Ryan brought back the heraldry from the brass and drums, the orchestral response was pointedly mellower and mature, cuing us to expect steady grandeur when the artillery returned once more.

Where Bernstein was weepy and wistful, Ryan and CSO applied a gloomy, brooding patina to the other inner movement, an Andantino quasi allegretto. He didn't find the same range of grandeur and folksiness that Lenny unveiled in 1986, but as the piece transitioned without pause into the stately Molto deliberato, there was a wonderful mix of forlorn wilderness and divinity as the quiet woodwinds introduced the familiar Common Man phrase. The brassy orchestral repetition came with all the éclat and majesty you'll ever hear in the similarly crowning moment of Copland's Appalachian Spring, gloriously tattooed with timpani, cymbals, and drums. There was plenty left to do before the second and third series of heraldic salvos, beginning with Hollis Ulaky's magical oboe, escalating to some pre-dawn tweedling from the higher winds, and some shiny "Frère Jacques" tolling from the brass and strings. CSO continued to excel as new variants of the "Common Man" theme mixed with the recurring tolling, simulating an awesome and propitious post-war sunrise. In his apt introductory remarks, Ryan turned our attention – and the ultimate optimism of Copland's symphony – to the current battle for freedom in Ukraine. We could hear and understand the relevance.