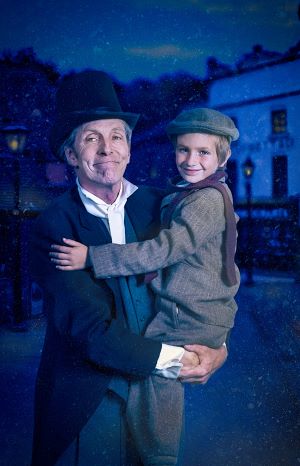 Just when you thought Christmas couldn’t get any happier, Charlie Lovett comes up with a new adaptation of A Christmas Carol, and Little Theatre of Winston-Salem produces it in time to get you all jollied up for the big day.

When Charles Dickens’ A Christmas Carol was first published on December 19, 1843, the first edition sold out by Christmas Eve. Within the year, the novella had gone through 13 printings and continues to be a robust seller 179 years later.

Reasons abound for the enduring popularity of the story: sympathetic and relatable characters; supernatural mysteries; delicious flights of fancy; and a timeless tale of greed, bitterness, tragedy averted, and ultimate redemption.

Now we have an even more joyful version by New York Times bestselling author and Winston-Salem resident Charlie Lovett that adds an unexpected reunion for Scrooge and a hint of it’s-never-too-late romance.

Lovett is best known for his novels The Bookman’s Tale, The Lost Book of the Grail, and The Enigma Affair, all well-reviewed in national media. He is the author of six books of nonfiction, including Lewis Carroll: Formed by Faith, and more than 20 children’s plays.

Ben Baker, one of the Triad’s most accomplished actors, directs the community theatre production with a light hand. Scenic designer Bland Wade has provided a static London street scene against which the action unfolds with different scenes signaled by changes of props, tables, and chairs, and lighting changes designed by Dominick Riches. The sound designer wasn’t credited, but the light and sound team did much to enhance the production, as did costume designers Tara Raczenski and Molly McNair. Perhaps the sound credit can go to music director Michael Lauricella who provided charming recorded music for the party scenes, and directed the actors in a number of a cappella solos and choral performances.

In his debut performance with Little Theatre of Winston-Salem, Robert Bullington brought a refreshing elegance to the role of Ebenezer Scrooge. Tall and lean with long expressive fingers, Bullington transformed Scrooge from bitter, old miser to gracious “founder of the feast” with Shakespearean eloquence. His performance was most touching in the transitional moments when Scrooge is learning his much-needed lessons from the various spirits, enduring the bittersweet legacy of his past, the selfishness of his present, and the dread of what may be to come.

James Crowe, a local theatre regular, served up an eternally optimistic Bob Cratchit, overflowing with unearned gratitude toward his employer Scrooge. Crowe was heartwarming in the scenes with the affectionate Cratchit family and worked well with Amy Fernandez, who plays Mrs. Cratchit. Fernandez was a fitting counterpoint to Crowe in the role of the more pragmatic and skeptical parent.

Among the younger players, Louise Johnson was a standout as Young Belle, Nylah Lee as Scrooge’s sister, Fan, and Henry McNamara as Tiny Tim. All three had wonderful stage presence and inhabited their roles with admirable clarity. Lee exuded believable warmth to Fan and McNamara brought Tim to life.

In the ensemble, JP De Leon made an impressive Little Theatre debut as Topper/Luke/Dick Wilkins. Michael Lauricella vividly distinguished his various roles from Doctor Lutwidge to Gravedigger and all in between. David McDonald was especially fun to watch as Freddy, Scrooge’s nephew, and Mr. Fezziwig, Scrooge’s first employer. McDonald’s Freddy was completely convincing as he both mocked and empathized with poor, old, lonesome Scrooge.

Drew Baker was a spectacular Jacob Marley, the ghost of Scrooge’s dead business partner and the one who appears first, tasked with introducing Scrooge to the journey of transformation that awaits him. Jessica Lofland was lovely – and sparkly – as the Ghost of Christmas Past.

Janice Lovett was fantastic in the role of Christmas Present. Her voice is perfectly modulated and her performance exuded confidence and competence. Christmas Present takes Scrooge on a wild ride through his present life, and guides him from self-pity to empathy for others. Lovett’s interpretation of the spirit was direct and robust, never letting Scrooge look away from the hardship of the world, steadily directing him to confront the two evils of Ignorance and Want.

Though light on stage magic, there were some notable moments of spectacle, especially in the tour with the Ghost of Christmas Yet To Come. Much visually has been left to the imagination, so it’s especially important that all the dialogue be heard. While the sound was quite good for the most part, there was some volume discrepancy among the actors, which needs to be addressed for optimal enjoyment by the audience.

Little Theatre’s A Christmas Carol is an overall lovely production of a seasonal favorite with a twist.

A Christmas Carol continues through Sunday, December 18. Get your tickets quickly because several performances have already sold out. For more details on this production, please view the sidebar.