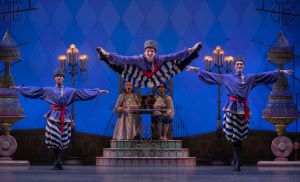 We all knew that last year's Nutcracker was an emergency version, the best means of coping with the Covid-19 pandemic. But this year, advance publicity had whetted our appetite and piqued our curiosity – the largest ever performed in Winston-Salem… including dancers from the Contemporary Dance Department in a classical Tchaikowsky ballet? The new University of North Carolina School of the Arts presentation draws on the tradition of the original 1892 Russian production, some of which still enriches the current show.

UNCSA School of Dance choreographer and director, Ilya Kozadayev, pulled out all the stops in this new successful production which includes over 50 students and faculty members from non-dance departments as well as the whole School of Dance and an orchestra of over 50 students from the School of Music. All dance roles alternate to allow the dancers adequate rest and recovery. The large audience filling the Stevens Center responded by testing the orchestra's rhythm, enthusiastically clapping on some loud passages!

The ballet by Pyotr I. Tchaikovsky is based on a story by E.T.A. Hoffmann as retold by Alexander Dumas (author of The Three Musketeers, among other works). In the story, life-sized mechanical dolls (automatons) are brought to the Christmas Party by the strange but loveable inventor, Mr. Drosselmeyer, assisted by his nephew, Fritz. These life-sized "toys" march and dance to entertain the guests while the children watch spell-bound as one feat of magic follows another. The audience was astonished by the realistic mechanized dancing new to many of us - as well as the elaborate modern choreography of Herr Drosselmeyer, danced by Chandler Davidson on the opening night.

In the new version envisioned by Kozadayev, Clara, admirably danced by Dana Shelton, is more mature, having outgrown ballet slippers and graduated to toe shoes (pointe shoes). Fritz, Herr Drosselmeyer's apprentice and nephew, is correspondingly older, allowing the choreographer more possibilities of incorporating them in solos and duets (pas de deux). This made the transition from the Act I battle between toy soldiers and the mice more believable as they both danced several portions of the Snow Adagio together, alternating with the excellent Snow couple, Sofia Johnson (Snow Queen) and Will Whitney (Snow King). I was personally pleased that the new "Snow pas de deux" adhered to the adagio quality of the music so closely and that the dancers filled the space so well.

After the party is over the story becomes a dreamy fantasy where mice battle toy soldiers under a growing Christmas tree and our heroine, Clara, saves the day! The scene magically shifts to a snowy clearing in the woods and Drosselmeyer's party gift, a wooden nutcracker, painted to look like a toy soldier, magically turns into Fritz, a suave and elegant partner.

The second act takes place in a dreamy candy-land with all kinds of imaginary characters bearing Chocolate from Spain, Coffee, only a half portion (demitasse?) from Arabia, Marzipan from the South of France and even the Czar's own Cossack Soldiers make an appearance. This year the beloved Mother Ginger with her brood of children was restored with a surprise ending… The lead flower, "Dew Drop," was charmingly danced by Ruiko Jacobs, but I missed the gradual build up as each entrance of the theme in the orchestra is matched by a build-up on stage, culminating in the glorious Pink Pas de deux. This pas de deux was superbly danced by Aimee Le, Sugar Plum Fairy, accompanied by Gabriel Ramirez, her Cavalier, stopping short of the terrific ending Tchaikowsky proposed to her Pink solo in his score.

The UNCSA student orchestra was well prepared, conducted by returning guest conductor Jiannan Cheng, a faculty member at Rowan University in Salisbury, NC. Some acoustical imbalances occurred, making the lower strings (violas and celli) difficult to hear and exaggerating the loudness of the French horn section. The children of the Piedmont Youth Chorus sang delicately in the first act Snow scene.

As usual the lighting (Penny Jacobus), costumes (Kathryn Grillo and Marissa McCullough) and scenery (Howard Jones) were spectacular and colorful.

Of all the forms of art, perhaps the least permanent and most fleeting are the ephemeral moments of live performance, spontaneously new and often different each time they are performed. Paradoxically, hours of practice are necessary to create the impression of spontaneity. Yet the performer is subject to even the minutest changes, the hall, the temperature, the time of day – not to neglect the artist's mood, disposition or even digestion!

Contrary to graphic or visual arts, which remain largely unchanged for as long as they exist – architecture, sculpture, painting and photography – or literature and poetry which can be made timeless and available upon demand, the temporal arts such as acting, dancing or music performance are artistic expressions which remain only in memory.

The ballet will be repeated 10 times in the next two weeks. See sidebar for details. (In the interest of full disclosure, this reviewer has conducted several hundred performances of the Nutcracker ballet, including many at the UNCSA.)