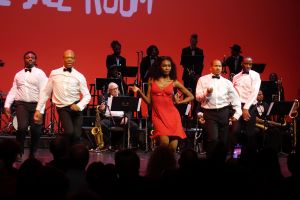 While JFK was campaigning for the White House in 1960, Duke Ellington was out West, arguably having his sweetest year as a bandleader and composer, with an extended stay at the Riviera Hotel in Las Vegas, a festival triumph at Monterey that yielded two albums, and three sweet suites that were released on additional Columbia albums. The Nutcracker Suite marked the first time Ellington and longtime collaborator Billy Strayhorn had worked so extensively on adapting and arranging another composer's music, and the pair did not wait for audience reaction to the Tchaikovsky foray before embarking on a similar project with Edvard Grieg's Peer Gynt Suites No. 1 and 2. Perhaps sweetest of all was the duo's original suite, Suite Thursday, inspired by John Steinbeck's novel, Sweet Thursday, which was set in Monterey. Ellington had played with these homonyms before, wittily naming his 1957 Shakespearean suite Such Sweet Thunder, but after the success of Nutcracker, the wordplay was over: Far East Suite, Latin American Suite, New Orleans Suite, and Togo Brava Suite were albums that announced themselves explicitly.

Although Ellington's embrace of classical music and form was obviously a commercial success, his Nutcracker never became the perennial evergreen that Peter Tchaikovsky's ballet has – with helpful nudges from world-class choreographers and ballerinas. Yet it was still surprising to learn that the current run of Nutcracker Swing performances, presented at Booth Playhouse by JazzArts Charlotte, is an area premiere. One could only grow more puzzled by the delay when trumpeter and musical director Ashlin Parker began tearing into the Duke's score with an able, self-assured 16-piece band. Very likely, JazzArts had also pondered the popularity gap between the ballet Nutcracker and the big band version, opting to fortify their version with jazzy choreography by the co-founder of the New Orleans Dance Theatre, Lula Elzy, delivered with flair by a sassy 12-member dance troupe.

Even more lagniappe was added to the front end of this special JazzArts Holiday Edition, before intermission, with appearances by vocalist Dawn Anthony and a quartet of JazzArts All-Star Youth Ensemble musicians. Warm-up songs included a tasty mix of jazz standards, including Richard Rodgers' "My Favorite Things" and Ellington's "C Jam Blues," and a bouquet of holiday fare: vocals on "Someday at Christmas" and "What Are You Doing New Year's Eve?," a big-band "Christmas Time Is Here," and Youth Ensemble instrumentals on "O Tannenbaum" and "Santa Claus Is Coming to Town." Ensemble's tenor saxophonist, Gustavo Cruz, and bandmate bassist Lois Majors were nearly as well-received as Anthony's high-energy singing, and the first appearance of the evening by the dancers made the instrumental from Vince Guaraldi's Charlie Brown Christmas even more endearing.

Parker and his bandmates had already proven their mettle before we reached the Ellington-Strayhorn orchestrations. As soloists, tenor saxophonist Elijah Freeman, altoist David Lail, and Tim Gordon, doubling on alto sax and clarinet, had also excelled. Yet the band's work on Nutcracker Suite still eclipsed my rising expectations, reminding me why Ellington, before and during the big band era, stuck with Duke Ellington and His Famous Orchestra as the name of his group. Ellington always believed that he wrote primarily for orchestra, but he launched his career and his band during the Jazz Age, so he kept the phonograph and the concert hall in mind when he wrote. That's why most of the earliest jewels in Duke's crown clocked in at approximately three minutes. The nine segments of Ellington's Nutcracker barely exceed a half hour, but it's a hardy concentrate, allowing the aforementioned soloists – and numerous others on the Booth Playhouse stage – to shine and shine again. Hearing this merry music swung live onstage, at sound levels that rose above 90 dB, was astonishing.

The quality of the choreography and the athleticism of the dancers will make it difficult for you to keep track of who is responsible for the instrumental excellence behind them – even when Lail stands up in his red cap and wildly wails. Henry's work on clarinet was nearly as sensational, and Freeman remained rock solid on tenor. Parker's rhythm section shined brighter after intermission, earning kudos for pianist Lovell Bradford, bassist Shannon Hoover, and drummer Kobie Watkins, particularly on the sinuous "Chinoiserie." Elzy's choreography lifted the excitement even higher, with costume changes for the women between their appearances. For the "Toot Toot Tootie Tout (Dance of the Reed Pipes)" segment, appropriately graced by Henry's clarinet, they entered in cool turquoise dresses glittering with snowflakes, and for "Sugar Rum Cherry (Dance of the Sugar-Plum Fairy)," they sashayed in from the wings in hot red. The guys, in casual wear before the break, stuck with white shirts and black bowties afterwards, competing with the gals by executing higher leaps and more jivy steps. After they had been challenged by the women in "Sugar Rum" and "Entracte," the men responded with their finest moves on "The Volga Vouty (Russian Dance)."

Changing the order from the sequence you can hear on Ellington's Three Suites album, Parker and company followed with an epic performance of "Arabesque Cookie (Arabian Dance)," the last and longest track. Here the men remained onstage after their triumphant "Volga" stint, surrounding the alluring alpha female, back in flaming red, while Lail blew his most memorable solo of the night. Out of its usual sequence, "Chinoiserie (Chinese Dance)" brought the full company of dancers back to the Booth stage for a rather startling cooldown, but energy built dramatically for the new finale, "Dance of the Floreadores (Waltz of the Flowers)," – loud, flamboyant, and for my money, the most Ellingtonian chart of the evening. Sensory overload was so total that I lost track of all the fine instrumental solos behind the lively dancers.