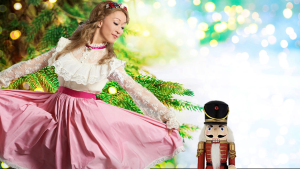 Holiday season in the U.S. inevitably brings with it performances of The Nutcracker, with its evergreen music of Tchaikovsky, written in 1892 and enormously popular for a long time now. This presentation at Thalian Hall, by a group from New York City called Ballet for Young Audiences, had as its explicit intent to present the art of dance to children. The ideal age in this version might be up to ten or perhaps twelve.

This is a valuable endeavor. All of the classical arts grapple with the challenge of how to attract younger audiences. This is necessary for the continued economic and public viability of the Western cultural heritage and its master creative figures and performers. That said, it is not obvious how building audiences is to be done, against the background of limited funding, omnipresent phones and social media, and declining school standards. Performing arts organizations are keenly aware of the dilemma: if younger people are not brought in as audiences, who will be watching our dancers and hearing our musicians decades from now?

This performance illustrated several approaches. First, the piece was greatly shortened. Depending on the version, the full Nutcracker can last up to two hours in performance. This one came in at barely an hour. That meant that each of the acts was perhaps a half hour long, with a substantial intermission in between, providing for relaxation, socializing, and eating.

Second, an emcee described, in theatrical fashion, the story that would unfold in each act. His flair-filled introduction enabled kids too young to easily make the connection between the dance movement and the story, to follow the action and enjoy the tale it told.

Finally, dance students from among the Wilmington area took part in the production. The value of having young students dance alongside professionals cannot be overestimated. The benefit of other children seeing their peers onstage in a professional setting is a great value too.

In the performance itself, the costumes lent glitter and color to the story, while the set and props were basic – putting the focus on the moving figures. The Wilmington children did well, with successful ensemble work. Clara, the focal point of the fairy tale, looked young enough to be from that group and had some lovely moments. Particularly when dancing en pointe, she showed grace and beauty of movement. She had a fine, brief second act duet with the Prince also.

In general, the time scale was too compressed in this abridged version for larger expression to unfold for the adult professionals. The strongest was in the second act, with the succession of national dances. Though they are discreet, with different dancers, there is a line running through them, and this part of the story – in a full-scale production more of a pause in the story – brought some very engaging dancing. I particularly enjoyed the beguiling solo of the Sugar Plum Fairy.

The Thalian Hall program did not contain an insert, and the pre-printed program evidently only allows a single page for each event. As such, though the performers' names were listed, their roles were not. So it is not possible to credit any of the dancers specifically by name here.

The Thalian Hall sound system was unfortunately something of a drawback. It is not fully up to putting forth music with the large dynamic and pitch range of a full orchestra. There was diminished tone quality in both louder and higher passages which significantly compromised the listening experience.

The editing of the orchestral music in order to shorten it, had repeated bumps in the sound as the recording moved over cuts. It is worth mentioning too that the music played during the intermission did not suit the music in the performance. One could imagine instead finding music which would have approached the content and character of Tchaikovsky's Nutcracker score, lending a more complete experience to the ballet. It could have been part of the introduction of young ears to classical performance, in this case via the music, and even if in the background.

Whatever limitations one might point out, they are unlikely to have troubled the young listeners who were the target viewers. On the contrary, both adults and children in the substantial audience clearly enjoyed the performance, and for good reason. One of the nicest touches was after the ballet was over. The dancers assembled in the lobby, and children could have photos taken with them. A real addition to the experience, and a memento! Ballet for Young Audiences deserves gratitude for bringing this artistic opportunity to Wilmington.