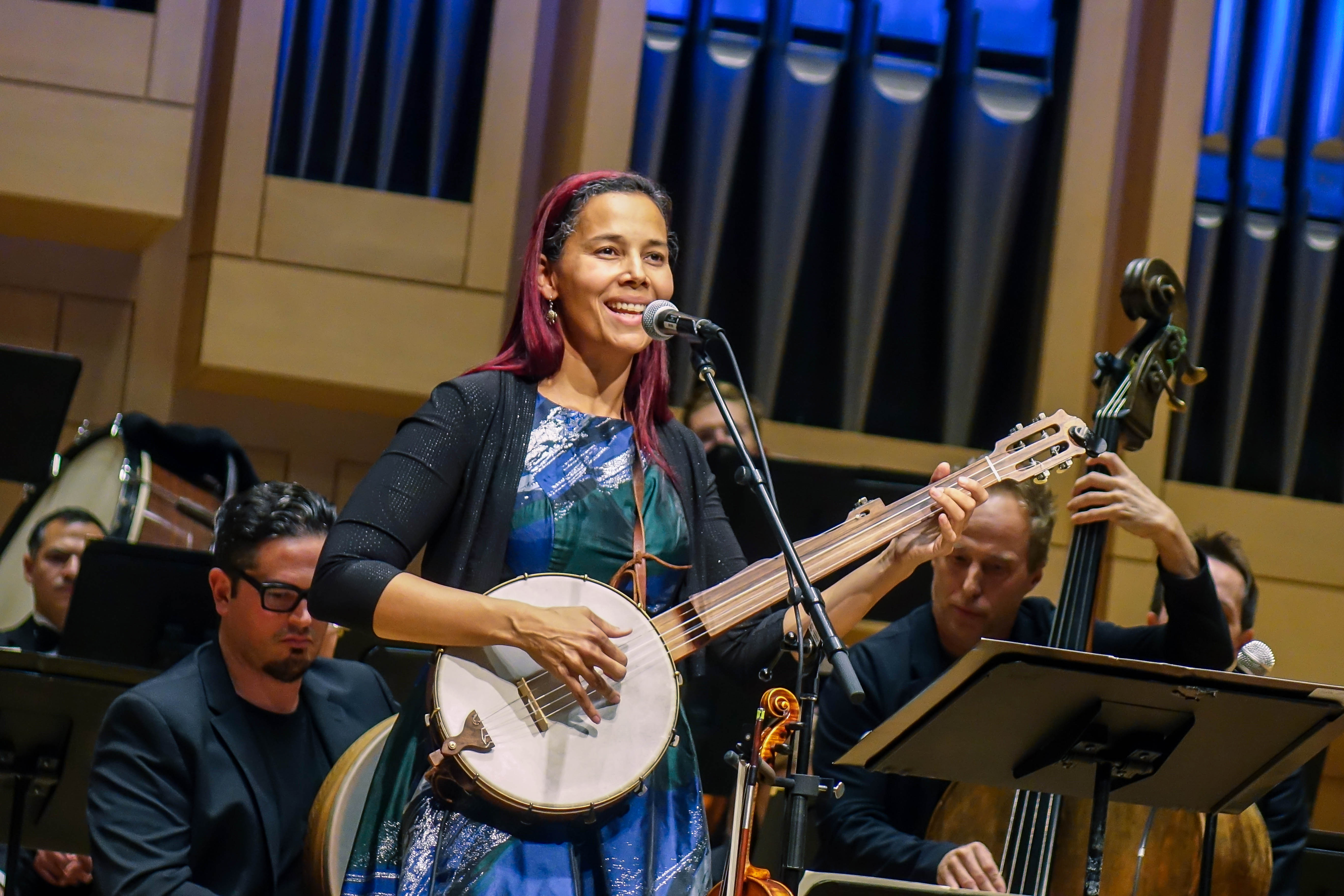 Since the long-anticipated world premiere of her new opera, Omar, at Spoleto Festival USA back in May, composer-singer-instrumentalist Rhiannon Giddens has hopscotched the worlds of folk, jazz, and classical music. Her Spoleto apotheosis down in Charleston was embellished with a sit-down interview event and an outdoor concert with multi-instrumentalist Francesco Turrisi, her collaborator on They're Calling Me Home, the 2022 Grammy-Award-winner for Best Folk Album. Among Giddens' many gigs since then, she has headlined at the San Francisco Jazz Festival and Carnegie Hall before entering downstage at Belk Theater for a rendezvous with the Charlotte Symphony and resident conductor Christopher James Lees. As you might presume of a MacArthur "Genius Grant" recipient, Giddens is not easily pigeonholed.

Yet the Greensboro native co-founded the Carolina Chocolate Drops, her first Grammy Award exploit, and now has an opera firmly rooted in the Carolinas to her credit, so an audience studded with black ties and tuxes had no difficulty embracing the polyglot Giddens as their own – even as she navigated a songlist that included Parisian and Celtic selections. They may not have realized that Giddens had played Charlotte before, as far back as 2008 when I caught her with the Chocolate Drops at Northwest School of the Arts. Turrisi and bassist Jason Sypher, who shared the Cistern Yards stage with Giddens at the College of Charleston in May, accompanied her once again, though Lees and and the CSO lightened their load. Nor was it obvious that Turrisi would be playing piano until late in the concert when he insinuated himself upstage.

As soon as my QR code scanner brought up the evening's program, I could see that the Symphony offerings would be more eclectic, accessible, and daring than the set Giddens performed at Spoleto. Even before Giddens led her trio onstage, Lees and the orchestra demonstrated that they would not be content to trot out the stale and familiar, following up on John Williams' brassy Liberty Fanfare with Samuel Coleridge-Taylor's Overture to Hiawatha, referencing a half dozen episodes from the composer's trilogy of Longfellow-inspired cantatas. In the wake of the fervid Fanfare, a little more finesse could have been applied to the opening of the African Britisher's evocation of the primeval American classic, letting the harp sound more clearly, but Lees was certainly simpatico with the shifting moods and tempos afterward. Violins were gossamer-light in "The Wooing" section, the waltzing section that followed had admirable propulsion, and the cello corps warmed the tenderest episode, before the big build in the "Reunion" finale.

The truly treasurable experiences began when Giddens strode onstage and picked up her banjo; for her first song, "Spanish Mary," was co-written with Bob Dylan, with a fine orchestral arrangement for Lees and the CSO to luxuriate in. Shedding the banjo, Giddens followed up with "Julie's Aria" from Omar, co-written with Michael Abels, reminding us of her own capabilities as an operatic soprano. Yet within minutes, Giddens was delivering a smoking-hot version of "Water Boy," the pile-driving prison song immortalized in recorded versions by Paul Robeson, Odetta, and Harry Belafonte. No doubt, Giddens has listened repeatedly to all three of these cultural touchstones, for the simple hammering arrangement was borrowed from Odetta and Belafonte while the lyrical clarity hearkened back to Robeson. The Odetta recordings of "Water Boy" are unparalleled, particularly when it caps a medley begun with "I've Been Driving on Bald Mountain," shot through with explosive grunts and gasps from the hammer-wielding prisoner. But Giddens has found her own path toward heightening the intensity at the end, and the orchestra beats delivered by CSO added jolts of electricity throughout the piece that simple guitar strums couldn't match. Better still, Giddens' preamble, "At the Purchaser's Option," was certainly a coupling with "Water Boy" that civil rights champion Odetta would have appreciated, repeatedly delivering a "you can take my body, you can take my bones, you can take my blood but not my soul" mantra.

"Mouth Music" was all we needed to hear if we needed assurance that Giddens could make a credible showing at a jazz festival, and there would be more to follow. Lees ceded the stage to the guest trio, lightening the vibe, and Giddens picked up a viola and yielded some of the spotlight to her bandmates, especially Turrisi when he sizzled on his accordion during one of the fiddle tunes. The merriment faded when Lees returned to the podium, replaced by the romance of "Autumn Leaves" en français until Giddens favored us with the English lyric as well. If you hadn't glimpsed the program, just the tropical sway of the violins was enough to announce our return to the Carolinas and "Summertime" from the Gershwins' Porgy and Bess, sweetly sung. Plenty of space was afforded to both Giddens and the orchestra in the arrangement of "La Vie en Rose," and the singer did not seem to be straining to sound like Edith Piaf, which was more than OK with me.

Homing in on the end of the evening, Giddens and the CSO tacked toward the spiritual. With Turrisi at the keyboard, Giddens embarked on this final journey with "He Will See You Through," followed by "Wayfaring Stranger," opting to travel through this world "alone" rather than "below" or "of woe" as others have sung. These songs of faith certainly cleared the way for the affirmation and joy of Giddens' final two selections, an irresistible pairing of "That Lonesome Road" and "Up Above My Head," a perennial YouTube favorite. The last of these was memorably inspired and can be found on track number five of her Tomorrow is My Turn release. We all heard so much "music in the air" that we could leave more than satisfied, even without the planned encore.