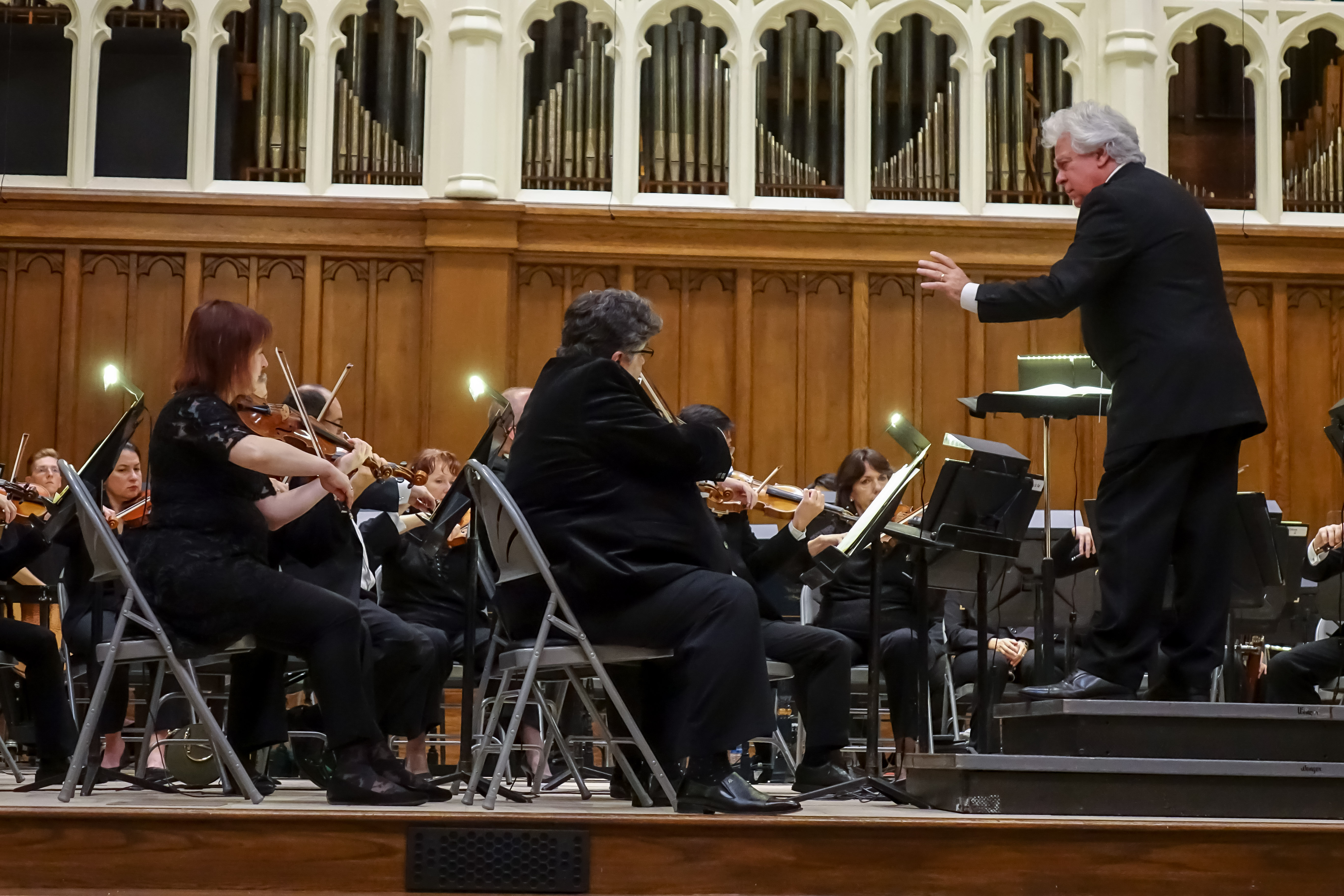 When Christopher Warren-Green took over as music director of the Charlotte Symphony in September 2010, nobody could foresee that his transition to conductor laureate a dozen years later would coincide with the 75th anniversary of the Charlotte chapter of the American Guild of Organists – and the 55th anniversary of the mighty M.P. Möller pipe organ at the First United Methodist Church on Tryon Street. As this confluence became manifest, so did an auspicious event to celebrate it, a partnering of the Charlotte Symphony with the church in a concert showing off the magnificence of the Möller pipes in action. These dual anniversaries provided Warren-Green with his first opportunity to return to Charlotte and perform in his new role, and the glitter of a prestigious occasion was enhanced with Grammy Award-winning organist Paul Jacobs at the console.

The choice of repertoire for this special event was especially enticing, including Camille Saint-Saëns' thunderous "Organ Symphony" No. 3, George Frideric Handel's most familiar Organ Concerto, and a prodigious Bach encore from Jacobs that decisively upstaged Felix Mendelssohn's "Reformation" Symphony No. 5. With the remnants of Hurricane Ian keeping many subscribers away from the opening night performance on Friday night, the Saturday sequel filled the hall – down below and up in the stately balcony – to the bursting point.

For all of us who have felt a pang of frustration each time we gazed upon the vestigial organ pipes at Belk Theater, keenest when the Saint-Saëns Symphony was presented there with a piddling electronic substitute, this concert provided rich consolations. There were also redemptive aspects to this special program, for both CSO subscribers and the orchestra's musicians, since the last time that the "Organ Symphony" was programmed at Belk Theater on March 20, 2020, it was one of the first musical cancellations of the COVID pandemic. All of those rehearsals were not in vain after all.

My own enthusiasm for organ recordings goes back to the vinyl days of Daniel Chorzempa's performances of the complete concertos and Peter Hurford's renowned compilation of Bach's organ works, later reissued as a 17-CD doorstop. Recordings of the "Organ Symphony," on the other hand, were always earmarked in audiophile reviews as demo treasures that could prove the mettle of cream-of-the-crop loudspeakers far beyond my budget. With the advent of the Charlotte Bach Festival four years ago, we've been able to hear live performances of the Bach solos by topnotch organists, a rare enough blessing. But I'd never hoped to hear a live rendition of a Handel Organ Concerto, even on a portable at the Belk.

If your concept of classical organ has been shaped by Bach, who inspired countless grandiose organ compositions by notables of every generation since – and the ginormous instruments around the world built to play them – then the sunny, playful sound of Handel's concerti could take you aback. Of course, the nickname of Concerto No. 13, "The Cuckoo & the Nightingale," would have provided a broad hint if you picked up a program entering the sanctuary. Although marked Larghetto, there was nothing solemn about the opening movement, which began with Jacobs parroting the orchestral intro. The true merriment of the piece became evident in the ensuing Allegro, where cuckoo-clock sounds proliferated. As Jacobs took greater command, he played a little duet with himself, those plodding cuckoo sounds facing off with some nightingale filigree in the treble.

The middle movement was marked Organo ad libitum in our programs, in contrast with the Chorzempa version, where the "ad libs" were split into two tracks explicitly adapted from two movements of a Handel violin sonata. In the penultimate movement, another Larghetto, Jacobs finally gave us a hushed foretaste of the grander churchly sounds he would offer up in his Bach encore. Nearly as virtuosic as his crowd-pleasing cuckoo-nightingale counterpoint, the closing Allegro was the most jocund and celebratory movement of this concerto – and arguably the best incentive for seeking out the other 15 on recordings. Adding to the pleasure, the silky violins were as cheery as the organ, and Jacobs crowned this confection by soloing with his feet on the Möller's pedals.

There's little shame in not identifying a Bach organ work when it's played – unless it's the famed Toccata and Fugue in D minor with its instantly recognizable opening and Gothic drama. Not knowing the precise title, key, and BWV catalog number certainly didn't deter the First United audience from showering worshipful admiration on Jacobs' dazzling performance (for the record, it was Bach's A minor Fugue, BWV 543). The roar from the crowd in their protracted standing ovation was nearly as stunning as the performance. You couldn't question this massive communal judgment when Jacobs had given life to the idea of "pulling out all the stops," but we could wonder whether anything afterwards would measure up.

Reduced in number for the church's oratory platform and hampered by an acoustic environment less friendly to visiting orchestras than to the house organ, Charlotte Symphony gave Mendelssohn's "Reformation" the old college try for their former maestro. There was an unmistakable contrast in the opening movement between the sublimity of the Andante introduction and the turbulence that follows in the dominant Allegro con fuoco section. Mendelssohn's middle movements retained their engaging contrast as well, though the sanctuary's sonics stole a bit of their sparkle. It helped that the Allegro vivace presented the work's most familiar melody and that the CSO played the penultimate Andante so tenderly. Most impactful, however, was how Warren-Green shaped the closing Chorale with its joyous sunny components, the woodland purity of the Andante con moto, and the conquering march of the Allegro vivace. Brassy, stately, and triumphant, the "Reformation" ended grandly with the stamp of Rose Lipham's timpani.

While the Charlotte Symphony's performance of the Mendelssohn did not match the éclat of Jacobs' exploits with the Bach, the verve of their assault on the Chorale boded well for the Saint-Saëns masterwork when Warren-Green and the organist returned after intermission. A few more musicians fortified the strings onstage during the break, but the full thunder of the "Organ Symphony" isn't unleashed until the Maestoso section midway through the second (and final) movement, a sudden onslaught that must have snapped more than a few heads back. At last, this was the prime reason why it was worth hearing this massive work live with the might of a true church organ, an unforgettable experience. But that sforzando can be simulated in your living room easily enough if you wish to startle yourself without the more unique experience of feeling a whole sanctuary, with a congregation of over a thousand, trembling to its foundations. What most loudspeakers cannot deliver at home came earlier in the piece, when the opening movement Allegro moderato gave way to an almost serene Poco adagio.

Here, Jacobs and the Möller organ produced a more primal subterranean sound, eerie and uncanny in its force, an octave or more below what most loudspeakers can audibly reproduce with anything approaching this power. Sitting in the second row, I felt like a monster whale or a legendary Leviathan was about to surface from directly below me. Warren-Green and his orchestra were in top form in the first halves of Saint-Saëns' two movements, particularly appealing in the ominous Allegro moderato that opens the second movement, surely the most familiar melody in this score. Most thrilling was when the orchestra vied in sheer volume with the pipe organ and CSO's new conductor laureate sleekly accelerated the tempo into the rousing Allegro finish. Coming at the end of an evening suffused with music from the "king of instruments," these moments had all the grandeur of a coronation.