Braving the Baroque with "Wild Giants" 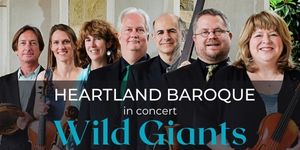 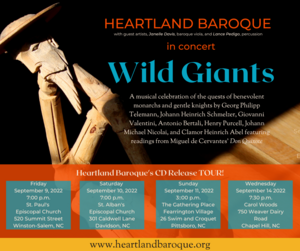 Heartland Baroque's newest program, "Wild Giants," toured across NC in four parts this September, serving both to provide loving chamber recitals and to share the release of its debut album, The Benevolent Monarch. The performances reached churches and local communities in Winston-Salem, Davidson, Pittsboro, and Chapel Hill, and featured (almost) equal parts album selections and other works, all of which unified to flank selections from Miguel de Cervantes' Don Quixote. Some selections were literal representations of the story, such as Telemann's Overture-Suite, TWV 55: G10, "Burlesque de Quixotte" and Henry Purcell and John Eccles' Incidental Music for the Three Don Quixote Plays of Thomas Durfey, Z. 578. Other works by Giovanni Valentini and Clamor Heinrich Abel (who were both new composers to me, despite their respective birthdates of 1582 and 1634), served more to contextualize the program and the classic story. Don Quixote was originally published in two parts in 1605 and 1615, and remains one of the most widely read works in Western literature.

Heartland Baroque's performance on Sunday, September 11, was a fantastic presentation of Baroque music in a refreshingly light and relatable setting. Violinist Martie Perry gave readings from the original text in short bursts throughout the program, outlining some of the broad strokes of the story but without losing its charm or humor. Her joy in presenting and performing was – almost infectious! – throughout the concert, in both her playing and reading. The core members of this ensemble are clearly well-trained in early music, but also comfortable and familiar enough with each other as players that their group balance, resonance, and flexibility were never in question. Perry and David Wilson's Baroque violin playing were light and clear, trading off for solo moments that were alternately energetic and jaunty or free and plaintive.

C. Keith Collins's dulcian (a Baroque-era ancestor of the bassoon) and Barbara Krumdieck's Baroque cello playing were rich and tender in the lower registers, notably in their performance in Johann Michael Nicolai's Sonata á 2: Violino é Fagotto. They were each able, throughout different works on the program, to provide stable, chordal outlines, but also deft and light harmonic motives as well. Collins even performed on a very impressive bass dulcian, humorously taking the opportunity to "sneak" the instrument into the performance area during Perry's reading - appropriately during the part about Quixote's "giants" (windmills).

The especially showy Sonata á due violini con Basso continuo from Antonio Bertali was an excellent representation of the low strings' synchronicity in the three-part basso, during which they were joined by William Simms' delicate yet resonant theorbo (which is a Baroque-era stringed instrument, in effect a bass lute). Simms provided a beautiful, darkly resonant sound in his theorbo playing throughout, but occasionally switched to the baroque guitar, a soft, mellow version of its modern counterpart.

While Heartland Baroque has ties to North Carolina, its members are from Indiana, California, and Maryland, and have performed in many different settings together, most recently a residency at the Avaloch Farm Music Institute, and the 2018 North Carolina H.I.P. Music Festival. However, local guest artists on this particular tour were essential parts of the program. Janelle Davis on Baroque viola added an extra layer of complexity and warmth to string features, especially prominent and impressive in her repeating flourishes in a rousing march section of Telemann's Suite. Lance Pedigo's battery of unique Baroque percussion instruments added an extra patina of authenticity, with joyful, rustic tambourine, castanets, and robust fanfares on drums of different sizes. There was even the lovely novelty of a wind machine during the Telemann suite, giving another loving nod to the iconic windmills of the story.

The storytelling style of program seems to work well for this ensemble, as seen in its previous program, "The Winged Lion and The Unremembered Sea," which was comprised of music by 17th-Century Venetian composers, and the words of Mark Twain from Innocents Abroad, which was inspired by his 1867 Venetian excursion. Presenting programs in this way allows for full immersion in the era, with clear, descriptive pictures that evoke relatable feelings and breathe new life into early music. I found it easier to engage with Wild Giants than other early music programs, having been provided some images, a style of language, and some similar musical works that I could then compare and contrast. While historically-informed performances are essential to preserving early music styles and traditions, Heartland's storytelling programs go the extra mile by injecting fun and engaging context among the works.