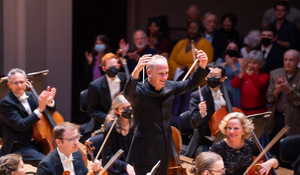 The North Carolina Symphony launched its opening weekend of the 2022-2023 season with new music director designate Carlos Miguel Prieto Thursday night in Chapel Hill's Memorial Hall and Friday in its home venue at Meymandi Concert Hall. The program, titled "Pictures at an Exhibition," featured Spanish-inspired works to honor Prieto's Spanish and Mexican heritage, and served to showcase a huge battery of percussion instruments and a very deep bench of talented players. Prieto brought a breath of fresh air to this orchestra, performing with an infectious joyful enthusiasm that brought the audience to their feet even before the final notes stopped ringing.

First up was Jennifer Higdon's "Fanfare Ritmico," an optimistic prediction of things to come in the 21st century (the work having premiered in 2000). Higdon, until last year professor of composition at the Curtis Institute, uses this work to celebrate the "speed of modern life." The piece is reminiscent of the frenetic "Short Ride in a Fast Machine," but with layered complexity and ethereal, sometimes pointillistic treatment of its motives. The orchestra delivered smooth and dramatic swells of volume, intricate brass and wind lines, and intense, infectious rhythm from a very active percussion section (it's always a good day when you get to hear a vibraslap at a NC Symphony concert)!

Debussy's Ibéria from Images, L.122, was up next, three movements of extraordinarily coordinated nuance. Prieto led the many excursions through varying time signatures clearly – I felt I could follow them easily even from my seat in the lower balcony. The performance yielded ephemeral violin and viola lines, rich low flute and clarinet ostinatos, a distant muted trumpet, and vibrant low strings.

Ravel's Rapsodie Espagnole, Op. 35, followed, a similarly romantic homage to the Iberian Peninsula, though with perhaps more suspenseful and sinuous moments throughout. Both works nodded towards the rich dance culture present in Spain and the surrounding areas, aided by the ubiquitous energy of tambourine and castanets. Prieto clearly possesses an ability to draw out hugely varied tone colors and styles from the orchestra, which also speaks to the orchestra's versatility, expertise, and responsiveness. Both works received an incredible reception by the audience (which appeared to be very nearly a full house!), with audible whoops and bravos after each set.

The headline work of the program, Mussorgsky's Pictures at an Exhibition, Op. 35, was of course orchestrated by Maurice Ravel, and the significance of the pairing of this with Rapsodie before intermission was not lost. Ravel's skillful instrumentation clearly brings a huge depth of sound to the work that serves to draw out what I can only describe as a sweeping, cinematic set of evocative melodies and motives that have become longstanding favorites in the classical genre. This is where the NC Symphony got a chance to demonstrate just how exquisitely talented its members, subs, and additional personnel all are; sectional features, solos, and interesting combinations abound throughout the work, and the orchestra did a phenomenal job as a whole unit as well as in its composite parts to create a glorious experience from start to finish.

After an extended standing ovation, Prieto returned to lead the ensemble in an encore performance of Manuel de Falla's Danza Española No. 1, "La Vida Breve," which was expressive and rollicking through to the end. I cannot stress enough how satisfying it is to watch an ensemble this physically embodied (yet seemingly relaxed and comfortable) in its performance! The NC Symphony continues to revitalize classic works, giving them new verve and enthusiasm while faithfully honoring their legacy – as well as peppering in new works and re-contextualizing older ones, which I hope we will continue to see more of in the future.