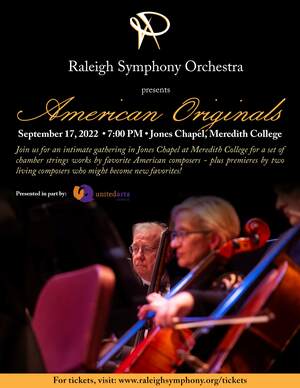 This preview has been provided by the Raleigh Symphony Orchestra.*

The Raleigh Symphony Orchestra kicks off its 2022-2023 season with American Originals on Saturday, September 17th at 7:00pm. Departing from its usual performance venue, a chamber strings iteration of the orchestra will appear in Meredith College's Jones Chapel for a smaller and more intimate orchestral experience.

Highlights of the program include premieres of two living American composers, the RSO's own bassoonist John Caldwell, and RSO pianist (and CVNC contributor) Chelsea Waddelow.

Eric Whitacre: A Boy and a Girl

John Caldwell recently completed his Ph.D. in Musicology at the University of North Carolina at Chapel Hill. His dissertation, “Songs from the Other Side: Listening to Pakistani Voices in India” was completed under the direction of Dr. Michael Figueroa. John's research interests include the music, film and media cultures of South and Southeast Asia, comparative musicology and music analysis, second language learning, and poetry and poetics. He directs the UNC Nyai Saraswati Gamelan Ensemble and plays principal bassoon in the Raleigh and Durham Symphonies. John is fluent in Hindi-Urdu and teaches both languages at the University of North Carolina as well as courses on South and Southeast Asian music.  John has co-directed the annual UNC Summer in India Study Abroad Program since 1999. He is a composer as well as a published poet in English and Hindi-Urdu.

On his new composition, John says, "I composed this three-movement symphony in 2020-2021. Each movement conveys different emotions that I felt during the pandemic including frustration, grief, and hope. In addition to these currents of emotion, I wanted to explore how music itself, with its expressive and compositional textures, helped me deal with not being able to play in groups or perform for the public. The String Symphony is meant to be whimsical, quirky, and fun to play as well as to hear. My motto at the time I was composing it was adapted from Oscar Wilde: 'Music is much too important to be taken seriously.'" While the work is, indeed, quirky at times, it is complex and layered, just like the emotions it seeks to express.

Chelsea Waddelow is a board-certified music therapist with a Master's in Music Therapy from Appalachian State University. Chelsea trained with Dr. Kent Lyman at Meredith College for her undergraduate degree in piano performance and with Dr. Tony Vaglio for her undergraduate degree in composition.  In addition to maintaining her music therapy private practice, teaching as an adjunct professor at Meredith College, and serving as church organist and choir director at Holy Trinity Greek Orthodox Church, Chelsea maintains an active performing career and has played in NC, OK, TX, AR, and abroad.

A flexible artist who enjoys exploring many different styles and instruments, Chelsea performs with the Raleigh Symphony Orchestra, the Oklahoma Haydn Festival Orchestra, White Iris Light Opera, and Meredith Ensemble Theater. She is a founding member of The Hillsborough Street Jazz Trio, a cherished project that allows Chelsea to co-create arrangements for the group with her husband, RSO Music Director Dr. Jim Waddelow; engage in multiple different styles of improvisation; and to play a whole new world of repertoire. Its next performance is less than a week after RSO's opening night: "Cole Porter with Friends" will take place at Meredith's Carswell Hall on September 22, at 7pm.

Chelsea will peform on the RSO premiere of her new composition, "Introspection for Rhodes and Strings," written to highlight the unique Rhodes piano (which has an absolutely fascinating history). "Both Jim and I thought that the peculiar, crystalline timbre of the Rhodes might make a delightful pairing with the warm sound of a small string ensemble," she says. "I also wanted to write for this particular instrument for two reasons: I own a vintage 1977 model paired with a 1980 Roland JC 120 amplifier, and am always looking for opportunities to play on it. Second, I think it's a gorgeous instrument that, while featured frequently by pop and jazz artists, has been underutilized in a classical context." In regards to the composition, she says that "it sounds a bit like Mancini meets Ron Carter with a bit of Chick Corea thrown in...in other words, like chocolate on a rainy day."