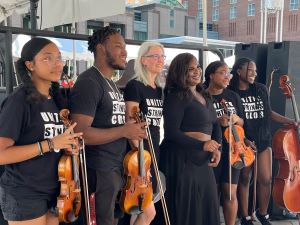 The African American Cultural Festival of Raleigh and Wake County took place over the Labor Day weekend after a two-year hiatus, and what a cultural celebration it was! Vendors lined Fayetteville Street selling beautiful art, clothing, food, jewelry, and more. Triangle participants were more than happy to come out and support local Black businesses and artists on this very hot, 94-degree Sunday afternoon.

I found the tented concert stage by following the soulful voices of the recently-formed Deep River Singers as they began their set of African American Spirituals. Under the direction of Paul Anderson II, this excellent group of well-blended voices "strives for excellence and education while spreading the message of the Spirituals." Anderson is a scholar on the art form – it really shows in the depth and first-rate work of the ensemble. Check out their podcast and don't miss an opportunity to hear this group if you get the chance!

The spirited dancing of the South Garner Titan Dance Directive followed. These young women from various dance classes at South Garner High were a delight to watch. Kudos to their teacher, Jasmine B. Knight and the arts leadership at South Garner!

The United Strings of Color was formed by Margaret Partridge in 2018 as a project to address racial disparity in classical music through music education and community engagement. USC is comprised of a quartet of outstanding young string musicians of color who select and play music that represents both historic Black classical composers as well as contemporary music by prominent living composers of the African diaspora.

Violinist Felicia Adizue is a founding member of United Strings of Color. As a member of Kidznotes, she has participated twice in the Youth Orchestra of Los Angeles Summer Festival under the direction of Gustavo Dudamel.

Violinist CT Thomas is in her fourth season as a member of United Strings of Color. She is a senior at Wake Forest High and also a member of the Triangle Youth Symphony.

Violist Sterling Elliott is in his third season with USC. For the past two years he has won the local Talent Hunt of Omega Psi Phi. He is a freshman at North Carolina Central University and was awarded a Cheatham White Scholarship. He recently auditioned and was accepted into the Durham Symphony.

Cellist Lexi Etienne is a founding member of United Strings of Color. She is a junior at the North Carolina School of Math and Science and a section leader in the Duke Youth Symphony.

This afternoon's varied programming included venerable African American composers Florence Price and William Grant Still. However, the quartet caught the ears of those listening by beginning with Black Violin's "Shaker." Another contemporary arrangement of Andra Day's "Rise Up!" featuring soprano Tahmiyah Kelly was a crowd pleaser. Kelly's facile voice and excellent control of her incredible range was very impressive.

The USC quartet showed off their fine ensemble and intonation with "Race" by Daniel Bernard Roumain (DBR) and Sam Cooke's "A Change is Gonna Come." Members of USC introduced each piece with some fascinating historical facts, which prompted one gentleman behind me not familiar with Price or Still to Google them on his phone!

USC ended their set by bringing Kelly back to the stage, who read from Sing A Song: How Lift Every Voice and Sing Inspired Generations, by award-winning author Kelly Starling Lyons. The audience then joined in by standing and singing the Black National Anthem together with the ensemble accompanying: a very fitting ending to a fine set.

The string arrangement of Price's "Adoration" was reverent and profoundly moving. Still's poignantly beautiful "Summerland" was this listener's favorite piece of the afternoon set. The quartet moved with unbelievable ease and maturity when expressing the different styles in such a varied program. While the group/stage was well amplified, more intimate pieces by Still and Price could not be fully appreciated in an outdoor setting – I hope that we will have an opportunity to hear USC play these selections in an enclosed space very soon. It was clear that they would not disappoint!

This season, NC State Live and Raleigh Civic Symphony have a commissioned work by DBR that will include community youth and USC. Elmer Gibson is also working on a new piece based in African American history for the group. We look forward to hearing more performances by this outstanding group of young musicians this year. Keep an eye on this page to find out more.