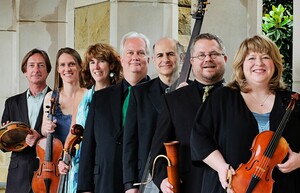 This preview has been provided by Heartland Baroque.

We spend our days looking for stories. Whether choosing a vivid beach read, gathering around the campfire (looking for symbiosis around the water cooler!), or queuing up the next Netflix series we are going to binge-watch, humans have an insatiable and evolutionary appetite for the magic of wondrous stories. The best of these stories don’t even always have the flashiest titles or plotlines; they linger masterfully, and they astonish us by deepening our humanity. Heartland Baroque (along with guest artists, Janelle Davis, baroque viola, and Lance Pedigo, percussion) is thrilled to present “Wild Giants,” a program honoring the story of a hero’s journey through music and text. Miquel de Cervantes’ Don Quixote, one of the great novels in Western literature, is a pivotal work, telling the classic tale of a knight, his squire, and their quests in the name of chivalry. This fable is curiously modern, giving voice to an array of brilliant characters and their divergent experiences with dignity and compassion, and offering a nuanced critique of the realities of 17th-Century Spain and Imperialism. Many composers throughout history have been inspired to tell the story of this literary masterpiece through music, and this concert features Georg Phillip Telemann’s sonic tribute, "Burlesque de Quixotte."

The other composers in this concert represent the lexicon of the strongest artists under Austrian Habsburg rule in the early Baroque period. Heartland Baroque is thrilled to commemorate this dynasty of musicians with works that enhance the depiction of those who take up the sword to defend the helpless. Musicians such as Johann Heinrich Schmelzer, Antonio Bertali, Giovanni Valentini, and their contemporaries will be featured, with works for violins, viola, cello, theorbo and baroque guitar, dulcian, and percussion. Music from Heartland Baroque’s debut CD The Benevolent Monarch, released in June 2022, will be included, and copies will be available for purchase at the concert.

Bound by a passion for playing instrumental music of the 17th and 18th-Centuries, Heartland Baroque is an ensemble made up of respected early music specialists from all over the United States. Its members Martie Perry and David Wilson, baroque violins, Keith Collins, dulcian, Barbara Krumdieck, baroque cello, and Billy Simms, theorbo and baroque guitar, hail from North Carolina, Indiana, California, and Maryland, and often perform together in other well-known historically-informed period instrument ensembles around the country. Heartland Baroque dives into the Baroque musical world with vigor, showing off the immediacy and technical brilliance, the vivacity and profundity, the lilt, complexity, and spontaneity of its composers.

Their recent experimentation with story-based concerts began with a project last season, featuring music by Venetian composers framed by writings by Mark Twain during his late-1800's explorations of the city. These programs give the music another form of historical context that makes them easier to conceptualize. "Wild Giants" likewise features works not only written literally about Don Quixote, but allusions to fencing and swordplay as well as defending the weak. The album release tour will make its way from Winston-Salem to Chapel Hill next week, making four total stops across the state (see sidebar for event details).

Despite hailing from across the country, Heartland Baroque is a longtime North Carolina favorite, with ties to the NC Baroque Orchestra, Raleigh Camerata, and nearby historical town of Colonial Williamsburg (VA). The ensemble performed one of the featured concerts in the 2018 North Carolina HIP Music Festival and most recently, the group was awarded a residency at the esteemed Avaloch Farm Music Institute in New Hampshire. Heartland Baroque was featured on the Mallarmé Chamber Players concert series in May of 2022, and has also performed several concert tours in North Carolina. The group has presented fringe concerts at the Boston and Berkeley Early Music Festivals as well for the Early Music Festival for Grace in California.