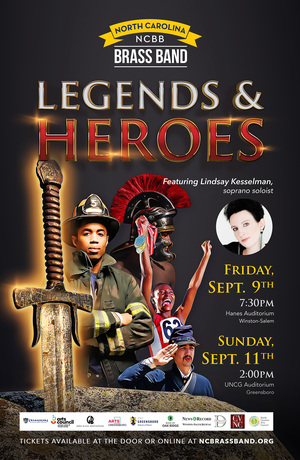 This preview has been provided by the North Carolina Brass Band.

The North Carolina Brass Band 2022-23 concert season begins in September with Legends & Heroes! The NCBB celebrates legendary and heroic figures throughout history with inspiring music written by legendary composers. Featured soloist is NCBB soprano, Lindsay Kesselman! You don't want to miss what promises to be a memorable performance! The program consists of works to channel both literal and metaphorical heroes, from Spartacus and the fallen soldiers at Gettysburg, to fictional epic landscapes, to the quiet strength of the everyday hero. There are two chances to listen, as the program will be presented in both Winston-Salem and Greensboro.

This season Lindsay Kesselman will have the honor of being the featured singer at John Corigliano’s 80th birthday concert celebration at National Sawdust. Other season highlights include her debuts with the North Carolina Symphony and the Charlotte Symphony Orchestra, as well as the 2017 release of Antique Violences on Blue Griffin, featuring Songs from the End of the World by John Mackey, written for Kesselman and chamber winds. Her performance on this recording was praised in Fanfare Magazine: “...Kesselman sings the uncommonly beautiful songs with heart- breaking restraint....” Kesselman holds degrees in voice performance from Rice University and Michigan State University. More information can be found at: www.lindsaykesselman.com.