Music of Hope for Ukraine 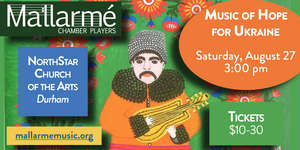 This preview has been provided by Mallarme Chamber Players.

Music of Hope for Ukraine, taking place on Saturday, August 27, is a performance of chamber music by Ukrainian composers to bring awareness to the plight of Ukrainian artists and support for refugees considering the Russian invasion of Ukraine. Mallarmé is partnering with Church World Service of Durham to encourage donations towards Ukrainian refugee resettlement in the Triangle. For more info visit https://cwsdurham.org/about-us/

By the late 1940’s, Sergey Prokofiev was in poor health. In addition to circulatory problems and some minor strokes, he suffered a concussion from a fall off a podium that left him with chronic headaches and dizziness. The brutal dicta of the cultural commissar Andrey Zhdanov, stipulating that only cheerful, uplifting and folksy art were to be allowed, condemned Prokofiev and others for “Formalism.” The accusation prevented performances and publication of much of their music, as well as instilling justifiable anxiety, even paranoia. He was in financial straits, and continued to compose frantically, especially on his Symphony No. 7, which he hoped would garner him the Stalin Prize with its big financial payoff. In 1952 he was working on seven different compositions at the same time, including the Sonata for solo cello. He planned a four-movement work, but he was running out of time. With the help of his friend, the cellist Mstislav Rostropovich, he wrote down parts of the first movement, Andante, but then stopped to work on other projects, especially the Symphony. He never returned to the Sonata, dying in March 1953. The fragment was left unfinished and unpublished until 1972, when composer and musicologist Vladimir Block finished the movement in a performable form.

The son of a mixed Ukrainian-Polish family, Borys Lyatoshynsky was mostly home-taught. His musical talent was evident early, his first composition surviving, a Mazurka from 1910. At the behest of his father, he entered the Kyiv University to study law, but became at the same time a composition student of Reinhold Glière and decided to become a composer. In 1922 he started teaching
composition at the Kyiv Conservatory. Lyatoshynsky's music was a mixture of mid-century modernism with Ukrainian folk music. It got him into frequent trouble with the Soviet cultural commissars, refusing to adhere to the policy of cultural realism. But he spent the grim war years as an evacuee in Saratov, on the Volga, teaching at a branch of the Moscow Conservatory. He spent the time arranging Ukrainian folk songs which were widely broadcast, all in the name of patriotism. The 5-movement String Quartet No. 4 dating from 1943, is virtually a suite of folk melodies. The grim mood of the times is reflected in the lento first movement, as well as the andante fourth. But with the end of the war, promoting Ukrainian folk culture became a taboo. In 1948 Lyatoshynsky got into trouble with his Symphony No. 2, the commissars stating that “The anti-national formalist trend in Ukrainian musical art was manifested primarily in the works of composer B. Lyatoshynsky. This is a disharmonious work, cluttered with unjustified thunderous sounds of the orchestra, which depress the listener, and in terms of melody – the symphony is poor and colorless." Ironically, he was in good company, with Shostakovich, Prokofiev, Myaskovsky, Kabalevsky and many lesser names.

Excerpts from Music in the Old Style Valentyn Silvestrov: Three Bagatelles, Op. 1 (b.1937)

Valentin Silvestrov belongs to a generation of composers that straddles the cultural gap between the aesthetic strictures of the former Soviet Union and the cultural individualism and eclecticism that has reigned since its collapse and the resurgence of national identities. Ironically, his works regularly appear on the list of Grammy nominees. Born in Kyiv, Silvestrov studied at the Kyiv Conservatory, where his music was regarded as avant-garde, bringing him into conflict with the Soviet authorities, who in 1974 expelled him from the USSR Composer’s Union. In response he dropped out of public eye rather than renounce his modernist
style. Silvestrov is a prolific composer in all genres except opera, including nine symphonies. His music is difficult to classify. While his early Soviet era compositions were criticized for being too modern, atonal and serialist, he has subsequently espoused a kind of neo-romanticism – although often with sarcastic overtones, as in his Kitsch Music for Piano (1977). He has, in a sense, adopted the ancient concept of the inspired artist, who serves only as the medium for expressing the voice of the muse. "I do not write new music. My music is a response to and an echo of what already exists," Silvestrov has said. His A Metaphor for Schubert and Chopin sounds as if it must have been written by a nineteenth-century composer, for whose voice Silvestrov only serves as a conduit. The very notion that the music appears to have been written by someone else was the composer’s desired effect. The result is a kind
of eclectic but emotionally accessible musical communication that is both new and retrospective. For several years he has concentrated primarily on short piano pieces, entering what he calls his “Bagatelle decade.” The Three Bagatelles, Op. 1, date from 2004. They are dreamy and ephemeral. So is the Music in the Old Style, dating from 1973. In February 2022, Silvestrov fled Ukraine and currently lives in Berlin.

Ukrainian composer and teacher Myroslav Skoryk was born in Lviv (Then part of Poland), and in 1945 entered the Lviv Music School. But in 1947 his whole family was deported to Siberia and they did not return to Lviv until 1955. After graduating from the Lviv Conservatory, Skoryk studied composition for four years at the Moscow Conservatory with Dmitry Kabalevsky, during that time composing extensively in most musical forms. He became a teacher first at the Lviv and then at the Kyiv conservatories. In 1996 he
emigrated to Australia, but eventually returned to Ukraine and became artistic director of the Kyiv Opera. Skoryk composed the deeply touching Melody in 1982, originally for piano, but it has been arranged for many instruments and instrument combinations, including symphony orchestra. The work has become so popular in Ukraine that most people think it is native folk music rather than a modern
composition. It is often referred to as Ukraine's spiritual anthem. The theme comes from music for the war-time drama Highland Pass that Skoryk composed in 1978.

The son of a German father and Polish mother, Reinhold Glière was born in Kyiv. He taught for some years at the Kyiv Conservatory, before moving to the Moscow Conservatory, where he taught intermittently for over 20 years. If sheer survival is the criterion for success, Glière's career is a success story without parallel. Whatever history' final judgment on the merits of his art, he earned a place in music's Hall of Fame for one unique achievement: He managed to please Tsar and Commissar equally and without interruption for more than half a century. The only other composer who comes to mind is Haydn, who went from being the most important composer of the Austro-Hungarian aristocracy to being the darling of London's merchants without offending either. Glière's music represents a classic example of cultural persistence. His late-Romantic style, with elements of Borodin, Tchaikovsky and Rachmaninov, exemplifies the establishment before 1917, so hated by the Bolsheviks. But the Ten Days that Shook the World did not shake his musical style at all. Somehow, nobody, not even Stalin, ever took offense with him or his music. His Soviet cultural awards were a legion. Most of Glière's music is painted with a broad, bold brush. Even his chamber music aims for the big sound, and the Sextet No. 3, composed in 1905, is melodious and energetic. It shows the influence of the folk music Gliére collected in the Russian domains of Asia.

The Mallarmé Chamber Players are an ensemble of professional musicians based in Durham, North Carolina since 1984, whose mission is to enrich the lives of their community through outstanding chamber music. The ensemble distinguishes itself by its innovative educational programs, its commitment to creative collaboration with other organizations, its creation of significant new work, and its dedication to serve a diverse population.