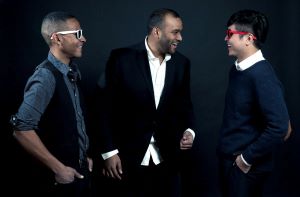 The Warp Trio, emcee Faybeo'n Mickens, and dancer Emily Haughton guided us through movements of social justice with their provocative, challenging, and rousing performance of Black Voices. Unafraid of confrontation, unbothered by opposition, and unwilling to compromise the truth, the group's message was elegiac, prophetic, and a call-to-action. As part of Music Carolina's SummerFest, Warp Trio was able to reach an audience outside of their typical population of listeners with their critical message. In a collage-like performance, the group built on the words of Maya Angelou and Dr. King, recontextualized the timeless works of Bach's cello suite and Goldberg Variations, and played with a range of musical genre's to craft the narrative of Black Voices.

Combining classical skills from the Julliard school with backgrounds in jazz and rock music, the four-person Warp Trio is known for their electrifying public performances. By taking advantage of the flexibility of their chamber music instrumentation and collaborating with countless other artists, the Warp Trio has shown to be an imaginative, inventive, and inimitable ensemble. One of the featured collaborators on this concert was rapper and spoken word artist Likwuid. An eminence of the industry herself, Likwuid (Faybeo'n Mickens) has worked with Warp Trio before on projects like their single "Nature Boi," "Welcome to the Pandemic Disco"; she also made an appearance on their 2018 album Circadian Vibes.

After a sampled recording of "Still I Rise" recited by Angelou herself, Likwuid took control of the poetic cadence with "Herstory," a dissemination of the social, emotional, and political experiences of Black women. After the words of Angelou and Mickens, the narrative broadened from the power of individualism to the power of a movement. Emboldened by the sampled words of M.L.K.'s I Have a Dream, an impassioned solo from cellist Ju Young Lee gripped the audience. Expanding on the words of King, Likwuid again took charge of the cadence as she exposed and denounced the contradictions of equality in America. Addressing the empty promises of the Constitution, she likened the confirmation of the rights to life, liberty, and pursuit of happiness to a promissory note that has bounced as a bad check. She insisted that "there are insufficient funds in the land of checks and balances" and that it's time to collect on overdraft fees. Along with the voice of emcee, the ensemble delivered a performance that was an anti-capitalist revolution for the humanists.

Likwuid recalled the ancestry of the land and its people through the water of the rivers Congo, Nile, and Mississippi, while guest dancer Emily Haughton invited our eyes to her position in the center of the ensemble. Based in New York, Haughton has an extensive freelance career which includes previous collaborations with Warp Trio as well. Haughton's movement vocabulary is unlike any dancer or dance style I've ever seen. She was graceful and fluid, but throughout her performance, it looked as though Haughton was fighting through invisible limitations. Especially as the music intensified emotions of grief and anxiety, Haughton's movements became jerky, reactionary, and cautious. In "Lamentations" by Coleridge-Taylor Perkinson, Lee engulfed the audience with a rattling and grating cello solo as percussionist Rick Martinez pushed Haughton's momentum faster and faster until she collapsed in a Stravinsky-esque sacrifice. It was only the live-processed melody from violinist Josh Henderson that was able to resuscitate Haughton – although it became clear that her character had been forever altered by the traumatic event. Musically and visually sensitive to the dynamic effect of the performance, the Warp trio and Haughton reminded us of the show's integral themes of communication and change.

Book-ending the show's opening theme of personal resilience, a gospel-inspired and rhythmically unrestricted interpretation of "Lift Every Voice" left the audience with a final feeling of optimism and strength. Pianist Mikael Darmanie and cellist Lee conversationally exchanged iterations of the melody, giving the impression of camaraderie and unity. In command of our attention once more, Likwuid reassured us of the importance of activism and the importance of the good fight. Reverent for the movement of defiance, she insisted, "weary our feet, but we march on!"

Beyond their excellent artistry, Warp Trio has an important message to bring to audiences. With so much of an emphasis on narrative power, I think the group could find strength in developing larger, cohesive works. Given the audience's understanding of classical music conventions, the signaling of the ensemble's transitions was sometimes unclear and let the pressure on the audience deflate. Without transitions slowing down the group's momentum, I think their work could leave an even bigger impact on audiences. Black Voices was a relevant and inspiring performance that more audiences deserve to bear witness to, and I hope Warp Trio breathes life into the show again.