AAPG & Matthews Playhouse Premiere A House Is Not a Home 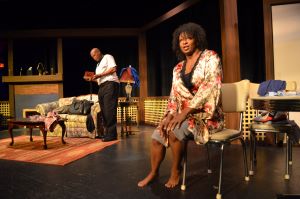 Matthews Playhouse is still going strong with its annual African American Playwrights Festival, a collaboration between The Matthews Playhouse and the African American Playwrights Group (AAPG) for which BIPOC playwrights are encouraged to submit their works to a panel of judges for selection. The play selected then goes on to be fully produced with cast and crew. This year's winning production, A House Is Not a Home, was written by Kenyatt M. Godbolt, whose work was selected and rocked the house opening night!

Set in New York City in the 1990s, A House Is Not a Home explores the dynamics between father and son, hip-hop culture, and the consequences of divorce. As a New York City corrections officer, David is struggling to accept his role in the destruction of his family and marriage. Things take a turn for the worse when David invites a female friend to live with him and his 20-year-old son.

According to the U.S. Census Bureau, the divorce rate is higher among Blacks than other Americans. In the 1990s, the divorce ratio was 28.2 divorces per 100 marriages among Blacks, compared to 13 per 100 marriages for Whites (U.S. Census Bureau, 1991). Godbolt says, “This fact of life for Blacks in America causes many of us to remain single and/or become single parents. It causes many of our children to struggle at school…It causes too many of our children to engage in criminal activity. This play helps parents who struggle with forgiveness, and this play helps young people understand the importance of family, education and making good choices.”

Trailblazing is not easy. Godbolt has developed a piece that clearly explains, represents, and magnifies the significance of exposing the histories, teachings, and generational gaps necessary to impart togetherness and potentially catalyze bonds of unity. From the very beginning of the show, as I stared at the carefully dressed stage, I realized that this performance would be nothing less than substantial. African artwork and sculptures hung carefully; clay and wicker plant pots designed for a homey decor and clothes spread about the living room established the ambiance that screamed chaos. Somehow, though, even while viewing this, I fully expected the chaos to be resolved at the show's conclusion. The brown set is separated by wooden slabs hung vertically to texturize the living area and provide depth.

Opening the house with live music felt really grounding. Singer Dupresha L. Townsend and pianist Lenora Helm welcomed the house with the warming sensation of jazz music. I listened with a close ear as Townsend sang the lyrics “finally found the one that I love.” Her effortless groove had me on my toes and I couldn't resist swinging my hips and swaying my head as I listened zealously at her delicate, serene voice. She sang a number of songs, including the Gershwin's "Summertime" and "A House Is Not a Home" by Luther Vandross. Her breath control was a gift and made the entire set up for Godbolt's production even more rich and filling.

The play began and immediately noticeable was a sincere bond and well-built chemistry between the father and son characters. The rhythm and flow of their conversation accurately portrayed the generational gaps between the two. 22-year-old Jamal (Tyler G. Thompson) began by discussing his urges to join a rap group, and his father, David (Andre Minkins), expressed his concern for the idea. Emphasizing to Jamal that his studies should be his primary interest, David redirected his attention while making a point to address his fear of one day reading about Jamal’s name in the paper for something not so charming. Jamal saw this spotlight of attention from David as an opportunity to express a few of his own concerns regarding his father. He began by addressing his father's tendency to neglect monogamy. Jamal mentioned how he was not the only pencil in the box that needed sharpening. After discussing his plans with his girlfriend, Sabrina, Jamal introduced the appalling fact that he was aware of David’s intimate relationship with Sabrina’s mother! Embarrassed after hearing David's denial, Jamal decided against furthering the conversation and made way for the door. David began to create something of an apology but while doing so began to reminisce on the scene that caused the need for the apology in the first place. Mentioning Sabrina’s mother, Wendy, the stage lights turned a shade of blue and David walked centerstage to perform a myriad of movements, reenacting his reaction to seeing Wendy appear at his door wearing only a trench coat. David says, “She took that trench coat off and it was—” queueing the incoming soundtrack "Murder She Wrote" by Chaka Demus & Pliers.

I must say that transitions were quite creative, which was refreshing for a production with concepts as heavy as marriage, divorce, drugs, racial inequity, and so on.

The story goes on to develop past the fact that Jamal was internally battling the consequences of his mother and father's divorce. One day, David stated his anticipation of inviting a lady friend, Amber (Mishunda Mathis), into the home. Amber was quite the presence, and Mathis made that known. Amber and David developed a strong intimate relationship throughout the show, which caused a few more problems in their already chaotic situation.

Well, it wouldn't have been too bad if it weren't for Amber's current husband, Charlie, a drunken psycho with anger issues that frequently takes advantage of Amber mentally and physically.

Amber was seeking escape and she found it in the arms of David. It didn't take a magnifying glass to see that Jamal, however, had no interest in supporting the fragile mental or emotional needs of this woman who also just so happened to serve as the DA for one of his previous court cases.

Fast forward, David receives a phone call from Jamal’s college advisor who states that Jamal did not meet the requirements to graduate. Meanwhile, Amber has volunteered her assistance as a voice to consult with the advisor to get him back on track, but Jamal hastily refuses, insisting that he wants nothing to do with her. David doesn't take too well to this and suggests that if Jamal does not want the assistance, then maybe he should leave. It takes two minutes for Jamal to pack his things and leave with a trash bag filled with his belongings. Before exiting, David asks, “How are you running away from home at this age?” Jamal then turned toward Amber to respond, “Ain't that what people do at all ages?” The two exit. Intermission.

After intermission, Jamal has moved in with Sabrina and her mother only to find that both are pregnant, Sabrina by Jamal and Wendy by David. What a mess! Jamal returns home to David to break the news. Taken aback, David attempts to divert the attention and place his concerns on Jamal once more. The pressure is on, and Jamal feels the heat, but he makes it clear that he has everything under control, not to mention that he's moved up in the rankings for the rap group he’s managing and so has his conviction that he will prevail in this situation. David, however, still feels slighted and continues to express his uncertainty with Jamal’s approach toward handling his "business."

The tension continues to climb as David and Jamal's mother, Sheryl, decide to split the proceeds from selling their home. Quite creatively, during Act II, we see boxes spread sparingly throughout the house while pieces begin to slowly be removed from the set.

One night, Jamal comes into the house unannounced while Amber is there. Jamal’s behavior is frantic, and he rummages throughout the space anxiously. Amber catches Jamal with a "controlled substance" and demands that he answer her questions. Their conversation escalates and the play's entire dramatic saga culminates in an even more tragic end — but to know what that is, you'll have to check the show out yourself.

This new play is clear and to the point, making the climatic elements that much more engaging. Cohesive and well planned, each scene developed based on the vulnerability of the situation preceding it.

This strong, three-member cast used this play as a microphone to represent and accurately portray what it means to experience loneliness, abandonment, vices, lack of self-control, anger, resentment, fear, hesitation, manipulation, and doubt. Congratulations to the actors, Godbolt, and the AAPG on a great first performance. Matthews Playhouse made no mistakes in their selection. Do not miss this great opportunity to experience the joy of live theatre and realistic storytelling.

A House Is Not a Home continues through Sunday, August 28. For more details on this production, please view the sidebar.