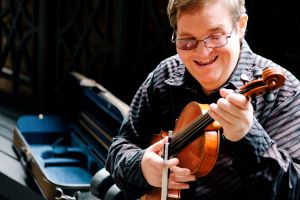 Doc Watson is a local legend around Boone, North Carolina; he was incredibly influential in the national popularization of Appalachian bluegrass and folk music throughout the 1950s up to now. The town of Boone honors him every year on August 19th with a day of music to celebrate his contributions.

This year, Michael Cleveland and Flamekeeper lit up the Doc Watson Stage at the Appalachian Theatre for Doc Watson Day. The music kicked off with a bang and little introductions. After the band had the audience hypnotized, Cleveland introduced himself and the band, then went right back to it with gusto. The band is comprised of Cleveland (Fiddle), Josh Richards (guitar), Chris Douglas (bass), Nathan Livers (mandolin), and Jasiah Shrode (banjo).

I was pleasantly surprised when the band started singing, after playing instrumental music for the first 30 minutes of the concert. Over the course of two hours, the band covered a wide range of songs, including some from their 2019 Grammy-awarded album Tall Fiddler, a few that Cleveland is known for, and a few unreleased tunes as well. The lighting during the performance was stunning and the color and brightness changed depending on the tempo or theme of the song. For instance, when they played a song about a desert, the stage blazed with warm colors and grew cold and blue during the blues tunes.

Cleveland played that fiddle so fast that you'd expect to see smoke coming from his fingertips. Since the majority of the songs were rapid, I was able to appreciate the slower songs even more. Cleveland is notorious for fiddlin' fast, so it only makes sense that he surrounds himself with those able to keep up.

Although everyone on stage had exceptional talent, Cleveland and Douglas stood out – they expressed all of their feelings with each pluck or draw of the bow. The audience was able to experience the musicians' emotions too, and it made the performance more enjoyable to watch knowing that everyone onstage was having so much fun.

Doc Watson was an incredibly talented musician, blind since the age of one, who is widely known for his flat-picking style of playing the guitar. Michael Cleveland is also a musician with blindness who was greatly inspired by the fiddle-like way Watson played. The two even played together in a bathroom once. Cleveland's performance showed great reverence to Watson, and it was truly an honor to have him and Flamekeeper come to Boone and perform on Doc Watson Day.

Cleveland is well accomplished and has been recognized twelve times as the International Bluegrass Music Association's (IBMA) "Fiddler of the Year"; in 2018, he was inducted into the National Fiddler Hall of Fame. In 2020, Michael Cleveland & Flamekeeper won a Grammy for Best Bluegrass Album of the Year for Tall Fiddler. This performance was a celebration filled with life and joy and it completely blew away my expectations for the evening. I would urge anyone unable to make it to check them out online. Michael Cleveland and Flamekeeper continue their tour across the states into the spring of 2023.