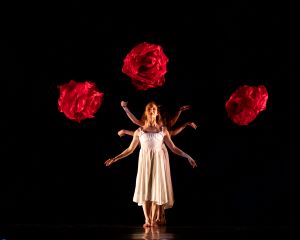 As the song says, "And if you go chasing rabbits, and you know you're going to fall," I say: if you go to see MOMIX, you're most likely going to have your mind blown.

The contemporary dance theater company has been challenging normal sense perceptions since 1980 when it spun off from its parent company, Pilobolus (founded in 1971). Both companies were co-founded by a Dartmouth College English major Moses Pendleton, who also choreographed the closing ceremonies for the Lake Placid (New York) Olympic games that same year.

The seven dancers, whom the program calls "dancer-illusionists," in MOMIX's latest full-length production, Alice, make you think that you are seeing a company of about 30. It's all done with visual projections, fabric, props, and the human body, and it is by turns baffling, dizzying, delightful, and yes, mind-blowing.

The performance on July 30 in Boone was just the second public performance of Alice. It ran at The Joyce Theater in New York City July 4-24 and goes next to Italy.

Lewis Carroll's Alice's Adventures in Wonderland and Through the Looking Glass have inspired volumes of collateral art works. Tom Waits co-wrote songs for a play by Paul Schmidt and subsequently released an album called Alice in 2002. Christopher Wheeldon did a ballet in 2011, and Gerald Barry did a one-act opera in 2016.

The nonsense and whimsy of the original books are irresistible fodder for artists and a natural subject for MOMIX, who take it to the outer limits of the imagination. Sections of Alice are named for events that occur in the books, but it does not follow the story in a strictly linear way.

Like the titular Alice adventures, the forward motion of the MOMIX version was nearly nonstop and frenzied. It opened placidly enough with a stage-filling enlargement of a black-and-white photograph of Carroll puffing written captions out of his mouth that cryptically introduced the performance.

Following this, Alice, in a long, flowing, white gown, appeared to be floating center stage, reading a book, with "Alice" printed on the cover. Gradually, we saw that she was sitting on a sort of ladder swing that was maneuvered by a male dancer in 19th-century dress – all this against a bucolic river-scape. They danced together and apart on this swing, until she went up and up and up and the scenery swirled into blackness.

The neon blue outline of two shoes – on feet or hands – appeared in the darkness for a brief run down the rabbit hole, where we met the Mad Hatter, another Alice, and doors of various size. These scenes segued seamlessly into one another as if in a dream. Of course, the whole thing was fantastically dreamlike.

Three girls – or were they puppets – appeared with kaleidoscopic projections on them. One became larger, one smaller, then all were tall. They leaned from side to side and finally collapsed.

Rabbits in orange leotards and stylized masks moved as one creature, then separately in front of a huge iron clock projected on the upstage wall, alluding to the White Rabbit's perpetual tardiness.

Then, four dancers in large baby-head masks and flesh-colored leotards leaned on one another in a hilarious and bizarre dance.

A projection of a cat obscured the entire upstage wall in "The Cheshire Cat." A single ballerina en pointe danced to music by Danny Elfman, as the cat changed into what might have been a dragon, then back into a cat with spiraling red peppermint eyes. The scene ended with the cat transforming into a dizzying whirling red vortex.

In a lighthearted piece, "Advice from a Caterpillar," dancers in red sneakers performed with large blue exercise balls. The balls bounced, the dancers bounced, and all converged at one point into something like a caterpillar. Simultaneously, they were mysteriously reflected or projected on the upstage wall.

"The Lobster Quadrille" – "Will you, won't you, will you, won't you, won't you join the dance?" – was performed by female dancers who brilliantly manipulated a black and a red skirt each. They morphed from ladies dancing in conventional skirts and bodices to impersonations of all sorts of sea creatures, both real and imaginary. The accompanying song by Franz Ferdinand was used in the 1999 made-for-TV Alice in Wonderland.

The music and the sound design were as dazzling as the visual components – the kaleidoscopic projections on the upstage wall and the dancers themselves. Musical choices ranged from "The Sea" by Joey Pecoraro to "White Rabbit" by Jefferson Airplane (specifically Grace Slick).

Look forward to a gorgeous aerial piece in the second act performed by a dancer in a fluttering scarlet dress suspended above the stage, and another by two dancers playing with giant floating roses. The occasional use of gray scale instead of vivid colors in the projections gave the eyes a little rest, but you can expect to feel slightly over-stimulated when you leave.

MOMIX: Alice marks the end of this year's Appalachian Summer Festival, the first fully-produced Festival since 2019. From Marty Stuart and His Fabulous Superlatives to Renée Elise Goldsberry to the Rolston String Quartet, it was full of joy and uplift.

Somewhere near the middle of Alice, I realized that there was nothing topical or relevant about it (unless it was about a world that we can't make sense of, and there's some comfort in even that). What an incredible relief to just watch the magic unfold on stage where the flights of fancy never end, and our minds can simply rest in art, whimsy, and beauty.