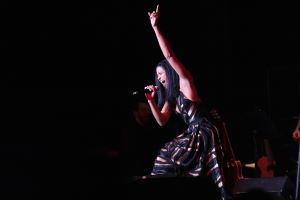 Renée Elise Goldsberry's performance Saturday night at An Appalachian Summer Festival was more than a concert: it was a revival of love, hope, and unity, all offered up on a rising tide of glorious music performed by transcendently skilled musicians.

Goldsberry's show was part of the Schaefer Popular Series, which, in turn, is part of the annual An Appalachian Summer Festival that will continue through July 30 with a variety of classical and popular music, film, lectures, and dance performances. It will conclude July 30 with MOMIX's (dance) new show, Alice.

Early in the concert, she stated her goal of manipulating the audience to fall in love with love, with brother love and sister love and love of humanity, using jazz, blues, pop, rock, soul, folk – oh, and some Broadway showtunes. She said that she wanted to make us remember who we are, what unifies us, and what we are here to do.

"This show is about love," she said. "And the bridges that are possible. Love can be a bridge from this world to the next."

In the beginning, her band took the stage and played a brief introduction before she joined them, and they all launched into "On a Clear Day You Can See Forever" from the musical of the same name. It was modern Broadway royalty singing a Broadway classic.

Goldsberry is best known as the singer-dancer-actor who originated the role of Angelica Schuyler in Hamilton, the musical that broke Tony Award records with its 16 nominations. It won 11, including Best Musical, as well as a Pulitzer Prize for Drama in 2016. It also made its mark on theatre history with its hip-hop sensibility, use of rap music, and casting of BIPOC performers in the roles of the American Founding Fathers. Goldsberry can be seen in the 2020 filmed stage production currently streaming on Disney+. She also starred on Broadway in The Lion King, The Color Purple, and Rent.

From "On a Clear Day," the band segued into another uplifting song, "I Can See Clearly Now." With the changing colored projections on the upstage wall and music director Jordan Peters' rock-guitar solo, I felt strangely transported back to the '60s – the best parts.

Determinedly upbeat, Goldsberry exhorted the audience, "Are you ready?" before being joined on stage by her terrific backing singers: Kristina Nicole Miller, Tasha Michelle, and Adee David. They provided a moving rendition of the gospel-tinged R&B ballad "People Get Ready," a song that displayed the growing social and political awareness of its author, Curtis Mayfield.

Gladys Knight's "Imagination" was a great song to follow that: "I've got to use my imagination to think of a reason to keep on keeping on. Got to make the best of a bad situation." The drum performance on this was notable with a tom-tom heavy solo from Zach Mullins. Mullins and bassist Kyle Miles kept the beat driving and compelling throughout. Piano/keyboardist Addison Frei got to shine especially on "Bridge Over Troubled Water."

Keeping to the social-political theme, Goldsberry followed this with "Up to the Mountain," a Patty Griffin tribute to Martin Luther King Jr. It says that from the mountaintop, we can see in every direction, we can get perspective; in the valley, we can find peace.

The backing singers took center stage on "The Gospel of Sweet" by Sweet Honey in the Rock, and a rocking gospel/folk medley in which that the band kept just this side of chaos, so great was its ebullience and pure joyousness. Songs included "We Who Believe in Freedom (shall not rest until it comes)" and "Come and Go with Me to that Land."

"Beat Out that Rhythm on a Drum," a song from the movie Carmen Jones (1955, memorably performed by Pearl Bailey) based on Bizet's opera Carmen, was especially fun and once again showcased the talents of Mullins. "Beat Out that Rhythm" plays around with the "Gypsy Song" from Carmen and contains the line "There's one big heart for all the world."

After a few more great standards, including "Misty," Goldsberry got to the part most of us had been anticipating – her best-known showtunes. She started with the beautifully polyrhythmic "Shadowland" from The Lion King, the heartbroken and heartbreaking ballad of longing for a lost home.

When she sang "Satisfied" from Hamilton, much of the audience sang along on the toast, "To the groom … To the bride." Goldsberry dazzled with her rapid-fire rap, bringing her rich and expressive voice, face, and body to bear on "Schuyler Sisters" – "Look around. Look around … at how lucky we are to be alive right now … history is happening," – and a medley from Rent that included "There's No Day but Today" – “There's only us. There's only this. Forget regret."

As if that wasn't enough, Goldsberry and the band returned for an unforgettable encore, a rock-anthem version of that most uplifting of showtunes: "You'll Never Walk Alone" from Carousel.

Goldsberry achieved what she set out to do. She revived us, made us feel love and joy, and reminded us that while we may be on different boats, we're all riding out this stormy life together. Hallelujah!