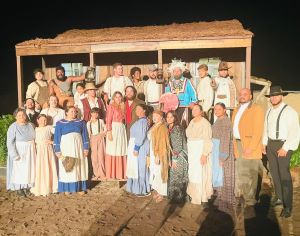 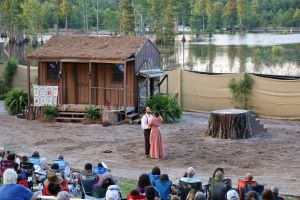 Tuesday night, the Lumbee Cultural Center began their four-night performance of Strike at the Wind, directed by Dr. Jonathan Drahos, who is also Director of Theatre at UNC Pembroke. The production, a joint project by UNC Pembroke and the Lumbee Tribe, follows the life of Henry Berry Lowry, an Indigenous outlaw who, along with his gang, fought for justice, opportunities, equality, and recognition for the Lumbee people. Throughout the play, Lowry experiences the brunt of a segregated world in which Indigenous people are treated as less than human, and the grief of fighting for change. After the murders of his father and little brother, Lowry’s feelings towards injustice were ignited and he began to settle the score by working for his community through various acts and deals until his disappearance in 1872.

The play, which has been a large part of the Lumbee community since 1976, finally returned to the Lumbee Cultural Center this year after a decade-long hiatus. This production is an outdoor drama, with the audience sitting in lawn chairs. The outdoor setting emphasizes the story’s time period and the play’s historical elements. The set further emphasizes this context with the presence of an old-fashioned home, a jail cell, and a center stump that was often a central point of the action. While the set was significant, it was the strong performances of Bill Oxendine as Henry Berry Lowry and Cheyanne Ward as Rhoda Strong who brought the story to life. With their performances, the audience was transported back in time and enveloped in a story that is not only true but also has had an personal, emotional impact on each member of the Lumbee Tribe, past and present.

Due to the historical nature of the play, much of the music was reflective of the Tribe and their religious background. As people settled into the amphitheater, hymns were played over the speaker. The cast also sang hymns during the show, which proved to be integral to the production. Additionally, a drummer and singer, who functioned as a figurative representation of death, would appear whenever a man was killed or died. The pair would circle the slain and walked them off the stage. The mixture of tradition and religion represented elements of the community that are both historically and modernly important. The significant and impact of the music truly resonated when the audience would join the cast in singing, particularly for songs such as “In the Pines,” a commonly known song within the community.

Due to the outdoor nature of the play, much of the set pieces were stationary. However, that stationary quality was used to great effect in supporting character’s movements, such as running, dancing, and hiding, making the actions seem more natural.

The choreography is excellently crafted, and that excellence is best and most fully displayed during the shootout scenes, which require perfect timing. If these sequences had been poorly executed, much of the storyline would have been lost regarding who had been killed or left alive.

For most of the play, the lighting was a general wash that reflected the time of day. However, during scenes that were highly emotional or included murder, red lights were used to symbolize the bloodshed and horror that had taken place. Other times, blue lights were used during melancholy scenes, inspiring empathic responses from the audience. These color choices provided heightened moments of the play with an even more profound impact, enriched with the emotional connotations of each color.

Though microphones would sometimes lose audio, it did not happen frequently enough to disrupt the play. On these occasions, the cast managed to speak and sing loudly enough to continue to be heard by the audience.

All elements of this production worked together to tell the story of Henry Berry Lowry and the sacrifices made in the name of creating a better future for the Lumbee community. Such congruence strongly brought home the show’s core purpose: showing the importance of fighting for equality and justice, while also highlighting the discrimination and struggles of the Lumbee people in the late 1800s.

With the return of Strike at the Wind, the Lumbee Cultural Center has not only reignited the Lumbee people’s love for this play but also their pride in Henry Berry Lowry and his heroic actions. Stories about the Lumbee people often are not known by the masses, or misunderstood if they are told outside of the community. However, under Dr. Drahos’ direction and desire to accurately represent Lowry’s story, the play showcased the Lumbee people’s resilience and long-standing fight for justice and equality, for education, voting rights, and their pride for their community. The set, lighting, music, choreography, and performers brought history to the modern stage with a passion for the past and by respecting the culture and portraying historical figures with accuracy and compelling emotion.

Strike at the Wind continues through Friday, July 15. For more information on this production, please view the sidebar.