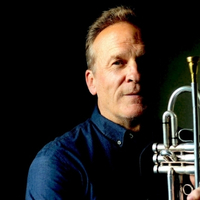 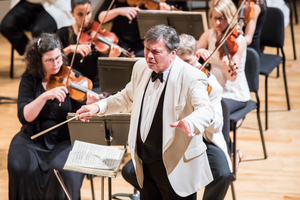 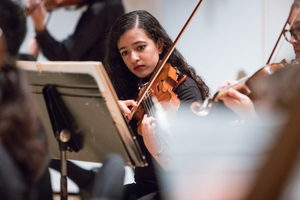 Week three of the Eastern Music Festival season is full of performances by our faculty artists, fellows, and Adolphus Hailstorks’ world premiere! Highlighted composers encompass classics from the Baroque and Classical Periods, along with pieces by American composers.

Eastern Chamber Players featuring EMF Faculty Artists, includes Mozart's Oboe Quartet, with Randall Ellis as lead oboist; along with a piece inspired by Mozart; Diamond in the Rough by Michael Daughtry; Adoration for 6 Violas by Florence Price who was influenced by the writers, artists, and ideals of the Harlem Renaissance; and Dvořák's String Quintet to wrap up the night. The evening of invigorating chamber music will be held on Tuesday, July 12th at 8PM in Dana Auditorium.

EMF and the Greensboro Opera are partnering up once again to musically transport audience members to Paris. Join us at this Signature Performance on Wednesday, July 13th at 6PM or 8PM at Temple Emanuel, for a night of I Love Paris. The evening will feature GSO Opera favorites’ Detra Davis, Robert Anthony Mack, Donald Hartmann, Benjamin Blozan, and others celebrating Paris as a preview of GO’s production of La Bohème in November. Viva la France!

This weeks’ Guest Masterclass will be taught by Santiago Rodriguez, who has been called “a phenomenal pianist” (The New York Times). The class will take place in the Carnegie Room, Hege Library at Guilford College on Friday July 15th at 4PM. This masterclass is free and open to the public.

The last concert of the week, Saturday, July 16th at 8PM, will be performed by EMF’s acclaimed Eastern Festival Orchestra, including solos by faculty trumpet player Chris Gekker, featuring classic works by Diamond and Mahler, and a world premiere by Adolphus Hailstork. Adolphus Hailstork wrote: “These four pieces were written to be used as separate service pieces or as a suite. I then decided to orchestrate them as a concert suite. I had some themes that reminded me of church hymns, especially processionals, from my early years growing up as a singer in an Episcopal cathedral. I kept envisioning entrance music when I worked on Hymns 1 and 2, then a quiet hymn (with a minor key ending!) as might occur in a Black church for no. 3, and, finally, a buoyant exit song for the recessional as the church doors are flung open to the sun.”

EMF Encircling the City with the Greensboro Public Library provides an educational performance and service-learning experience. EMF String Fellows quartets travel to Greensboro libraries for a free short program. On Wednesday, July 13th at 10:30AM, at the Kathleen Clay Edwards Branch. (Catch all of the EMF library performances - as well as many other fun storytime sessions and activities on the Greensboro Public Library's calendar of events!)

To explore the background behind Thursday, Friday, and Saturday evening’s compositions and composers, join musicologists, Dr. Greg Carroll and Maestro Peter Perret for our Musically Speaking program at 7PM. All pre-concert talks are free and open to the public.

As varied as these season highlights appear, the EMF Experience each summer is so much more than the performance. EMF is an unforgettable learning experience for dedicated young artists from across the nation, an enriching and entertaining social encounter for our patrons, and a celebration of incredible artistry.