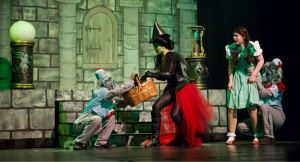 On Thursday night, the Carolina Civic Center kicked off their four-night performance of The Wizard of Oz, directed by Kendrix Singletary. The musical, which follows the beloved novel and film, tells the story of an unlikely band of friends as they journey to Emerald City, with each of the characters searching for a single something to complete their lives. Unbeknownst to any of them, what they were searching for (a home, a heart, a brain, and some nerve), they have had all along. As the protagonist, Dorothy Gale meets her friends (the Cowardly Lion, the Tin Man, and the Scarecrow) as they make their way through perilous lands and evade the villainous plans of the Wicked Witch of the West. They sing, laugh, cry, and learn that there is truly no place like home.

With respect to the original musical, this stage production features several songs from the original film as well as much of the dialogue. In addition, the performers seemed to perform with a nod to each of their classic characters. Hector Miray portrayed the Cowardly Lion with comical gestures and facial expressions, T.J. Lewter embraced the role of the Tin Man with stiff movements, and Ryley Floyd, contrastingly, embodied the role of the Scarecrow with limber and flexible movements. Madison Cain delivered Dorothy Gales’ meek but strong demeanor with undeniable talent. However, it was Val Humphrey’s portrayal of the Wicked Witch of the West that stole the show. From the infamous cackle, villainous demeanor, and overall wickedness, Humphrey brought the Wicked Witch from screen to stage.

While the performers’ understanding and dedication to their characters were prominent factors in the show’s success, it was the production’s ability to balance respect for the original musical with their own individualism and personality that made the show stand out as a production of its own. For example, the characters often made pop-culture references as comic relief rather than strictly relying on the original screenplay. By incorporating modern references but remaining true to the overall musical, the production was able to relate to the audience doubly, as people who understand modern culture but also as those who enjoy classic tales.

As the story progressed and moved locations, the show’s flexible set likewise reflected those changes based on the scene, allowing the audience to understand where the characters were on their journey. This was especially integral in distinguishing if the play was merely shifting focus from one character to another or if they were moving locations all together.

For most of the part, the set consisted of large constructions specific to their respective location. However, for certain scenes, such as the moment when twister hits Dorothy’s home, a large screen featuring edited material showed Dorothy shivering in fear as different items flew past her in the wind and various members of her family as they experienced the twister from the storm cellar. The footage, while effective in progressing the story, was slightly distracting in its editing choices. Despite the editing and overall filming of the footage, the method of continuing the story without the budget of a larger production was extremely well-done. The choice to use the footage allowed me to better understand the story, more intimately experience each character’s current situation, and make predictions about what was going to happen next. It served to provide clear and smooth storytelling.

Technical elements of the show went off without a hitch. Sightlines were unobscured; the performers, songs, and score could be heard and understood; and there were no sound malfunctions or mic feedback.

The lighting was used effectively to enhance the show. When the twister arrives and the family becomes increasingly distressed about a missing Dorothy, the overhead lights began to flash red and move in a circular motion. The choice to move the lights in such a manner inpsired thoughts of sirens, ambulances, and general emergency personnel, connoting the scene with a sense of urgency and danger. The lighting was often appropriately matched to the setting. When Dorothy is traveling the yellow brick road, the overhead lights were yellow as well.

The cohesion of the design elements of this production allowed the audience to be fully immersed in the story and feel as though they were one of Dorothy’s friends.

With The Wizard of Oz, Carolina Civic Center has retold a classic story of friends with some delightful new elements. Though the story it has been portrayed by Hollywood legends and read in schoolrooms for decades, it was brought to life again by a production team and ensemble whose talents provided the show with a renewed presence. The actors made their characters real by understanding them, embodying them, and portraying them with the respect you would hope to see of such beloved figures. This production effectively told the story of home in a way that was not only entertaining, well-done, and comical, but ultimately allowed the audience to feel at home with characters that are as familiar as family.

The Wizard of Oz continues through Sunday, June 12. For more details on this production, please view the sidebar.