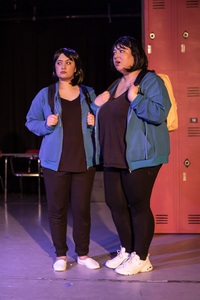 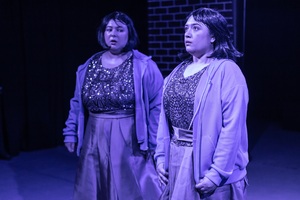 Bulldog Ensemble Theater is back with their first production since the COVID, a high-paced, engaging performance of playwright Jiehae Park’s Peerless, now performing at Walltown Children’s Theatre in Durham.

A contemporary adaptation of Shakespeare’s Macbeth, Peerless combines awkward romance and comedic musings on mortality with the sensitive and serious matters of life, death, murder, and guilt, all in service of offering a playfully chilling and dangerous satire on college admissions, teenagers, and race. Asian-American twin sisters M (Pimpila Violette) and L (Sarah Koop) will do whatever it takes to go to The College. They care about two things: their academic ambitions and each other. When their classmate, D (Samual Brown), who happens to be one-sixteenth Native American, receives “their” spot, M and L mirror the Scottish tragedy and opt to kill him by tree nut cookie. With D’s brother suspicious of his death and tensions growing between the sisters, they begin to fall into paranoia, hearing teeth and hands chewing and hallucinating D as a Native American chief. It’s just as Dirty Girl (Ella Mock), the representation of the three Witches, predicted … demise and destruction ensue when ambition, in this case the desire for academic success, is left morally unrestrained.

Directed by Katy Koop, the five actors flaunted a well-rehearsed and unwavering chemistry that only strengthened their clear understandings of their characters. Opening the play with an extended exchange between twins M and L, Violette and S. Koop displayed lovely, effortless camaraderie as they finished each other’s sentences and anticipated the other’s thoughts. Such rapport continued throughout the performance, its ease sustained in the sisters’ interactions and translated to the conversations with D and BF (Foye D. Thornton III). Thornton successfully presented himself as the proportionately nervous and confident teenager we tend to envision, fighting fluently with Violette’s character and begging the question of “Where does he fit in this puzzle?”

Investing himself in his loud, flamboyant character who entertains an (un)conscious death wish and shares a bit too much about himself, Brown thrived in his role as D. He communicated social and sexual tension well and was fully committed to every aspect of his performance from humorous bad dancing and self-deprecating remarks to nervous kisses and convincing convulsive death by allergic reaction. On stage, I didn’t observe an actor playing a role, I watched a young man entangled in the many intertwined strings of teenage existence.

Each actor was fit for their role, however, in my eyes, it was Mock who stole the show as Dirty Girl. In their unkempt wig, flannel, and boots with a cigarette in hand, Mock became the strange, enigmatic prophetic high school girl. They captured the mellow, nonchalant quality of the character, offering a prediction and surmising an outcome before energetically dancing (if you can call it that!) and feeding the rats in their coat pocket.

The success of these five actors in their encounters and conversations was outstanding. Between the spritely, spiteful arguments of M and BF, the careful kisses and unlikely sexual tension surrounding D’s EpiPen, and the ultimate physical sisterly fight provoked by guilt and delusion, the intriguing performance is due largely in part to fight choreographer Heather Strickland and intimacy coordinator Mock. Such work perfecting the physical side of acting supported the advanced, overlapping dialogue.

A side note on the subject of dialogue: One word in the opening conversation between M and L unsettled and dismayed me. To describe D’s brother, who lives with cystic fibrosis, the twins used the R-word, the word “retard(ed),” multiple times. In the long, quick-paced, gossip-filled discussion that introduced the sisters, slangy teen lingo was used as M and L concluded that D was accepted into The College because of his brother’s state of “personal retardation” due to his cystic fibrosis. In searching for a justification for use of the R-word, I recognized the word does set up M and L early on as cruel characters. However, with an abundance of other examples of their cruelty (including killing another student), the use of the R-word did not seem a necessary marker to make this distinction. Perhaps the intended reason for Park to write characters who use the R-word was to show how teenagers can be naive and ignorant in their thoughts and words about their peers, often saying hurtful, inappropriate things to set themselves apart. If this was the intention, it was not very clear, and instead, I found the word served as a hurtful form of exclusion rather than the impactful educational moment that I hoped for. Rather than mention, “Oh, that is not an appropriate phrase to say anymore,” the sisters grieved that if L had a disability, M would be going to The College, too. Peerless premiered in 2015 after the use of the R-word began to be challenged. At point of conception, efforts by organizations such as the Spread the Word to End the Word campaign had already been working to eliminate the use of the R-word and build “inclusion for all people with intellectual and developmental disabilities.” Because education toward this end is important, and the R-word, as I understood it, was not employed in the play to educate on its harm, it is my opinion that additional measures to elucidate the hurtful meaning of the word should be taken, and perhaps Park should adapt the script to reflect society’s capacity to evolve its use of language.

As far as execution of this production, stage manager Grace Bolton has led the production staff well. Set designer Jeffrey Nugent has created an inventive, minimalistic set with eight-feet-tall, reversible, interchangeable door panels that allow each scene to bleed into the next. Such an “interchangeable” approach was mirrored in the costume design by Emily Johns. The sisters were dressed in matching outfits, differentiated by red and yellow backpacks and hairbows that allowed the twins to switch places throughout the show. Their matching costumes were used as props to enhance the story.

Lighting and sound, designed by Erin Bell and Juan Isler, respectively, worked together to create a technically advanced production in the intimate black box theater. Flooding the room and covering the audience, full stage lights bled red light, echoing the blood on the sisters’ hands and contributing to their haunting paranoia. With speakers emitting layered sounds of perfectly timed phone text tones and the eerie, uncomfortable noise of teeth and hands eating, the technology complemented the work on stage and created a tense environment of discomfort and anticipation.

From the dramatic art seen in the performance of the plot to the technical theatre skills recognized from my seat, the production was engaging and impressive. All came together to truly illuminate Peerless as a wonderful retelling of Macbeth contemplating affirmative action, cut-throat college admissions, and headstrong academic ambition. I was awed by the work of this cast and staff as they transported me back to my days of college applications, exposing a truth that I hadn’t considered before… the world of college admissions is, in a way, Shakespearean.

Peerless continues through Sunday, May 29. For more details on this production, please view the sidebar.