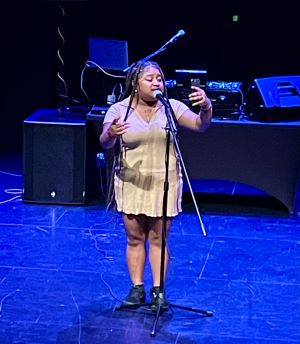 The kick-off for the second annual Lyrics by the Lake at Southeast Center for Contemporary Art was a joyful celebration of spoken word, poetry, rap, visual arts, and community.

Despite getting pushed inside by the weather, the event's co-hosts Corey Jones, aka Mr. Petty, and Larry Barron, aka LB the Poet, and DJ Fame got the party going in SECCA's auditorium, while unique vendors plied their wares in the gallery space outside the auditorium. The whole affair was artful, fun, and illuminating.

Petty and LB introduced the myriad artists with masterful transitions, and Fame played great segue music and fanfare-like samples between the acts.

Visual artist Hannah Chavis, 15, stitched the show together by painting onstage the entire time. Her figure of woman with white curls on a deep purple background was auctioned off at the end of the evening.

LB, a highly regarded hip-hop artist who teaches at the Winston-Salem Street School, gathered up his students in the W.O.R.D. Academy to open the show. Barron's colleagues in the W.O.R.D. Society performed the second half with local rapper MontytheHokage providing a grand finale. (W.O.R.D. stands for Writers of Raw Distinction.)

The theme running through the work of the W.O.R.D. Academy poets was a rousing declaration that nobody needs to be defined by their circumstances or their mistakes: acknowledge what happened, learn your lesson, and move on. All wise beyond their years, the poets in this group were IV Wisdom, Prophet, Ashes to Ashes, Leah, Isaac, Jah-Nil, and A.J.

IV Wisdom, aka Myrelis, started the show with a poem called "Sleep" and then came back in the penultimate spot with a spirited piece about agency called "I Am." When she read, "I have the ability to sweep myself off my feet," I bought it, 100 percent.

Next up, Prophet read, "I am a revolutionary in progress. … a work in progress." Ashes to Ashes read a sweet, insistent love poem. Leah, who got a Happy Birthday shout from the crowd, read, "It's my year."

Isaac read an affecting poem about growing up without a father, refusing to be defined by that, and choosing love of family over drugs.

Jah-Nil read his "Manifesto." A.J. declared he was 17, going on 18, "my childhood coming to its expiration date. … Mistakes are just a wake-up call."

Leah closed out the student portion of the program with "I Am Chosen": "Writing was the thing that helped me clear my mind. … Music is my path. … I am chosen. "

Then the W.O.R.D. Society took over, starting with Mr. T. Walker who brought with him a beautiful, glittering staff topped by an ankh shape with a serpent's head in the center, a truly magnificent piece of art that made his words all the more impactful: "Approach me with all caution. … I'm about to bust loose. … Lately I'm a magnet. … Money finds me attractive. … There's flowers in the vase, Diamonds in the face. "

E'laina Barron, aka Ely B, was a force on the stage. Small but mighty, she declaimed in "Coming Into My Blackness," "I've always been Black, and I've always been proud," and went on to describe the trials of living in two different worlds – one Black, one white – and her decision to "no longer be concerned about white people's comfort."

Earlier in the program, LB had called for a moment of silence to honor the loss of one of the W.O.R.D. Society members Main Man. In "Main Attraction," Ely B declared, "Give it everything you got. Leave the audience with a piece of you. … He kept his mind loaded, and every barrel was full of lead."

When learning of Shaun Woods, aka WitNess', wife's pregnancy, Main Man had said, "I can't wait to meet my niece."  In a passionate piece, WitNess shared the grief of losing his Main Man and his unborn daughter two days apart.

In another poem, WitNess intoned, "I never needed a dollar to know what wealth is. … Circumstances compromise your health. … Why start looking back when there's a lot in front of you?"

Dion Williamson, aka Sh8kes, continued with the theme of lessons learned with the words, "I learned to value my relationships more than my ego."

James Triplett, aka Kyng, talked about how to have a good day. He said that if you had $1,440, you wouldn't throw it all away just because $30 or $40 of it was torn or defaced, so why have a bad day just because a few minutes wasn't the best?

And in a poem called "Bruce Willis," riffing on the Unbreakable trilogy by M. Night Shyamalan, Kyng said, "I'm not that easy to break. … I'm built to last." He did another really clever piece that went through the entire alphabet using alliterative stanzas: "I can fly but I'm featherless," etc.

Headliner and local rapper Montelle Lemon, aka MontytheHokage, bounded onto the stage and performed to beats provided by Fame.

On one song, Cohlman Bishoff joined him on stage, and Monty said, "We are rappers. Rappers usually lie about having money in their pockets. We live in Winston-Salem, so we're broke," getting a good laugh, and sang, "As soon as I get it, I spend it."

As an entrepreneur as well as a rapper, Monty said he does about 70 things at one time, and rapped a song, called "Barely Enough." And he talked about how songs can predict the future, and that his life has just caught up with his art.

He was joined by guitarist Jeremy Alexander, bassist Jonathan Cook, and Philip Lee, aka Old Chingu (Korean for friend), and they did a pop-chart worthy piece called "Weekend Getaway" that is definitely going on my road trip playlist.

But wait, there's more. … Coming shows will feature Tukool Tiff, Cyanca, and Colin Allured, as well as some of the artists in this first show.

The festivities start at 6 with about an hour to shop with the vendors, including E'Tiphany Healing Candles & Gifts, Hempress Farms, Collage to Heirlooom, Pickle Stan, Copper Vibrations, Lizzie's All Natural Products, Live Alkaline Water, and Southern Munchiez (tacos). Beer, wine, and soda are for sale, and the show starts at about 7. See the sidebar for information about future performances.