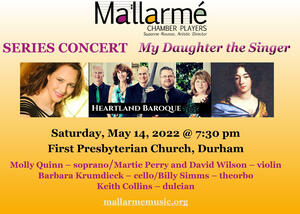 This preview has been provided by the Mallarme Chamber players.

Heartland Baroque, together with Guest Artist, Molly Quinn, Soprano, combine music and narrative in a concert celebrating Venetian-born composer Antonia Bembo (circa. 1640-1720), My Daughter the Singer. Giving insight into the lives of women composers of the Baroque, as they often overcame excruciating circumstances, Heartland Baroque is eager to tell Bembo’s inspiring story through her music and readings of documents from her life. Bembo survived personal tragedy and creatively reinvented herself. A student of Cavalli, admired for her singing, Bembo had a tumultuous family life. She suffered abandonment and abuse from her unfaithful husband, and though she brought him to trial for his crimes, he was found not guilty. With the help of guitarist Francesco Corbetta, Bembo fled Venice for France. Once established in Paris, Bembo became revered by King Louis XIV for her exquisite compositions, and he later granted her a pension. Bembo’s ability to continue her career despite adversity shows her profound versatility. Music of Francesco Cavalli, Giovanni Legrenzi, Antonia Bembo, Francesco Corbetta, François Couperin and others will be featured.

Hailed for her “radiant sweetness” by the New York Times, Molly Quinn has garnered praise for her thought provoking and delightful interpretation of music from the medieval to the modern. She has collaborated with notable musicians and arts organizations around the globe including The Knights NYC, Portland Baroque Orchestra, Apollo’s Fire, The Folger Consort, The Bang on a Can All-Stars, TENET, Trinity Wall Street, Ascension Music, Clarion Music Society, Saint Thomas Fifth Avenue and Concert Royale, Pacific Baroque Orchestra, North Carolina Baroque Orchestra, Ensemble VII, The Helicon Society, Quicksilver Ensemble, and Acronym. Molly has also garnered acclaim for her work crossing genres in classical, folk, and contemporary music. Molly was dubbed "pure radiance" by the Los Angeles Times for her work with The Bang on a Can All-Stars in Steel Hammer. The production traveled to Abu Dhabi in 2017. Other highlights of the past season include her Kennedy Center Debut as the title role in Dido and Aeneas, and the role of Papagena in Die Zauberflöte with Clarion Music Society, where Opera News dubbed her “A lovely and feisty companion.” She has been featured in projects by notable presenters including The Lincoln Center White Lights Festival, Moscow’s Gold Mask Festival, BAM Next Wave Festival, Bang on a Can marathon, San Francisco Early Music Series, and Carnegie Hall’s Venetian Festival. She is a festival soloist at The Staunton Music Festival, and staff musician and featured soloist at The Carmel Bach Festival. She was a featured soloist on Trinity wall Street’s Grammy Nominated recording of Handel’s Israel in Egypt. She has performed as a soloist in such noted international venues as Shostakovich Hall in St Petersburg, Teatro National de Costa Rica, The Arts Center of NYU Abu Dhabi in the United Arab Emirates, Vancouver’s Chan Centre for the performing arts, and San Cristobal Cathedral in Havana, Cuba.

Bound by a passion for playing instrumental music of the 17th and 18th-Centuries, Heartland Baroque is an ensemble made up of respected early music specialists from all over the United States. Its members Martie Perry and David Wilson, baroque violins; Keith Collins, dulcian; Barbara Krumdieck, baroque cello; and Billy Simms, theorbo; hail from North Carolina, Indiana, California, and Maryland, and often perform together in other well-known historically informed period instrument ensembles around the country. Heartland Baroque dives into the Baroque musical world with vigor, showing off the immediacy and technical brilliance, the vivacity and profundity, the lilt, complexity, and spontaneity of its composers. Heartland performed one of the featured concerts in the 2018 North Carolina HIP Music Festival and most recently, the group was awarded a residency at the esteemed Avaloch Farm Music Institute. Heartland Baroque has also performed concert tours in North Carolina and has presented fringe concerts at the Boston and Berkeley Early Music Festivals as well for the Early Music Festival for Grace. The group’s debut CD, The Benevolent Monarch, will be released in 2022.