US Premiere Keynotes Symphony Concert, with Multiple Thrills and Triumphs to Follow 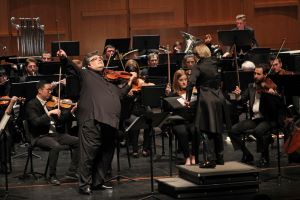 There had been no foretelling that five weeks ago, the Belk Theater stage would be splashed with the colors of Ukraine's flag for a Charlotte Symphony concert. Nor could guest conductor Karen Kamensek, making her Charlotte debut, have predicted that the music she was bringing to Knight Theater would be so pertinent to this moment: a symphony by a Finnish composer written in response to Russian oppression in 1902, and two pieces written by Russian-born composers, one of them publicly condemned by the Stalinist regime in 1948. Sadly, these works by Jean Sibelius, Victoria Borisova-Ollas, and Dmitri Shostakovich have new life and fresh significance today as the world trembles, anticipating the full consequences of the horrific Russian aggression unleashed by its unhinged leader.

Written by Vladivostok native Borisova-Ollis, a longtime Swedish citizen, in 2008 for the 850th anniversary of Munich, Germany, Angelus had its long-overdue United States premiere. Nor was the Chicago-born Kamensek unworthy of the honor, having conducted the 2022 Grammy-Award winning recording of Philip Glass' Akhnaten with the Metropolitan Opera. Although the upstage at Knight Theater wasn't lit up with Ukraine's colors, there certainly was an auspicious tableau – and a sense of occasion – as a phalanx of percussionists were spread across the rear of the orchestra, bells and drums and cymbals further brightened by the sounds of piano, celesta, and a pair of harps. The composer's account of how she fulfilled the Munich Philharmonic Orchestra's commission, reprinted in the digital program, lays heavy stress on the stroll she took through the city and the recordings she made of its church bells, so that aspect of the piece underscored by Kamensek's spoken intro was eagerly anticipated – a pacific, spiritual answer to Putin's insane "de-Nazification" rallying cries.

What was surprising for me, especially in light of Borisova-Ollis's description of the opening of her Angelus as "a hint of a Celtic chant," was hearing principal violist Benjamin Geller playing a melody, over soft tremolos from the string section, that unmistakably resembled a traditional Passover song, one that I had heard in synagogue as recently as that morning. The predicted bells would eventually arrive in three or four waves, but not before we heard from the trumpet, the horns, the timpani, and the clarinet. Extending beyond 20 minutes, not at all a bonbon typically programmed at the beginning of concerts, the piece was studded with unusual instrumental effects – like a brief organ-tuba duet – and swirling, cresting climaxes. Even as she built to the first tolling of the tubular bells, Kamensek's interpretation was more bustling and boisterous than Skari Oramo's relatively quiescent recording for BIS with the Royal Stockholm Philharmonic. Since Kamensek lists one of Borisova-Ollis's operas, Dracula, among her credits, expect to hear more from this composer-conductor pairing in the future.

Shostakovich completed his first violin concerto just one month after his denunciation, but he and violinist David Oistrakh, for whom the work was dedicated, had to wait over two years after Stalin's death – more than seven years in all – to respectively hear and perform the premiere. Although I own two of the Oistrakh recordings you can access on Spotify, I can only trace two prior occasions when I heard this epic piece performed live, once by the Charlotte Symphony in 2001, when young Caitlin Tully was hampered by the acoustics of the First United Methodist Church, and once at the Verbier Festival in 2006, when violinist Vadim Rapin and conductor Yuri Temirkanov fired off all burners with a student orchestra that was on par with the Spoleto Festival's.

Charlotte Symphony subscribers greeted concertmaster Calin Ovidiu Lupanu with an ovation that probably would have startled Repin himself, and the violinist seemed buoyed by the occasion. While Lupanu didn't quite replicate the sublimity of the opening Nocturne in the 1956 recording by the Leningrad Philharmonic with Oistrakh and maestro Yevgeny Mravinsky, he came breathtakingly close, enough to earn another ovation between movements, and the slashing energy and brightness he brought to the ensuing Scherzo – coupled with the brio Kamensek drew from Symphony in this catchiest movement – earned an even more-deserved ovation afterwards. Kamensek and the CSO met the grand challenge of the Passacaglia, infusing it with martial gravity, and Lupanu played with more eloquence and fire than I've ever heard from him, carrying forward a thrilling momentum into the Andante – Cadenza portion of that movement and, without an interval for the audience to express its enthusiasm, into the final Burlesque, the shortest section of the work. Cheated of the chance to explode after the Cadenza by the onset of timpani for the Burlesque, the audience redoubled its fervor at the rousing conclusion. Fortunately, Lupanu had an encore at-the-ready, a lovely Sarabande from Bach's Partita No. 2, the first encore performed at a CSO concert since before the pandemic.

Of course, if you were among the legions who can't get enough Sibelius, the Symphony No. 2 after intermission, while significantly statelier and more reposeful than the concerto, was anything but an anticlimax. However neatly the oppressed narrative might fit current anti-Russian sentiments, Kamensek seemed to take the quieter episodes of the opening Allegro as subdued rather than oppressed, with an incipient optimism ready to burst forth with ebullience or blossom into grandeur. The opening of the ensuing Andante, ma rubato can sound morose and grim on recordings, but at the Knight, where the pizzicatos of the basses and cellos could sound lighter and livelier, buoyancy lurked within the quietude, so transitions to anger and reflection sounded more natural. Once again, the two final movements were linked without an interval, punctuated by another brief timpani tattoo, but this time followed with trumpet heraldry and a grand orchestral flowering. Repeated lulls and swellings reaffirmed the triumph, beautifully calibrated and fervently delivered.