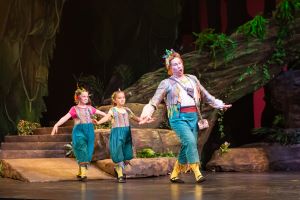 This past Friday night, the North Carolina Opera opened its production of W. A. Mozart's The Magic Flute. The beautiful Memorial Auditorium at the Duke Energy Center for the Performing Arts was bustling with anticipation prior to the start of show, and this energy remained in the hall throughout the performance. The season's finale had been originally scheduled for April 2020, but had to be postponed due to the ongoing COVID-19 pandemic. However, NC Opera has reported that this has been their most well-attended season, indicating how needed the return of live theatre has been for everyone. This excitement was palpable, especially amongst the many young families in attendance.

The Magic Flute is one of Mozart's most well-known works, full of fantastical plot and humorous music that removes one from the concert hall and follows the course of events of a magical forest and its inhabitants. The opera follows three heroes: Pamina, the lost daughter of the Queen of the Night; Tamino, a prince tasked with saving Pamina; and Papageno, the endearing comic relief who just wants to drink his wine with a companion. Supporting characters include the Queen of the Night, a sorceress who seeks power; Sarastro, the guardian of a forest sanctuary; Papagena, the female counterpart to our comedic relief, and the Three Spirits and Three Ladies, two trios who offer asides to the audience and aid our heroes on their quests. After trials and tribulations, each character is rewarded with their heart's desire and love vanquishes darkness.

The vocal prowess demonstrated on last night's stage was wholly mesmerizing: the chorus displayed awareness of ensemble while the principal singers dazzled with individual skill. Sarah Tucker's interpretation of Pamina had both delicate innocence and rich emotional depth, and I was blown away by her ability to sing extreme pianissimo – kudos to the orchestra as well for matching the dynamic range with sensitivity. Prince Tamino and Papageno, sung by tenor Joseph Dennis and baritone Hugh Russell, respectively, created one of my favorite aspects of the show with their clever comedic chemistry and timing. Tamino's princely stature and Papageno's silly antics add necessary balance to each character, and Dennis and Russell portrayed this friendship endearingly with commendable vocal technique as well. The Three Ladies (Sarah Rogers, Stephanie Foley Davis, and Kate Farrar) played off of this dynamic brilliantly, and delivered their melismatic lines like sirens to the foolish men; the Three Spirits (Rae Fredette, Chelsea Huber, and Rachel Stenbuck) balanced the Ladies' alluring energy with a gentle sound, gracefully guiding our heroes with angelic harmonies. I was so impressed with the resonance of Hidenori Inoue's bass range for Sarastro, which wonderfully contrasted the Queen of the Night. Rainelle Krause sang the coloratura role with an accuracy and tenacity that I had yet to experience in live theatre, and do not expect to recreate anytime soon. There simply are not enough words to praise how Krause navigated the melismas and piercing high notes, with fantastic musicality and wickedly engaging acting, and after her aria in Act II, the audience cheered for a full thirty seconds.

Following Maestro Keitaro Harada with accuracy and awareness, the pit provided a perfect bed of sound for the company. The overture set the tone with triumph and sparkle, and this character lasted throughout the following two and a half hours. The strings played continuous eighth-note passages with matched articulations and awareness of the action onstage, and the winds passed around melodic material seamlessly. Special commendation to both the flute and celeste players, whose solos directly correlated to pantomimes on stage and went off without a hitch. The set design was jaw-dropping as well; the curtain rose and revealed a large tree trunk that served as a staircase, upper platform, and archway for action upstage, and the log had plants and vines attached. The attention to detail added to the otherworldly quality of the show, and the backdrops were painted to match; the props of the show were camp in the best way, such as the huge serpent puppet with goofy eyes or the use of kites-on-a-stick to represent birds. The light design went hand in hand with the plot, transitioning between cool and warm tones to represent sunrise and sunset or flickering boldly for lightning, and I especially loved the use of a star curtain to depict the twinkling night sky.

The North Carolina Opera's production of The Magic Flute is absolutely stellar and I cannot praise the cast and crew enough. The care and work that has gone into this show is vastly evident, and I wish everyone involved toi toi toi for Sunday's matinee.

The Sunday matinee information can be viewed in our sidebar.