An Unsung Hero of the Underground Railroad: Sanctuary Road 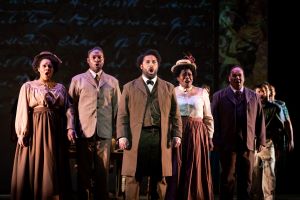 The remarkable heroism of abolitionist William Still was brought to life by the North Carolina Opera's world stage premiere of Sanctuary Road in Raleigh. A figure of repute lost to history, Still was a savior for many. As a conductor of the Underground Railroad, Still helped as many as 800 enslaved people escape to Canada through free states before the outbreak of the Civil War. During his life in Philadelphia, Still kept a detailed record of his experiences as a conductor and documented many of the stories he heard from those who had escaped the shackles of slavery. After the conclusion of the war, Still compiled these accounts and self-published them under the title The Underground Railroad Records (1872). It's these inspiring writings that serve as the textual source material for Sanctuary Road.

First premiered as an oratorio, composer Paul Moravec and librettist Mark Campbell saw an opportunity to expand on the naturally theatrical elements in The Underground Railroad Records. Venturing into what they dub as "operatorio," this dramatized stage production captures the collage-like quality of Still's journaling. Framing the stage, set designer Brian Ruggaber's assorted patchwork of runaway slave posters and headlines reinforced this quilted aesthetic.

The opera began with a recitation of names. Staggering their entrances, tenor Norman Shankle, mezzo-soprano Taylor Raven, soprano LaToya Lain, and baritone Malcom Merriweather introduced the names of their characters. Taken directly from Still's writing, each name belonged to a real person that he aided in their escape of enslavement. Listing the names alone, the recitation remained discernable. But as the cast described their characters, the circumstances of their birth, the estrangement from their families, and the locations of their enslavement, the text became dense and the subtlety of each detail faded in obscurity. Parting the din, baritone Benjamin Taylor as William Still uttered his first words, "The Underground Railroad." Ushering the introduction forward, Taylor sang the foreword as he detailed the myriad means people found their way to the Underground Railroad and the fervor with which he chronicled their stories. Taylor's rich, baritone voice was an excellent medium for the austere yet compassionate portrayal of Still.

Further developing the exposition, "Quietly" illuminates the hushed prayers for freedom among a group of slaves before the jarring "Reward," when the full chorus appears on stage, revealing the masters' ravenous search for their runaway property. "The Same Train" is when Sanctuary Road's mosaic storytelling really took off. In the scene, Raven as Ellen Craft cautiously sang of her calculated escape by train. Disguised by costume and makeup, Craft hides in plain sight as a sickly white man traveling north to visit a doctor. Nervous already, Craft nearly folds under the pressure when she suspects her cover is blown after being spotted by a member of her master's family.

Both Raven and Lain struck me with their particularly nuanced expression and musical gestures. Set like individual vignettes and augmented by moody, spine-tingly musicianship from the orchestra, Sanctuary Road illuminated several stories like Craft's. Shankle's frightened conviction in the reoccurring chase scene through the woods, illumined by Driscoll Otto's lighting design, was arresting, and the humor injected by Merriweather as he pantomimed being shipped in a crate brought some much-needed levity to the story. Through these scenes and the series of interviews conducted by Still, the cast, creators, and directors were able to bring immaculate detail to the history of an event shrouded in mystery.

Uplifting and inspiring, Sanctuary Road's final scene provides the optimism necessary to move forward. After unearthing the writings he had hidden during the war, Still reflects on his life's work and the impact he was able to make. Alongside his own writings, Still reads the letters he received from those who escaped the South. Overflowing with exaltation and gratitude, the energized chorus joined the primary quintet on stage for a glorious ending on a resounding, sustained shout for freedom.

The success of Sanctuary Road is momentous to be sure. And for Campbell and Moravec, this is just the start. Commissioned by the Oratorio Society of New York, the two collaborators have two more American historical oratorios in the works. A Nation of Others is set during one day on Ellis Island in 1921, and All Shall Rise will mix personal stories and speeches concerning American voting rights.

On a personal note, I'm grateful to Moravec and Campbell, director Dennis Darling, conductor William Henry Curry, and the entire cast for bringing such vitality to Sanctuary Road. As someone who has lived near the West Coast most of their life, I've never felt so close to the history of American slavery. The recitation of names at the beginning recalled for me the endless names compiled by the "Say Their Names" Project. And while listening to the testimonies of those who escaped from cities as close as Charleston, I felt the discomfort in the audience grow as our spatial and temporal proximity became clearer. As Moravec and Campbell's work has done for me, I anticipate that Sanctuary Road and their future projects will play a valuable role in bringing Americans closer to their own history in a time when understanding the past feels crucial for moving into the future.