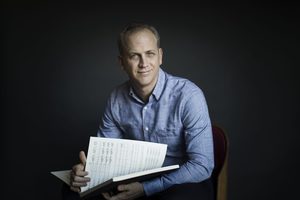 This article was provided by the North Carolina Symphony. You can read the full article on their website.

Carlos Miguel Prieto is celebrated worldwide for his collaborative style, charismatic conducting, expressive interpretations, premiering and personally commissioning works by composers of the Americas, and his efforts to foster cultural exchange through music. Through the years, Prieto has led the NCS in a range of adventurous programs featuring works by Anna Clyne, Gabriela Ortiz, and many others. At the time that Prieto was recognized by Musical America as their 2019 Conductor of the Year, Yo-Yo Ma was quoted, saying, “Carlos Miguel is a conductor for our 21st century.”

“This is the beginning of a new era for the North Carolina Symphony,” said Don Davis, Chair of the NCS Board of Trustees. “I am honored to announce Carlos Miguel Prieto as the symphony’s next Music Director. In partnership with the incredible musicians of the symphony we have named an artistic leader, who with our CEO, Sandi Macdonald, sets the stage for what will undoubtedly be a bright musical future for our great North Carolina Symphony.”

Sandi Macdonald, President & CEO of the NCS said, “Quite simply, Carlos Miguel Prieto is exactly the right artistic leader for the NCS today and into the future. Carlos has been part of our family for more than a decade already, and the affinity between him and the musicians has been striking. With his appointment as Music Director, we have ensured the opportunity for this most promising partnership to continue to grow. Carlos shares the orchestra’s commitment to creating extraordinary musical experiences and connecting with the people of our state.”

“The chemistry between Carlos Miguel Prieto and the musicians was palpable as we considered the future of the NCS, a key resource and cornerstone of the cultural life of this state,” shared Catharine Arrowood, Chair of the NCS Music Director Search Committee. “We are thrilled to begin this new artistic chapter with Carlos’ leadership.”

The state of North Carolina’s orchestra, NCS has served richly diverse communities throughout the state for nine decades. NCS, which partners with the world’s greatest talents, is dedicated to giving voice to new art, and embraces artists with ties to the state, including recent collaborations with NCS’s 2021/22 Composer in Residence Anthony Kelley and composers Caroline Shaw, Sarah Kirkland Snider, Judd Greenstein and with William Brittelle whose commission, developed out of NCS’s multi-year residency with the Eastern Band of the Cherokee and was performed throughout the state and at the Kennedy Center as part of their inaugural SHIFT Festival. Each year, more than 300 concerts, education programs, and community engagement offerings reach adults and schoolchildren in all 100 North Carolina counties—in a variety of venues based in communities large and small, as well as through new online programming. In addition, NCS leads one of the most extensive education programs of any symphony orchestra in the country—serving over 100,000 students each year. Now, in partnership with Carlos Miguel Prieto, a community-focused and artistic visionary, the NCS is poised to thrive long into the future in service through music, to a growing audience throughout the state and around the world via the digital space.

Prieto returns to the NCS to conduct the opening concert of the 2022-2023 classical season at Meymandi Concert Hall, Duke Energy Center for the Performing Arts in Raleigh. He succeeds Grant Lewellyn, who served with distinction as Music Director of the NCS for 16 years. The NCS pays tribute to Lewellyn and his legacy with a celebratory performance on May 14, 2022, with soprano Renée Fleming.

“With a combination of great joy, gratitude, and a deep sense of responsibility, I am formalizing my partnership with the North Carolina Symphony today. I am excited to grow a relationship with its sensational musicians, staff and board, which started in 2011, when I was first invited as a guest conductor. Our recent concerts together solidified my belief that this is a world class organization – and proved to be the inspiration I so desperately needed given the difficult pandemic times. The NCS plays a central role in the life of its community, in a way I have rarely seen before. I am honored to join this community and will help, in any way I can, bring the message of hope, joy and unity that music provides, at this critical time in our lives.

Growing up in Mexico City, I started attending a summer camp on the NC coast at the age of ten. It was there where I learned English and began a love affair with this gorgeous state – and where our children remain involved to this day. I look forward to getting to know NC even better through the symphony’s many statewide tours and educational offerings.

Just a few weeks ago, I attended an educational concert of the NCS in Raleigh. It was so inspiring and uplifting that I was moved to tears. The orchestra’s sincere, relevant and deep commitment to education through music resonates profoundly in me. I am proud to join an organization whose values are so much in line with my own. For the last twenty years I have toured every country in the Americas, and am convinced that an orchestra can, and must play a huge role in bringing diverse people together, building communities through the universal power of music.

Today, we are starting a partnership which is very important to me and to my family, one for which we are infinitely grateful. I look forward to learning from an organization and a community that is vibrant and thriving. I look forward to the personal bonds and friendships over the next years. But I mostly look forward to serving with all my energy and love.”