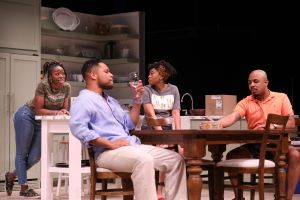 After delaying opening night in order to firm up precautions against the wave of the most recent COVID-19 variant and then facing a bout of winter weather threatening the already rescheduled opening night, Playmakers Repertory Company's proverbial curtain rose this past Saturday evening on Stick Fly, by Lydia R. Diamond, directed by Kathryn Hunter Williams. Diamond's script captures a glimpse into the lives of six characters as they intersect at a beach house in Martha's Vineyard.

Dr. Joe Levay (Oscar Best) is hosting his two sons, Kent (Anthony August) and Flip (Jamar Jones – U/S), at the family beach house for a weekend to meet their love interests: Kent's fiancée, Taylor (AhDream Smith), and Flip's casual girlfriend, Kimber (Tori Jewell). The family is tended to by Cheryl (Omolade Wey), daughter of the regular housekeeper and a long-time family friend. Diamond infuses layers of complexity by bringing together characters of different races and socio-economic statuses, grounding the work in relevant social issues and raising the stakes by combining people who fall in varying places on many different spectrums. The Levays are a wealthy Black family, grappling with the stereotypes they face in a society dominated by Whites. Taylor, raised by a single mother in a middle-class upbringing, struggles to fit in with the Levays, despite being adjacent to wealth with her late, estranged father, a high-profile Black intellectual. Kimber, upper middle class and White, repeatedly vocalizes her understanding of Black experiences, but misses the mark, as those born to White privilege inevitably do. Cheryl seesaws between observing the wealth of the Levays her family serves, feeling as though she has a place in this household, and resisting shame in knowing she returns to a home much less highly regarded by society.

Playwright Diamond spends the majority of the first act almost completely on character development, with the exception of a volatile confrontation between Taylor and Kimber. With every character juggling multiple interests and relationships, Diamond's work charges the actors with a tall order of weaving a complex web of connections and revelations within a seemingly mundane "meet the parents" event. The challenge makes Stick Fly an appropriate pick for Playmakers, given their association with UNC Chapel Hill's Professional Actor Training Program. Straightforward production elements provided a fairly open world for character development.

With a focus on '90s and 2000s pop and R&B, Michael Betts' sound design subtly focuses attention on the Levay brothers and their partners, who likely most enjoyed music from that era of the multiple generations represented. Latrice Lovett's lighting design effectively establishes time of day, with general washes behind the windows of the beach house evoking sunsets, dusk, and early morning sun. Anita Tripathi's multi-leveled beach home setting provides a single set with differentiated spaces, making for efficient transitions between scenes. This was an absolute must for the two-and-a-half-hour runtime already crammed full of conversations surrounding classism, racism, romance, and fidelity. The set, along with Pamela Bond's costumes, established the status of the characters who owned them. The Levays are dressed neutrally, with enough details to convey their wealth, Taylor is casual enough to stand out as "other" from the Levays, and Cheryl appears even further removed by her relaxed, youthful clothes. Kimber's style conveys her privilege as well as the eccentricity that sets her apart before her dialogue even begins.

Complexities of the relationships and script notwithstanding, on opening night, the cast further wrestled with the newfound obstacles that COVID-19 presents to theatre. With a delayed opening, and a rehearsal process surely affected by the challenges of collaboration these days, the company of Stick Fly carried Diamond's work with a couple of standouts. Oscar Best was steady, grounded, and consummate as the elder and patriarch Dr. Levay, flawed though the character is. AhDream Smith played quirky and impulsive Taylor with honesty and openness that was matched by Omolade Wey's candid and thoughtful capturing of Cheryl. Notably, Jamar Jones took on Flip Levay as the understudy on opening night. He effectively harnessed the notion that Flip may be following in his father's footsteps in more ways than one and seemed well at ease with a company perhaps more accustomed to Khalil Asaldo in the role. Anthony August played a sympathetic and convicted, when necessary, Kent Levay. Tori Jewell embraced Kimber and leaned into a character who is controversial and perhaps even unlikeable at times, particularly to the benefit of her scenes with Smith.

Lydia R. Diamond calls on elements reminiscent of Chekhov in that, at first glance, Stick Fly appears to be about "the day nothing happened," until something BIG happens and then all hell breaks loose. Further reminiscent of Chekhov, the final scene offers no answers or resolutions to the conflicts and questions that arise on stage. Playmakers has taken all this in stride, presenting a cast of characters that rejects the traditional structure of a protagonist with an antagonist and instead offers an unfiltered snapshot of humanity, for better or worse.

Stick Fly continues through Sunday, February 6. For more details on this production, please view the sidebar.