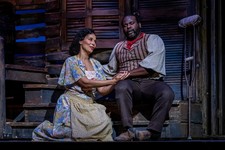 It's been a long time coming. Greensboro Opera originally began planning to stage George Gershwin's (in)famous opera Porgy and Bess four and a half years ago. They hoped it would be the first performance in the Tanger Center in 2020. But, as we all know, the pandemic changed everything. Friday night's winning performance was seen by a large audience, hearty folk who were not deterred by the snow that was sure to fall during the show.

George Gershwin (1889-1937) finished writing the controversial opera in 1935 with a libretto written by author DuBose Heyward and lyricist Ira Gershwin. It was adapted from Dorothy and DuBose Heyward's play Porgy, an adaptation of DuBose's 1925 novel. Porgy and Bess was first performed in Boston on September 30, 1935, before it moved to Broadway, with a cast of classically trained African American singers. Although the work received an unpopular reception, it has become recognized as a (perhaps the) great American opera.

A fast overview of the story: Porgy is a crippled beggar, who falls in love with Bess, ostensibly a drug addict and girlfriend of Crown, who is prone to violence, drinking, and gambling. Toss in Sportin' Life, a drug dealer, and a setting in a slum district of Charleston, SC called Catfish Row, and you have all the makings of a controversial, negative, and stereotypical depiction of the lives of African Americans in the Jim Crow South.

While the title roles certainly carry the action forward and sing several wonderful songs, the ensemble of close to 30 residents are given about half of the opera's music. Other "secondary" characters are also given major arias that have become standards.

Thomas Cannon sang Porgy with hearty intensity. Although most of his character is serious and profound, tenderly dramatic pieces like "Bess, you is my woman now" (a duet with Bess) showed his strong emotion. His presentation of "I got plenty o' nuttin'" was joyously robust. Cannon's convincing acting was strong throughout.

Greensboro native Rhiannon Giddens was Bess. Her lovely soprano voice was evident in such arias as "I loves you, Porgy," a delight to hear. She captivatingly displayed her conflicted nature of wanting to be with Porgy, yet being attracted to the excitement of drugs and Crown's sexuality.

Michael Preacely demonstrated the threatening nature of Crown to a T, which ultimately reveals itself when he commits drunken murder in the first scene. Preacely's swaggering style as he vulgarly sang "A red-headed woman" confirmed his despicable character.

The stage lit up every time Robert Anthony Mack danced or sang as Sportin' Life, whether selling "happy dust" to Crown or teasing Bess with promises of a high life in New York. His unique take on Bible verses in "It ain't necessarily so" was a showstopper. His temptingly sung "There's a boat dat's leavin' soon for New York" convinces Bess to join him and escape from Catfish Row.

Serena was powerfully portrayed by dramatic soprano Angela Renée Simpson. Her wailing singing of "My man's gone now" was intensely moving. As the pious keeper of Catfish Row, she firmly rejects Sportin' Life's biblical interpretation with her "Shame on all you sinners!"

The most famous piece from the opera, the lullaby "Summertime," was wonderfully sung by soprano Indira Mahajan as Clara. Clara's husband Jake, convincingly sung by UNCG graduate and baritone Sidney Outlaw, offered "A Woman is a Sometime Thing."

Legendary opera star (and the first Black tenor to sing at the MET) George Shirley sang the role of the peddler "honey man" Peter. Greensboro native Elvira O. Green (also serving as Artistic Advisor for the GO) sang the role of Maria, the cookshop owner. Maria is Green's signature role, having sung the role at the Metropolitan Opera as well as around the world. Her rebuke of Sportin' Life, "I hates yo' struttin' style," was full of nuanced threats, perfectly delivered.

Tenor Chauncey Packer was double cast as Robbins, whom Crown kills in the first scene, and as the distinctively sung "crab man." Paisley Alexandria Williams memorably sang the role of the Strawberry Woman. Donald Hartmann as the detective, A. Robinson Hassell as Mr. Archdale, and Robert Wells as the coroner provided strongly etched, white characters.

Holding the large cast together was conductor Awadagin Pratt, who led with minimal fuss while bringing exciting sounds from the orchestra. The ensemble was populated with fine players, many from UNCG. Pratt's musical direction was always supportive of the singers. Everett McCorvey, stage director, kept the action moving with clarity.

I mentioned earlier that the chorus' role in the production is huge. James Bumgardner served as chorusmaster, superbly preparing the ensemble. Special kudos go to GO general and artistic director and producer of Porgy, David Holley. His vision and perseverance for the last several years has finally come to fruition with a wonderfully successful production of this classic American opera.