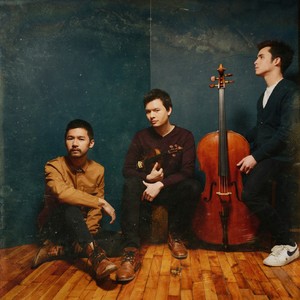 As part of the Chamber Arts Series, Duke Performances hosted the recently-established Junction Trio. Saturday evening had been slapped with a winter weather advisory ahead of Winter Storm Izzy, but a devoted contingent of listeners braved the pre-snow hours to attend what was an absolutely stunning evening of wild compositions.

Violinist Stefan Jackiw, cellist Jay Campbell, and pianist Conrad Tao are all young – yet solidly established – musicians in their own right, and have each performed in some capacity for Duke Performances, but this was Junction Trio's first visit. The eerily-lit stage (DP tends to begin performances with bluish lighting in Duke University's ubiquitous school color) was the perfect opening for the ethereal "Ghosts" by John Zorn. This 2015 work, loosely inspired by Beethoven's "Ghost" Trio in D Op. 70, No. 1, lacks more than the occasional unified rhythmic line or traditional (read: pleasant) harmony. Its language is thoroughly contemporary, full of harmonics, pizzicato, plucked piano strings, and other modern playing techniques. The players conveyed the sense of "crazed meditation," as Jackiw described it: controlled chaos journeying through creepy motives and disparate sounds that occasionally resolved and came together, but ultimately exploded into a final, atonal burst of emotion. The trio's nonverbal communication was seamless as the players seemed to organically explore the motion of the piece, moving from idea to idea with a nod here, a breath there, or even a smirk at a particularly engaging phrase. It gave the work a sense of palpable curiosity, making every moment of dissonance or seemingly random motion fascinating.

The next work stepped back over a hundred years in time but was full of even more spirits of memory: Charles Ives' Piano Trio. Composed soon after his graduation in 1898, the trio is a great example of Ives' attempts to express ideas in his own musical language, subverting musical rules his teachers had tried to impose upon him. The trio features multiple meters and key signatures happening simultaneously, as if three musicians in adjacent practice rooms were all blasting out their favorite folk tunes. The second movement is playfully titled "This Scherzo is a Joke," as it quotes countless tunes from Ives' childhood, meanders into whole-tone harmony followed by dissonance, and ends with an abrupt, silly cadence.

Junction Trio honored this sometimes-ludicrous work with a frisky attitude, but retained the emotional authenticity that is at its heart. The players languished in the dissonances, not fighting for superiority over each other but taking the time to enjoy and develop the chaos. Their balance was impeccable, when their individual lines were troubled and disparate, and when they satisfyingly converged. The fun and jaunty quotes of folk tunes in the second movement could swing very freely, but then stop on a dime and dissolve with ghostly precision into a tender hymn fragment. The whole work was exploratory but expertly prepared, showing off an impossible range of volume, timbre, style, and velocity.

Although apparently added at the last minute, the final work was no less impressive: Schumann's Piano Trio No.1 in D minor, Op. 63. Apparently, because of COVID-19-related scheduling difficulties, one of the planned works fell through and was replaced with this one; had I not known this, I never would have guessed it. The work fit in with the others so well and was just as lovingly explored. The opening of the first movement emerged from absolute silence in a seamless swell that rose to a symphonic sound full of stormy dissonances, and even featured an occasional slight offset between melody lines that was reminiscent of Ives' simultaneous melodies. Though rooted much more strongly in Romanticism, Schumann's work is full of just as many extremes as the others. Tao's sparkling chords overlaid by Campbell's ethereal harmonics were again ghostly, and both Campbell and Jackiw used vibrato to deliberately change the colors of the lines they played in the slow third movement, revisiting plaintive, reflective ideas. The extreme softness of the end of the third movement was dazzlingly resolved into a passionate swell at the beginning of the final movement, which again felt playful but emotionally earnest.

The pairing of these works was an absolute delight and drove home the versatility and dedication of the trio as they breathed new life into older works and lent accessibility to more difficult contemporary ones. Junction Trio plays with a perfect blend of professionalism, artistry, exuberance, and curiosity, giving interpretations of both contemporary and classical music a true sense of wonder. From Ives to Schumann to Zorn, every phrase was an exciting ride for both player and listener, and the two-hour concert was enchanting in its every note.