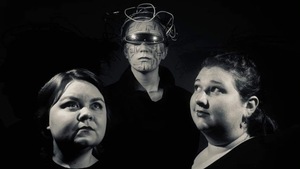 *This preview originally ran in January 2022, but has been revised to reflect updated show dates of March 25 and 27.

Skysail Theatre, a fledgling company made up of four tight-knit, multidisciplinary artists, will premiere its debut show at the end of January as a part of the Asheville Fringe Arts Festival, which is celebrating its 20th year of performance art, theatre, music, poetry, dance, and film this month.*

Cofounders of Skysail Theatre Lea Gilbert, Michelle Troszak, and Terran Wanderer, joined by actor Rebecca Boyce, who is also the stage manager for the production, met me for a Zoom call to discuss their upcoming show. This team is so vibrant and has such great chemistry – they even looked at birth charts and astrological signs when auditioning their cast (though they want it to be known that this didn't directly influence who they cast)! The cast and crew of four have put an incredible amount of time and hard work into their production, and it's a truly unique one. Tithonia: A Lesbian Space Opera is an original devised musical theatre production, a sci-fi rom-com hybrid with a cast of three: "morally upright (and uptight)" Captain Jaqueline (played by Boyce); "lovable, goofy mechanic Aria" (played by Shannon McKerlie); and the ship's AI interface, NANCI, Noetic Artificial Nano-Computer Intelligence, (played by Troszak).

A queer, Asheville-based company, Skysail Theatre is a multi-faceted group that has combined their talents and love for storytelling, music and theatre. Cofounders Troszak, Gilbert, and Wanderer were brought together one fateful night in the summer of 2021 at the Odditorium where they discovered their mutual love for creating and the performing arts. This company brings a "dash of outer space, a splash of humor, a little bit of gay, a lot a bit of silliness, and whole lotta love."

Gilbert explained that the "lesbian space opera" was "a brainchild of [Troszak]'s," conceived in 2019 after Boyce, Gilbert, and Troszak had returned from a collaborative devised theatre performance at the Edinburgh Fringe Festival. Troszak added, "Those words came out of my mouth about two years ago as a joke – and here we are."

All three already had backgrounds in movement-based and devised theatre, but in Edinburgh, they had the opportunity through UNC-Asheville to further their study, contracting the SITI Company for three months in Suzuki and Viewpoints methods of movement-based theatre. Their experience was "informative and incredible," said Troszak, "eye-opening as to what is possible with a small cast, and really minimal staging and set design. You can be really adaptive." Leon Ingulsrud from SITI was their director, a "guiding force" as they brainstormed, outlined, produced, and performed their show, Nothing's Happening: A Black Mountain College Project, based on John Cage's 1959 "Lecture on Nothing," a pseudo-organic spoken-word piece, with Black Mountain College history interwoven throughout. Gilbert said that this project in particular "was definitely about the journey and not about the destination, although we finally did make it to a destination." She lovingly jokes that Nothing's Happening was "the most obscene experience we've ever had," but notes that her "love for theatre was revitalized through this project…After the Fringe festival I knew that I needed to do theatre for the rest of my life. That cemented the need for me." Gilbert said that she is in love with the idea of fringe arts and devised theatre specifically; "coming together in a space where you have minimal sets, minimal design," and "you're just building something from scratch" and "wearing different - multiple - hats."

Wanderer and Troszak had worked on the 48 Hour Film Project together, and during a later gathering at the Odditorium in the summer of 2021, all four found common ground in their passion for devised theatre and Troszak floated her idea. "And it really exploded from there that night," said Gilbert. The group set to work brainstorming and outlining a story full of soap opera and sci-fi tropes, in a spirit that explored and celebrated queerness. With the goal of performing their new work at Asheville Fringe Arts, Skysail Theatre was born.

Tithonia: A Lesbian Space Opera is at its core a romantic comedy of errors, with the essential sci-fi race-against-time-to-survive trope. Tithonia plays with the notion of the "space opera," which does not necessarily involve music, cross-pollinating it with the classic "soap opera" and then plugging the result into a devised musical theatre production. Said Wanderer, "we didn't set out to tell a queer story, we set out to tell a good story in a queer space." Troszak agreed, saying, "We want to see these shows, we want to see these stories that aren't being told, so I guess we gotta do it."

Utilizing their collective skills, they crafted a story that is dramatic, funny, and genre-bending. Even as a devised theatre work, it is unique. "We have a script," said Gilbert, "I say that as a joke but also not, because devised theatre is, at its simplest definition, theatre without a script." However, there are still parts of the show that develop and change as it goes, developing and changing as much as the people involved. Wanderer wrote the majority of the script and lyrics based on long Zoom calls between the three cofounders. Wanderer said, "My favorite thing about collaborations is that you end up with stuff you never could have created on your own. I could have never have sat down and written this" without Gilbert and Troszak's ideas forming the structure of the narrative and giving the characters voices. All I did was write 40 pages of dialogue." Wanderer added that "[Gilbert] and [Troszak] are so funny…the outline I before I went and wrote the script is like three pages of super specific notes and live five pages of joking." Even though they put in a lot of hard work, the development process sounds like it must have been a blast. After several weeks of "us all riffing off of each other," said Troszak, Wanderer sent her the script to figure out how the "musical signature" would look, and the show evolved from there. Wanderer said Troszak's music "breaks my heart every time…It brings me almost to tears to hear it."

Troszak had previously done some songwriting, in addition to her vocal studies, dance, theatre, and circus arts training, but was excited to explore a musical theatre structure to "bring all those skills together into this multi-dimensional show." Troszak enthusiastically accepted not only the challenge of writing original music for a new show, but setting parameters for the show based on COVID-19 safety measures as well as sparse, devised theatre conventions. "So much is possible," she said. "So many amazing stories can be told, and you don't have to be a giant Broadway musical with millions of dollars of budget to…do something really meaningful and really touch people." She decided to limit the scoring of the show to her synthesizer, giving the songs a "very specific sound" that is "futuristic." The cast would be small – just two people, to adjust to the limitations of producing a show during a global COVID-19 pandemic – and the show would not exceed an hour. In this way, Skysail was able to develop a show that fit nicely into the Asheville Fringe Arts Festival lineup, and gave themselves a goal (and a deadline) so that the show did not keep evolving out of control. Although they did expand the cast to three, after a lot of hard work outlining and reworking the songs, script, and lyrics, the show came together beautifully, and the company is excited for its debut performance - now scheduled to be in person at The Magnetic Theatre on March 25, at 7pm.

*1.15.2022: Following recent COVID-19 protocol updates in Buncombe County, all in-person shows as part of the festival were postponed until March, according to the Asheville Fringe Arts Festival.