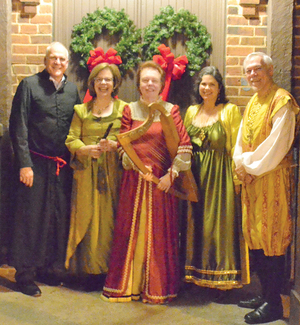 Carolina Pro Musica has always included a narrator to tell the story, keep the program flowing and show the context for the music. This year’s programs features medieval and Renaissance music and includes the “Coventry Carol” from 16th Century England after the reading from the Book of Matthew, which speaks of Rachel weeping for her children who had been killed in the slaughter of the innocents. There are a few medieval English carols and one from Prague. There are carols for all to sing like "Veni, Emmanuel," and "In Dulci Jubilo." Readings feature the prophecy of the birth of Christ, the angel Gabriel’s appearance to Mary, the angels’ proclaiming the birth to the shepherds, and a star leading the Wiseman to the Christ child. There will be a few 15th Century English poems and T.S. Eliot’s "Journey of the Magi," in which a worn-out magi speaks of his long journey to find the Christ child which changes his life forever. Bob Sweeten returns for the thirteenth time as narrator. For more than 20 years, he has been Max on the syndicated Bob & Sheri morning radio show that originates from Charlotte. In addition to his duties directing Bob & Sheri, he is active in local theater, often appearing with the Abbey Players/Belmont Community Theater among others. He has won Addy awards for his work in television and radio commercials.

Music will include selections from Europe and England. In reviewing a similar performance, Laura McDowell stated "they know this repertory very well, and they performed it in flawless ensemble." (CVNC). Carolina Pro Musica’s program will feature recorders (flauto dolce), viola da gamba, harp, harpsichord, and percussion. All these instruments are quieter than today’s modern counterparts. Members of the ensemble will join in singing on some selections and the audience will be a part of the singing experience.

Carolina Pro Musica was established in 1977 to promote the performance of music written before 1800 through the use of historic instruments and/or copies and in the performance practice of the periods in which the music was written.