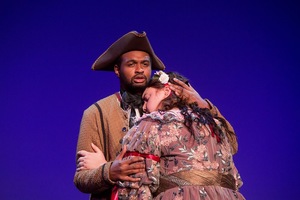 Celebrating the 20th anniversary of the A. J. Fletcher Opera Institute, members of the Opera Institute Workshop presented a collection of opera scenes on Sunday, November 21. Part of the Emerging Artists Series, eight graduate student vocalists from UNC School of the Arts put on a production in two parts. The first half of the program was comprised of six scenes from five different operas, while the second half featured selections from Rodgers and Hart, A Musical Celebration, a musical revue featuring music by Richard Rodgers and Lorenz Hart. The performance took place at the Hanesbrands Theatre in downtown Winston-Salem, and the black box venue was mostly full with vaccinated, masked, and supportive patrons.

The artistic director of the Fletcher Institute, Steven LaCosse, began the concert with a little housekeeping information and stated that this was the first live performance of the year for the Opera Institute. The excitement LaCosse gave off foreshadowed the high-energy and light-hearted performance to come. The singers wore full costumes and sang without masks, and each scene went off successfully with resonant projection, convincing acting, and whimsical choreography. While the set was minimal (a couple benches, a few tables, and small props at most), once each piece ended and the audience applauded the prior performance, LaCosse returned to the stage to provide plot information about the upcoming scene while the stage was being reset. Two of the scenes presented were from the same opera, Gaetano Donizetti's L'Elisir D'Amore, and LaCosse was sure to explain the connection between them so the audience would have a more enriching experience.

During his address to the audience between the first and second scenes (sampled from W.A. Mozart's Cosi Fan Tutte and Donizetti's L'Elisir D'Amore, respectively), LaCosse told the audience how nice it was to sing for a live audience again and that, coincidentally, each of the five operas presented that afternoon had been produced by UNCSA during the last 20 years. He also gave a shout-out to the UNCSA School of Design and Production, an individual part of the university that collaborates with the Opera Institute. I appreciated this because as the show progressed, it made me pay closer attention to more aspects of the staging and production — for instance, throughout both halves of the program, the lighting cues were smooth and matched the mood of the presented scene, which only enhanced the acting and music. The singers themselves were wonderful and I was impressed with the professional caliber they presented. Even without supertitles, I was able to understand the emotions and moods within each piece because of the nuanced acting and inflected musicality. A variety of voice types was presented, from soprano to baritone, and the scenes reflected each individual's ability to blend and project with appropriate vibrato, clear diction, and precise intonation. The scenes were accompanied by two pianists, Angela Ward and Neil Mitchell; both collaborators demonstrated sensitivity, and the vocalists made sure to acknowledge their efforts at the end of the first half with warm smiles and group bows.

After an intermission, the eight performers retook the stage in black suits and Golden Age-style dresses to perform songs by legendary Broadway composers Rodgers and Hart. The revue had an accompanying libretto that gave tidbits of information about the two prolific men and their contributions to musical theatre. This libretto made the show campy and fun, and the vocalists captured this essence throughout their performance. The songs themselves ranged between romantic and satiric, and the accompanying choreography reflected each individual mood. The energy was infectious: I found myself smiling throughout, and at one point I even saw Ward laughing to herself at the piano.

The revue was made up of 29 relatively brief selections that were displayed with efficient stage entrances and the aforementioned smooth lighting transitions. All of the performers did an absolutely superb job, each with their own unique ability to dazzle, but I have to give specific praise to Katherine Ledbetter for her performance of "To Keep My Love Alive" from the 1927 show A Connecticut Yankee. The song itself is funny, but Ledbetter's delivery made it absolutely hysterical. The song is about a woman who "bumps off" her husbands instead of divorcing them, and Ledbetter's timing, acting, and singing had the audience wrapped around her fictitious murderous finger, garnering tons of laughs and thunderous applause. As I stated previously, however, each performer did spectacularly and I would like to congratulate them all on a great concert. For the last six selections (including a stellar rendition of "The Lady Is a Tramp" by Danielle Romano), all eight vocalists were on stage and it was clear to me that this group of musicians truly cares for and respects each other. The marriage between classical opera and Broadway show tunes made for a lovely Sunday afternoon, and I will definitely be attending further performances from the A. J. Fletcher Opera Institute.