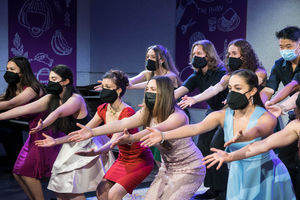 This past Saturday at the Rubenstein Arts Center, students from the Duke University Opera Theater put on a light-hearted and intimate cabaret of selections by prolific American composers George Gershwin and Cole Porter. The Ruby Lounge, a "study room by day, performance venue by night," welcomed masked audience members with subdued, blue lighting and round tables. LED tea-candles set the atmosphere of the venue, making it feel like a classic cabaret. After a warm welcome from director David Heid, the evening's pianist, Daniel Seyfried, took his place as the lights dimmed and the show began.

The full cast entered with enthusiasm and started the evening with "Another Op'nin', Another Show," the lively opening number from the 1948 musical Kiss Me Kate. The students wore singers' masks, but the extra barrier didn't diminish their enthusiasm or projection as they gathered on stage before traversing through the crowd. The following numbers segued into each other smoothly as performers entered and exited in groups of twos or threes. For solo songs, the singers would position themselves across the stage to observe their colleagues before being showcased themselves; ensemble tunes allowed the performers to interact with one another and the communication between them was apparent through well-paced choreography and musicality.

The audience wasn't given a program of the evening's selections; rather, a list of the thirteen performers' names was provided. While I'm accustomed to having a guide through an entire performance, the lack of program actually enhanced the experience as it forced the audience to simply listen and enjoy the moment without distraction. Not providing a program also fit into the style of a cabaret or Broadway review, as the pieces performed are often well known. Gershwin and Porter are especially iconic as songwriters who heartily contributed to The Great American Songbook, the canon of music from the Golden Ages of Jazz, Broadway musicals, and Hollywood films. The works compiled for the evening's performance were well selected and showcased the variety of moods and styles from that time.

After several classic tunes, such as "Can't Take That Away from Me," "Longing for Dear Old Broadway," and "By Strauss," the entire cast returned to the stage for "Blow, Gabriel, Blow'' from Anything Goes. This number marked the middle of the show and featured tap dancing that accompanied cute choreography and whimsical acting. The students bounced off each other's energy and were all obviously thrilled to be performing.

The flow of the program continued with "Summertime" from Gershwin's Porgy & Bess and the rest of the performance carried on with the same level of enthusiasm introduced at the top of the show. Solo songs contained individuality and heart, while duets and trios displayed sensitive ensembles and collaboration. Two duets that especially stuck out to me were "Friendship," performed by sisters Julia and Sophia Leeman, and "Brush Up Your Shakespeare," featuring Devon Carter and Matthew Bao. The Leeman sisters blended so beautifully and the wholesome personality of the song was displayed effortlessly by their charm. Porter's "Brush Up Your Shakespeare" was by far the campiest tune of the night, and the performers definitely knew how to ham it up. Full of Shakespearean references turned clever innuendos, the duet had the audience groaning at the puns and laughing at Bao's and Carter's choreographed antics — the tune had three false endings and each time they returned to the stage, the pair waggled their eyebrows mischievously before rousing the audience with further silliness.

The show ended with the full cast returning to stage for Gershwin's "I Got Rhythm," and this peppy number was the perfect end to a delightful program. The American standards that comprised the evening's program were full of personality, humor, and emotion, and each performer gave their all in contributing to these characteristics. The audience showed their approval while the cast acknowledged their steadfast piano accompanist with a bouquet of flowers. I want to give kudos as well; Seyfried showed incredible collaborative ensemble technique throughout the program — whenever I glanced his way, he was looking to the stage and following the performers with sensitive precision. The Duke University Opera Theater should be proud of their performance Saturday night, and I congratulate these young musicians on a successful cabaret.