Unveiling of Stephen Hayes' Sculpture Boundless Is a Major Event 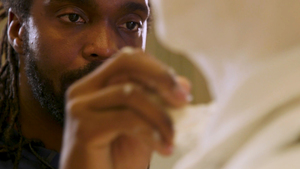 Wilmington's Cameron Art Museum has become a lively cultural center in recent years. The museum holds a regular schedule of classes, talks, tours of the collection, and concerts – all in addition to ongoing exhibitions. The Cameron reached international level with the opening in October 2019 of the Louis Belden collection titled The Eye Learns. This brought together the permanent Belden bequest of 134 20th century prints, with works by Alexander Calder, Robert Rauschenberg, and Pablo Picasso, among many others.

With the unveiling of Boundless, a sculpture by Stephen Hayes that will be on permanent outdoor display, the Cameron has built substantially on its presence in the Wilmington region. It was an auspicious beginning. According to the museum's count, upwards of 700 people visited the day's events, which, along with the unveiling, included living history demonstrations, storytelling, family events, and an indoor exhibit of Hayes' work, all free to everybody.

The Cameron has created an important contribution to historical memory as well. The land where the museum sits is on the site of a Civil War encounter, the Battle of Forks Road. This battle took place in February 1865, about five weeks after the fall of Fort Fisher, an event which signaled the nearing end of the war and has long been commemorated in Wilmington. By contrast, the Battle of Forks Road has scarcely been discussed here until very recent years. However, it is of unusual significance. It led to the fall of Wilmington, thanks to a major contribution by almost 2,000 members of the United States Colored Troops (USCT). These were regiments of liberated Black slaves who joined the Union Army. The story of freedom and sacrifice that their contribution embodies has great resonance and will now be celebrated in perpetuity at the Cameron Museum, where the events took place.

The title of the sculpture, Boundless, means in the literal sense "not being bound," in other words, "freedom." Unveiled in an 11:00 AM ceremony, it depicts three rows of three soldiers of the USCT marching intently in tight formation, left legs forward and carrying their packs, muskets, and canteens. Ahead of them is a drummer boy, and in front, the flag bearer. The color of the entire sculpture is a drab olive green, exactly befitting a sober, unadorned military scene. Actually, there are 2 ½ men in each row, rather than three. The third of each of the men ends halfway into the figure with a silhouette. One could imagine this as a metaphor for real rows of men which could have stretched into the dozens or the hundreds. This will be commemorated and documented on the sculpture itself. After a great deal of research, the names of the 1,820 USCT soldiers who marched into the battle on February 20, 1865 under withering fire – remnants of the Confederate earthworks are a few feet from the sculpture – have been ascertained. All of their names will be written on the silhouettes, suggesting lines of the men fighting for freedom extending as far as the eye can see.

Each of the faces in the sculpture is distinct and reflects an inspired choice by the artist. He cast the faces of people living now in a process that was interestingly shown in a short film during a presentation and discussion with Hayes and others in the afternoon. Those people are descendants of USCT soldiers, others who take part in reenactments of historic battles, Black veterans, and also people outside those circles. The idea was to carry forward the story of freedom to the present day and into the future. The front figure, the flag bearer, is a rendering of Clark Morgan. Morgan, as he recounted himself in the afternoon discussion, after becoming involved in doing reenactments, chose to play Milton Murray Holland. Holland was a Black man who, despite having light skin which would have enabled him to sign up for the Union Army as White, insisted on signing up as Black. At the morning unveiling, Morgan himself, in an act of homage – and a living example of carrying the story forward to the present and the future – placed the American flag into the hand of the flagbearer in the sculpture.

In addition to the permanently placed Boundless sculpture, the Cameron is hosting an indoor exhibit of Hayes' work until March 20, 2022. Hayes is imaginative. The works displayed show him creating in two and three dimensions, with a variety of materials, and in a range of sizes and designs. Voices of Future's Past, the title piece of the exhibit, consists of bronze busts of Black men and women with their eyes closed. As the sculptor described it, these are meant to suggest pondering the past and a possible future, versions perhaps of his own childhood self looking ahead to a future time. (Hayes' own young twins were ambling around during the unveiling, in their simple presence like living embodiments of what their father hopes to achieve.)

The largest and perhaps most impactful work in the exhibit was a tableau of some 15 full-body Black men, women, and children. The subject is the Middle Passage. Each of the bodies, "chattel," as the artist said, is shackled to a wooden boat-like shape. Chains run among all the figures. The viewer must go behind them to see the depiction of a ship's hold on each one, jammed full of prisoners soon to become slaves. This moving piece vividly presents the mute, naked individuals as embodiments of suffering and injustice, standing for the millions who came before them and would come after them. In front of the figures is a large, wooden rendering of the seal of the United States with the country's motto, "e pluribus unum" – "out of many, one." The work painfully challenges past failings and calls for the country to, in the memorable words of Dr. Martin Luther King, "rise up and live out the true meaning of its creed."

An hour-long ceremony led to the unveiling, a lustrous area event. It began with a procession of descendants of USCT troops and reenactors, led by the flag. Mary Williams sang the national anthem in impassioned, gospel-like tones. She later sang several more songs, including "No More Auction Block for Me" and "Oh Freedom," exhorting the several hundred gathered to sing with her – and LOUDER. There were grateful and celebratory remarks by, among others, Wilmington Commissioner Jonathan Barfield, Rebecca Quinn-Wolf from PNC Bank, which was a major funder of the project, and from artist Stephen Hayes himself. This climaxed and ended with the unveiling of the sculpture. For a long time afterwards, the crush of people was such that it was almost impossible to get near it.

Storytelling continued throughout the afternoon. Carolyn Evans passionately told about a slave woman. There were two remarkable high points: one in which she saves the life of a little girl being drowned by her own mother for possibly betraying a runaway slave, and another when she finds her own son marching in the celebration parade of a USCT regiment. Johnny Lee Chapman told the equally remarkable story of Powhatan Beaty, whose family was fortunate to move to Cincinnati, where he learned a trade and was mentored to successfully perform in the theatre. He joined the USCT and later became a successful stage actor, including of Shakespeare, at a time when the phrase "serious Black stage actor" was seen as a contradiction. James Brown told of a slave named Jack who tried to escape, was caught and almost beaten to death, and later was able to escape and join the USCT – proudly able to sign his own name on the enlistment papers. The story was accompanied here and there by music, with contributions by two other storytellers in ongoing call and response.

It was a day of beautiful sunny weather in Wilmington, of pride in the recovering of this important history, of sobering memory, and of high hopes for freedom in the present and the future. The Cameron Art Museum is making a significant contribution to this story.