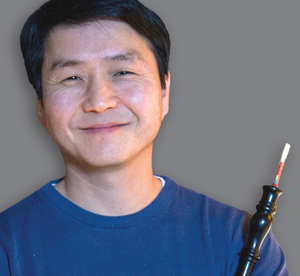 This is a celebration of our opening to live performances after a year of virtual concerts. Featured on the concert will be baroque oboist Sung Lee who is known around the Carolinas and in the Midwest for his musical expertise. This is the first time Sung has performed with Carolina Pro Musica. This will be a special treat for performers and audience alike.

The oboe has had numerous ancestors over the centuries. Some of these were used in battle situations as well as for dance music. This high (pitched) wood - in French the haut bois - is thought to have developed in France where King Louis XIV wanted an indoor version of the shawm. The famous instrument maker families Philidor and Hotteterre are credited with having started the oboe on its journey of becoming a refined instrument. Eventually there were famous German makers such as Denner. The instrument was first used in orchestras often doubling the violins. By the time of Bach, the oboe was playing obligato lines with singers.

Carolina Pro Musica’s concert “Oh Boy! The Oboe” features music with soprano and oboe, voice with recorder and oboe, and oboe d’amore. Instrumental works include two Teleman trio sonatas, one for oboe and recorder and one for baroque flute and oboe.
Eddie Ferrell, as usual, performs on the baroque flute and recorder. Sung also plays recorder. Works with two recorders add variety to the program.

Telemann’s Trio in E minor, TWV 42:e2 from Tafelmusik, is a typical 4 movement work with contrasting slow and fast movements. The two wind instruments often have independent musical lines with one seeming to have a melody and the other an obligato part. However, suddenly there will be a moment of imitation or a duet. Telemann explores the upper register of the flute against the alto-voiced oboe. In the last movement the continuo made up of harpsichord and gamba becomes the third partner in presenting a most interesting bass line while accompanied by the two wind instruments.  Telemann’s two other trios (Cm, TWV 42:c2 and F, TWV 42:F7) on the program contain highly imitative fast movements with all instruments playing the theme in fugal fashion.

The oboe’s expressive qualities can be seen in the highly emotion cantata by Handel “Mi palpita”. The singer portrays the palpitations of the heart and the torments of the lover. Handel seemingly torments the singer too with complicated musical lines as if to make the singer personally distraught.  In contrast the other vocal works, Telemann’s cantata speaks of Jesus’s healing power and greatness. It ends with Jesus’s call to all to be open to divine goodness.

Bach’s gentle aria from Cantata 144 is with oboe d’amore (an oboe pitched a third lower). The text states “Be content in your life with what God has given you”. The instrument and the voice appear to be content with each other. Bach’s “Schafe können sicher weiden” ("Sheep may safely graze") brings the program to a close. The audience can depart having had an evening of high emotions and peace at the end.