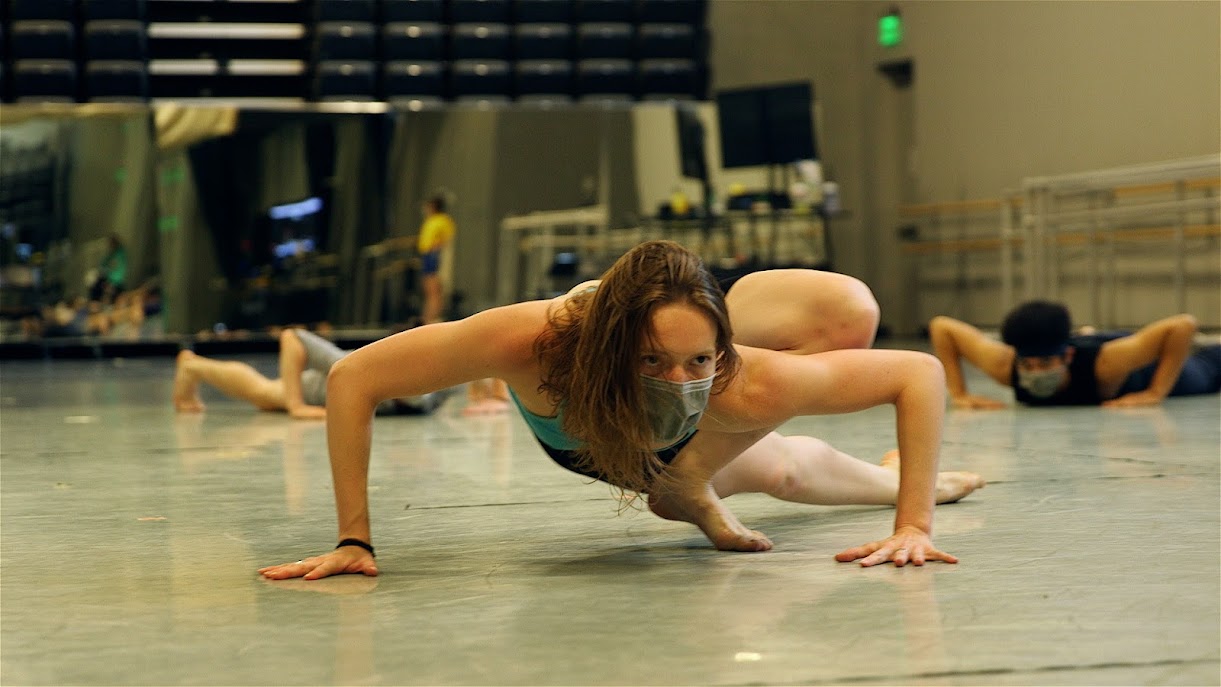 Nothing about North Carolina Dance Theatre's 50th anniversary was predictable when the company was founded in 1970 at the North Carolina School of the Arts. Economics transplanted the headquarters of the troupe to Charlotte in 1990, and their marketing department changed the name to Charlotte Ballet in 2014. Due to COVID, even the year of the jubilee celebration had to be reset to 2021 – and then, because the pandemic lingered, that celebration, scheduled for April, had to be pushed back again to October.

So why should the celebration itself be predictable – all champagne, fluff, fizz, and thanksgiving? This week's program will be capped with a reprise of Salvatore Aiello's The Rite of Spring, a savage, primal spectacle set to Igor Stravinsky's notorious groundbreaking score. Appropriate for April, no doubt, but bold and pagan now that we've endured into October.

"We are not easing back into it," says Kati Hanlon Mayo, who danced the part of The Chosen One – the one who is sacrificed – when The Rite premiered in 1993. "We are not daintily coming back to the theater and doing something light and fluffy. We are back, and we are powerful."

Known as Kati Hanlon back in those NCDT days, Mayo had only recently joined the company when Aiello chose her to be The Chosen One. Now an associate director at the Charlotte Ballet Academy, Mayo is coaching her successors, Amelia Sturt-Dilley and Sarah Lapointe, both of whom are beginning their seventh seasons with the company.

Asserting the power of dance was as much on Aiello's mind in 1993 as reminding the community is now. Famously, the premiere Stavinsky's incendiary score with Vaslav Nijinsky's outré choreography provoked a sensation at its 1913 Paris premiere, nearly a riot. So, the Aiello premiere 80 years later in Charlotte was presented with some trepidation.

"We were fairly new to Charlotte," Mayo recalls, "and we were doing some really wonderful rep, but I think he really wanted to show the limits of what he could do, like test the waters with the audiences here in Charlotte and see how that would pan out. I remember being a little bit anxious, nervous about the audience reaction even when we premiered it in Asheville. I didn't know if it would be just too much – you know, too different from what they would expect, like a ballet with tutus."

To create music and choreography that will consume audiences with their power, it is almost axiomatic that both the composer and the choreographer themselves must be consumed. Then it's the dancers' turn.

"We all knew that Sal really wanted to do his version of The Rite of Spring," Mayo says. "He had spoken to us about it. He was almost obsessive about the score and his research and the work that he was doing. Sometimes you would see him on lunch breaks, just working out choreography, working on counts. So when it came to us, for me personally, I was not used to contemporary work like that, and such tribal – like bombastic – music and dance, but for some reason, between Sal and myself and the rest of the company, it just clicked."

Jerri Kumery, currently the ballet master at Richmond Ballet, was Aiello's associate artistic director when his masterwork was in development, taking every choreographic note, passing along every correction, and giving out "The Bible" – notations on Stravinsky's entire score – to all the dancers. Curator of The Salvatore Aiello Trust, it is Kumery who now brings the spirit of choreographer to rehearsals at the Patricia McBride and Jean Pierre Bonnefoux Center for Dance, while Mayo brings the authentic essence of The Chosen One.

Along with "The Bible."

"Very thick," says Lapointe, describing this holy writ. "All counts of every single section. And it's very helpful, very detailed. It's amazing."

Amazing enough that it was performed again and again in Charlotte in 1993, 1996, 1997, 2000, and lastly in 2003, more than seven years after Aiello's untimely death in 1995 at the age of 51. If the success of NCDT's Rite of Spring paved the way for the audacity of Angels in America in 1996, the resulting furor of the Angels controversy sent shockwaves back to the dancers: Mayo vividly remembers "being very frightened that we would be asked not to perform" in 1997.

The spectacle has a visceral impact. Taken back to pagan ritual, tribal warring, intoxicating dance, and human sacrifice – while witnessing the combustible power of the dances and the rituals – we may ruefully note how little humanity has changed over the eons. Although Lapointe assures us that the dancers will not be attired like the infamous rioters in DC on January 6, the point will resonate.

As we experience the incantatory derangement of Stravinsky's music and watch an entire tribe go haywire, both Mayo and Lapointe hint that there's more than a little voodoo magic in being out there, centerstage, and knowing that you have been chosen to bring the sensational role of The Chosen One to life – and death.

"We have to come up to the music," Mayo says, "and we have to go beyond what the music is delivering to the audience. And that's the challenge. And that's what I think we find so beautiful in his choreography is that it's not hard to get there with the movement he's given us. It's easy to match that music, which is a tall order."

You will have to wait for this climax, of course. Lapointe and Sturt-Dilley won't be appearing until about halfway into Aiello's 40-minute ballet, entering with a bevy of young maidens. Then there's the drama of being chosen for the ultimate sacrifice before we go hurtling into it. And yes, The Chosen One gets swept away as surely as the audience does.

"There's parts where I feel like a wild animal," Lapointe exclaims, "and I just feel so rambunctious, so wild, so free and natural. It's a feeling like no other, really. Yeah, the music, the costumes, everyone around you banging on the floor, it all comes together – just how it's supposed to. It's kind of surreal. I don't think I've ever done a piece that just makes it come out of you like that."

The Rite of Spring will be the longest piece in Charlotte Ballet's 50th anniversary celebration, its obvious pièce de resistance, and the rousing finale. Lapointe dances The Chosen One at the Thursday and Saturday night performances and Sturt-Dilley takes over the lead on Friday. Both are appearing in the other three pieces as well. First in the running order will be a premiere choreographed by Charlotte Ballet II program director and interim artistic director Christopher Stuart, set to a Philip Glass score to be played by the Charlotte Symphony Orchestra. A longer piece, Crystal Pite's A Picture of You, comes next, followed by Val Caniparoli's even longer Ibsen's House.

The human sacrifice at the end of the evening shouldn't be dismaying. More than a couple of religions celebrate the mysteries of death and rebirth, and The One Who Dies is at the heart their power. You can be sure the ancient mojo of Aiello's Rite hasn't been lost on the women who have danced in its vortex. The Chosen One's nobility and her awesome dignity come through her acceptance of her fate.

In our ZOOM interview, Mayo and Lapointe intertwined to describe the experience.

"There are many points within the choreography," Mayo began, "where you've found that you're the Chosen One… It's a conflict, but you feel this…"

"…power," Mayo continued. "If you can think of it as something you've been reaching towards, you're honored by it. But yet… It's part of the ritual, and you're not going to end in the best manner… However, it's an honor to be chosen! It's an honor to be that force."

"And to be that," added Lapointe, "for the tribe and for everyone else."

Here's a link to Charlotte Ballet's promotional video on The Rite of Spring. See our sidebar for details on performances.