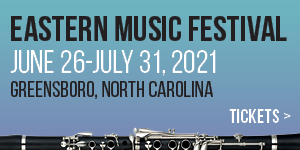 Tuesday night’s lineup gives a nostalgic classic host of chamber music repertoire while offering a fresh venture through modern-day, American composers! July 6, the Eastern Chamber Players kick off the week’s musical ventures featuring C. Schumann’s Three Romances for Violin and Piano, op.22, as well as the classic Brahm’s Piano Trio no. 2 in C major, op.87 and Josef Engel’s Freilechs Dance op. 21. Tuesday evening also features music from Pulitzer Prize-winning composer George Walker, who’s known for being the first African American musician to receive the Pulitzer Prize for Music for the piece Lyrics for Strings. This evening’s lineup will include Walker’s honorable composition, in addition to GRAMMY-nominated flutist and composer Valerie Coleman’s Umoja. Coleman is the founder of Imani Winds (wind quintet) and currently Assistant Professor and Director of Chamber Music at the Frost School of Music, University of Miami.

Friday, July 9, will be the first night EMF audiences will hear performances by our amazing Young Artists Orchestra. Resident conductor José-Luis Novo guides the Young Artists Orchestra in Dukas’ magical classical composition L’apprenti sorcier (otherwise known as the Sorcerer’s Apprentice, famously used in Disney’s original Fantasia [1940]) and Rachmaninoff’s Symphony No. 3 in A minor, op.44. Resident conductor Grant Cooper leads the orchestra’s second half of the program featuring Stravinsky's Russian folklore-inspired ballet suite from L’oiseau de feu (The Firebird), along with Respighi’s Pini di Roma, P.141 (The Pines of Rome). This four-movement work journey’s through a playful first movement, an organum replica of what musically mimics sounds of early church music in Pini presso una catacomb, while ending with a dramatic crescendo in the final movement!

Start your EMF concert experience early on Saturday afternoon, July 10, for the finale of the two-week Euphonium Tuba Institute in a free recital at 5 p.m.  in the Carnegie Room in Hege Library.  The young artists will collectively play in a host of duos, quartets, and assorted chamber ensembles.

Concerts and recitals will be performed in compliance with current local, state, and federal health guidelines, including fewer performers on the stage, social distancing, and wearing face masks. Most performances will be at 8:00 p.m. in Dana Auditorium on the Guilford College campus and limited to 500 socially distanced seats per show, in accordance with current venue capacity restrictions. To note: programs and available seating may change in response to any updated guidelines from the State of North Carolina.

As varied as these season highlights appear, the EMF Experience each summer is so much more than the performance. EMF is an unforgettable learning experience for dedicated young artists from across the nation, an enriching and entertaining social encounter for our patrons, and a celebration of incredible artistry.